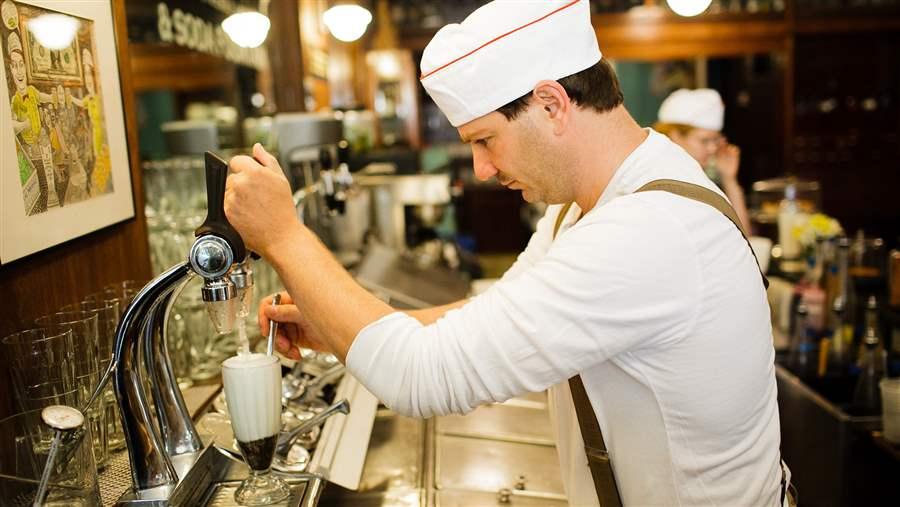 Peter Freeman, the “head jerk” at Brooklyn Farmacy and Soda Fountain, says a New York ban on credit card surcharges violates his freedom of speech. The U.S. Supreme Court has agreed to hear a case brought by Freeman and other New York merchants.

The stylists at Expressions Hair Design, a salon in upstate New York, used to display a sign near the register telling customers who wished to pay with a credit card that they would be charged an additional fee to cover the cost. Then a client told them they ought to take it down.

And in New York, it is. The state is one of 10 that allow businesses to charge more for credit card purchases only if they describe the difference as a cash discount and not a credit card surcharge.

The owners of Expressions Hair Design in Vestal, along with other New York businesses that have sued the state over the law, say their freedom of speech is being impinged on because they can’t explain to customers how credit card fees affect their bottom line.

Their case, Expressions Hair Design v. Schneiderman, is slated to come before the U.S. Supreme Court early next year. A decision in the case also is likely to be felt in nine states with similar laws (California, Colorado, Connecticut, Florida, Kansas, Maine, Massachusetts, Oklahoma and Texas). And, given the reach of big retailers and the growth of online sales, it could influence how merchants in other states do business, too.

“All these laws are really doing is regulating speech in a way that favors credit card companies because it masks the costs of credit to consumers,” said Deepak Gupta, the consumer rights lawyer representing Expressions, where his mother gets her hair done. Under the laws, he said, “you can say the glass is half full, but you can’t say it’s half empty.”

But New York Attorney General Eric Schneiderman argues the law doesn’t restrict speech but that it just stops businesses from adding fees to their posted prices, something he describes as a consumer protection. Those who break the law can receive up to a year in prison. 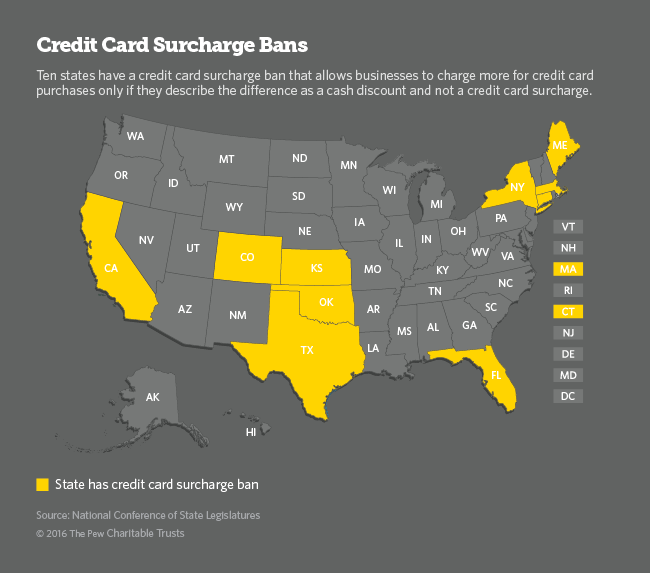 The New York business owners say they want to be permitted to stress surcharges over discounts because of what behavioral economists call the “framing effect,” which shows that people react more strongly to perceived penalties than to rewards — and that surcharges are a more effective way to get customers to choose cash over credit cards.

“When consumers are offered a small discount for paying in cash, they are often willing to ignore it for the sake of convenience, treating the discount as a lost opportunity cost,” seven professors who study behavioral economics wrote in a friend-of-the-court brief filed in June on behalf of the businesses. “When consumers are asked to pay a premium on top of the perceived base price, however, they perceive it as an out-of-pocket cost.”

Credit card companies have not taken a formal position on the New York case. MasterCard declined to comment on the case, as did the Card Coalition, a trade association that represents several major credit card companies including Visa and Discover and focuses on state legislation and regulation.

But credit card companies have a long history of trying to block surcharges. In 1976 Congress blocked merchants’ ability to tack on surcharges to credit card purchases. In 1984 those provisions expired, and some states began to pass their own credit card surcharge bans.

But for many businesses, it was not state law but contracts with credit card companies that prohibited the surcharges. Those restrictions were scaled back after a 2013 class-action suit brought by retailers. But in the 10 states with surcharge bans, businesses cannot charge credit card customers more to cover the cost of swipe fees.

Federal circuit courts have reviewed the surcharge laws and are split on the issue. The New York and Texas laws were upheld by judges who ruled that the laws are permissible regulations on commerce, not restrictions on free speech. But laws in California and Florida were struck down.

In Florida’s 11th U.S. Circuit Court of Appeals, judges sided with businesses who argued their free speech was being curtailed. By a “simple slip of the tongue,” the court said, a business owner “runs the risk of being fined and imprisoned.”

Extra for an Egg Cream?

Peter Freeman, the co-owner and “head jerk” at Brooklyn Farmacy and Soda Fountain and a plaintiff in the Expressions case, said credit card swipe fees are his biggest business expense after rent and payroll. He estimates he spends $15,000 a year on the 2 to 4 percent swipe fees that credit card companies typically charge to cover the cost of processing payments.

It’s important to accept credit cards to stay competitive, he said, and it’s a convenience he wants to offer customers. But Freeman said he would prefer to add surcharges to the bill that correspond with fees from the card — lower rates for debit cards and higher ones for cards that carry rewards and come with higher swipe fees.

“I don’t want to make money off the surcharge. I’m just trying to cover the cost of their convenience. They’re getting their rewards and I’m paying for their rewards. I think if there was education, if customers were aware of what was going on … they don’t want to put that on me or on my business,” Freeman said.

Gupta’s brief points to a New York City gas station owner who was brought to trial in 1986 after his attendant told a customer that it would cost five cents “extra” to pay with a credit card. A state court vacated the conviction, finding that businesses should be punished only for improperly charging customers, not for how the charges are described.

But Schneiderman, who is defending New York’s law in the Expressions case, argues that the state is not restricting business owners’ speech. Instead, he said, it is a permissible regulation on business designed to protect consumers.

“New York’s credit-card surcharge prohibition does nothing more than prevent sellers from the conduct of extracting charges above their regular, posted prices,” he wrote in his brief to the court.

Schneiderman wrote that the law was modeled after the former federal statute. “The federal prohibition was intended to prevent sellers from using surcharges to extract windfall profits; to avoid consumer confusion and unhappiness caused by the imposition of extra charges above the posted price; and to stop fraudulent and deceptive sales tactics by sellers who could lure consumers with a lower sticker price but then surprise them with a credit-card surcharge at the point of sale.”

Gupta said it’s perfectly reasonable for the government to enact regulations that stop businesses from boosting profits by charging customers more than what they pay in swipe fees. But, he said, the New York law seeks to regulate how businesses communicate with their customers about the credit card fees.

Carolyn Shapiro, a professor at Chicago-Kent College of Law and a former Illinois solicitor general, said if the Supreme Court views the laws through a First Amendment lens, it could put more pressure on states.

“States have a great deal of ability to regulate economic activity — that’s part of the core of states’ police powers,” she said. “If it’s purely economic it’s mainly OK, but if it’s a First Amendment issue, states have to meet a higher burden to defend their regulation.”

A few large businesses like Walgreens and Albertsons have submitted a brief in support of the small businesses challenging the New York law. But some groups that represent businesses and consumers have taken a more nuanced view of the laws.

Linda Sherry with Consumer Action, which represents consumers and filed a brief in favor of the businesses, said her group prefers that merchants offer discounts for using cash and does not like surcharges. But the group also thinks credit card fees should be more transparent to consumers.

“These companies are prohibited by state laws from telling people about the cost of credit card use and we don’t think that’s fair,” she said. “Consumers might well make different choices if they knew what was going on behind the scenes.”

Even if the ability to add surcharges became more widespread, it’s not clear that many businesses would take advantage of it.

J. Craig Shearman, a spokesman for the National Retail Federation, said many businesses want to use the ability to pass swipe fees on to customers as a bargaining chip with credit card companies.