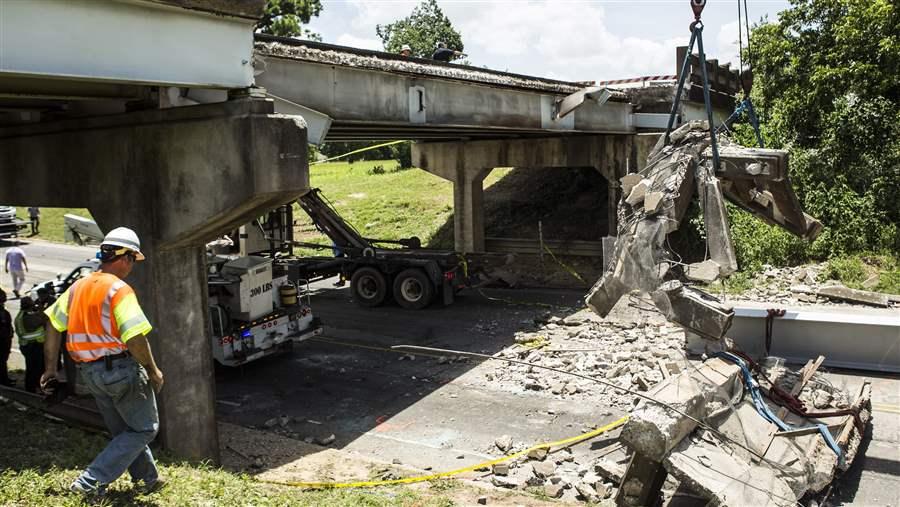 Texas transportation workers in July survey the damage from a bridge collapse in which a child died. President-elect Donald Trump has proposed fixing dilapidated infrastructure.

If President-elect Donald Trump is successful with his proposed $1 trillion, 10-year program to fix America’s disintegrating and inadequate infrastructure, the states have a list of critical projects handy for him. And while a trillion could be a decent down payment, it’s not nearly enough.

The American Society of Civil Engineers estimates that fixing all the roads, bridges, public transit, railroads, energy systems, schools, public parks, ports, airports, waste systems, levees, dams, drinking water facilities and hazardous waste installations in the 50 states and the District of Columbia would take $3.6 trillion by 2020. That’s a little over three years from now, not the 10 years Trump is touting.

The civil engineers group has ranked the states with a “report card” on their infrastructure. No state scored higher than a C-plus. The country scored a D-plus.

That the nation’s dilapidated infrastructure appears high on the agenda of the incoming president heartens many state officials. But they’re concerned over the financing.

“The fact that [Trump] seems to go back to infrastructure as a priority, even when he’s not specifically asked about it, does lend itself to the belief that it is one of the bedrock priorities of the new administration,” said Joung Lee, policy director of the American Association of State Highway and Transportation Officials.

However, Lee said, a key part of dealing with infrastructure has to be on the “spending side,” i.e., taxes to finance the work. That’s a topic Trump is less inclined to talk about.

Instead of tax hikes, Trump has proposed a series of tax credits for infrastructure. He maintains that the money lost to the U.S. Department of the Treasury through the tax credits would be made up by increased personal income taxes paid by workers hired on the projects and by business taxes paid by the construction companies that hire them.

University of California-Irvine business school professor Peter Navarro, a Trump adviser, estimated that every $200 billion in additional spending on infrastructure creates $88 billion more in wages and increases the nation’s economic output, or gross domestic product, by more than 1 percentage point. Navarro also said the Trump plan would provide “maximum flexibility to the states” by streamlining permits and approvals.

In a sentiment echoed by many state leaders, Rhode Island Democratic Gov. Gina Raimondo told reporters in Providence that she would be happy to accept Trump’s proposal. “We can certainly use that money for airports, money for trains, train stations and train tracks, money for roads and bridges, money for Wi-Fi,” she said.

Her spokesman, David Ortiz, amplified the statement but noted that for the program to be effective it would have to be financed by “more than just tax credits.”

Much of the nation’s transportation system is a state-federal responsibility, and the federal government hasn’t been investing in its share of the partnership.

Late last year, President Barack Obama signed a $305 billion transportation bill to fund roads, bridges and rail lines for four years, the longest reauthorization of federal transportation programs in more than a decade. However, the bill fell short of Obama’s $478 billion plan and it didn’t include an increase in the federal gasoline tax.

Congress hasn’t raised the federal gasoline tax — the nation’s most reliable source of revenue for financing roads, bridges and public transportation —since 1993. As a result the gas tax isn’t keeping up with inflation, let alone a growing backlog of repairs. Nor is it producing as much revenue, as motorists have turned to more fuel-efficient vehicles.

The last time the federal government undertook a big transportation construction program was in 2009, during the Great Recession, when the American Recovery and Reinvestment Act, otherwise known as the stimulus, was enacted. Its purpose was twofold: to build things and to put people back to work.

The “back to work” piece seemed the most important, and state officials were ordered to provide a list of “shovel ready” projects that could be undertaken immediately to fulfill the workforce goals. Critics said that meant larger, more ambitious construction projects went by the wayside.

In its final report on the effects of the stimulus, the Obama White House said it had improved more than 40,000 miles of road and fixed or replaced 2,700 bridges. But, with about 58,000 bridges needing repair, the stimulus barely made a dent.

In the absence of an aggressive and reliable federal infrastructure program, many states decided they could wait no longer as their highways and bridges crumbled and public transportation repairs languished.

This month New Jersey increased its gasoline tax by 23 cents to 37.5 cents a gallon to pay for road, bridge and commuter railroad repairs.

It was the state’s first increase in the gasoline tax in decades and brought New Jersey’s price at the pump closer to neighboring New York and Pennsylvania, whose residents had been crossing the border for less-expensive fill-ups. New Jersey officials maintained that little revenue from out-of-staters would be lost because the tax is still 13 cents lower than Pennsylvania’s and 5 to 10 cents lower than New York’s.

Republican Gov. Chris Christie, a close Trump adviser during the campaign, signed the increase, saying it was badly needed to fix the state’s very old infrastructure.

“New Jersey is the most densely populated and congested state in the nation and our roads and bridges are among the oldest in the nation,” said New Jersey Department of Transportation spokesman Steve Schapiro.

Schapiro said about 9 percent of the state’s bridges are “structurally deficient,” and 58 percent of its highways are in “good” or “fair” condition. “We are far from our goal of 80 percent of roads in acceptable condition by 2021, and additional funding will help make the investments needed to meet this goal.”

Other states also have raised their gasoline taxes in the last few years. Georgia passed a 6.7-cent-a-gallon increase that took effect in 2015 and includes adjustments to keep up with inflation. Idaho and Iowa hiked their taxes 7 cents and 10 cents a gallon, respectively. Nebraska enacted a 6-cent-a-gallon increase over Republican Gov. Pete Ricketts’ veto.

In Utah, a 4.9-cent hike took effect Jan. 1, which also tied future increases to inflation and fuel prices. And Washington state imposed an 11.9-cent-a-gallon increase in two steps: a 7-cent increase last summer, and then a 4.9-cent increase this summer. In Michigan, gasoline and diesel taxes will rise by 7.3 cents and 11.3 cents, respectively, Jan. 1.

Not every state has followed suit, though more may soon.

“There are still 20 states that have waited a decade or more since last raising their gas tax rates,” said Carl Davis, research director at the Institute on Taxation and Economic Policy, a progressive think tank. “At least a dozen states are going to be discussing gas tax increases next year.”

Snyder convened a special infrastructure commission to assess the state’s needs and make recommendations for projects and how to pay for them. The commission is scheduled to report Nov. 30, just in time for Trump to ready his transportation program and see exactly what at least one state, Michigan, is looking to build or repair.

Other states are ready to pounce on construction projects, as well, should the president-elect be able to follow through on his campaign promise. Among the big ones that have been on drawing boards:

Brian Pallasch, director of government relations and infrastructure initiatives at the civil engineers organization, said the nation’s cracking and crumbling infrastructure could cost the economy $3.9 trillion by 2025 and costs families $3,400 a year.

Pallasch said the economic toll was measured by tallying the cost of broken water mains that cause restaurants to close, power outages, bridges that can’t take the weight of big trucks and force them to take detours, and the ridiculous amount of time workers spend commuting on congested roads.

"Part of our message is, we need to make these investments not only to improve our economy, but also to give people something back,” he said. “Maybe they are paying a little bit more, but they may be getting something back that will allow them to get a couple of hours back a week in their commute.”