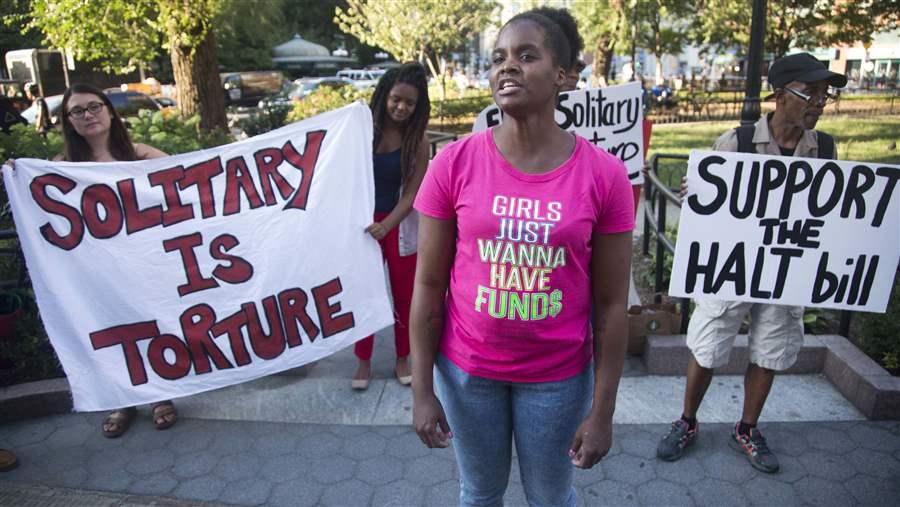 Editor’s Note: This story has been updated to correct the number of California inmates moved out of solitary confinement.

Last month, New Jersey lawmakers voted to stop isolating prison inmates for as long as 23 hours a day for months or years on end after deciding it was abusive and hampered a return to society.

If Republican Gov. Chris Christie signs the bill, juvenile, pregnant, elderly, mentally ill, gay and transgender inmates will no longer be put in solitary confinement in state prisons and local jails because isolation could be particularly harmful to them. For all other inmates, solitary will be a last resort. It will be limited to no more than 15 days at a time, and a physician, clinical psychologist or psychiatric nurse will monitor the inmates.

New Jersey is the latest state to move to limit the use of solitary confinement, as legislatures continue to take a hard look at their criminal justice systems and weigh whether long-held practices of incarceration create more problems than they solve.

“Abuse of solitary confinement is proved to cause mental illness, bitterness and anger, and to make reentry into society much more difficult,” said Democratic state Sen. Raymond Lesniak, who sponsored the New Jersey bill. “Its use is definitely on the way out.”

Last year, as many as 100,000 inmates spent time in solitary confinement, also known as segregated, administrative or restrictive housing, in federal and state prisons and local jails. Many are not violent. Research indicates that solitary confinement can cause long-term psychological trauma and brain damage even among mentally healthy prisoners. It may not serve as a deterrent to bad behavior, or protect prisoners and guards. And it doesn’t prepare inmates for life outside of prison.

At least a dozen states besides New Jersey have placed restrictions on the use of solitary confinement — a tool used by wardens for decades to discipline prisoners, safeguard high-risk prisoners from violent inmates and safely contain “the worst of the worst.”

In September, Democratic Gov. Jerry Brown of California signed legislation restricting the practice for juveniles. In June, North Carolina prison officials announced they would no longer place inmates under age 18 in solitary confinement. In its place, the state began to emphasize treatment, rather than punishment, for young offenders.

Some states are restricting solitary confinement as a result of high-profile cases of abuse or litigation brought by inmates:

A United Nations report issued last month found that the use of solitary confinement in U.S. prisons was akin to torture and was a “human rights crisis.”

Even before the report, President Barack Obama in January banned its use for juveniles in federal prisons.

In the last five years, Colorado, Delaware, Louisiana, Maine, Massachusetts, Michigan, Nebraska, New Mexico, Oregon and Texas have passed legislation that either drastically restricts solitary confinement in state prisons, or orders a comprehensive study on potential reforms, according to the National Conference of State Legislatures.

Just about every state is looking at ways to limit the use of solitary confinement, said Sara Sullivan, a sentencing and corrections  project manager for the Vera Institute of Justice, a New York-based research and advocacy group. Some states are trying to act before they are sued.

The push to restrict or get rid of solitary confinement represents a departure from previous decades. In the 1980s and 1990s, in the midst of the war on drugs, the use of solitary surged. Prisons were straining at the seams, overrun with violent gangs. Prison officials used it as a disciplinary measure, a way to quell the disruptions and to keep the most violent — and the most vulnerable — prisoners isolated.

“In the prison setting, where murders and riots and terrible things happen, you have to have the ability to remove those inmates from that environment for a certain amount of time,” said Kernan, California’s corrections chief. “There need to be sanctions for criminal behavior.”

It’s not clear whether solitary confinement serves as a deterrent to bad behavior. Some research has shown that it increases recidivism rates, but the studies were limited and not national in scope.

The New Jersey Department of Corrections opposes the solitary confinement bill on Gov. Christie’s desk. Officials say the law is too broad, is not practical and does not give them the leeway to handle dangerous inmates. They argue the state does not have solitary confinement, but a variety of “restrictive housing” units that provide inmates with social services and health care.

According to a report by the Vera Institute last year, most prisoners held in solitary confinement are not there because they are actually violent, but because they have been categorized as being potentially violent, such as being a gang member.

Others, such as the mentally ill, gay or transgender inmates, or young people convicted of adult crimes, are placed in isolation because prison officials think they will be at risk in the general population.

A quarter of mentally ill inmates in the U.S. have spent time in solitary confinement. Nearly 30 percent of lesbian, gay and bisexual inmates were held in lockdown in between 2011-2012, the most recent year for which data is available.

The majority of inmates are in solitary for nonviolent infractions, such as smoking, refusing to obey an order or possessing low-level contraband like non-prison issue underwear.

In July, Nebraska started using new rules for the use of solitary confinement following a high-profile case involving a mentally ill inmate. Nikko Jenkins went straight from solitary confinement to being a free man, even though he’d asked to be released to a psychiatric facility. In 2013, within weeks of his release, Jenkins killed four people.

The new regulations require prison officials to conduct regular reviews for prisoners in lockdown and to rely on alternative methods for disciplinary infractions, such as loss of privileges.

While states actively explore new limits and alternatives to lockdown, Sullivan said that just like in Nebraska, state prison officials will not completely abandon its use.

“People are trying to figure out, ‘What does the new version of solitary confinement look like that still keeps people safe, but puts them in the least restrictive situation?’ ” Sullivan said.

Not all corrections officials think they need the widespread use of solitary confinement to control prison populations. And they fear that its abuse can create worse problems than it solves — especially when the inmates are released from prison and return to society.

In 2013, Colorado’s corrections chief, Tom Clements, a reform advocate, was gunned down by a former inmate who’d been held in solitary confinement for most of his sentence.

His replacement, Rick Raemisch, wanted to understand the stresses of life in solitary, so he put himself in the hole for 20 hours. The experience left him committed to drastically reducing, if not abolishing, solitary confinement.

“Twenty hours was a grain of sand on a beach,” Raemisch said. “But I didn’t need more time in there to know that absolutely no good would come from it.”