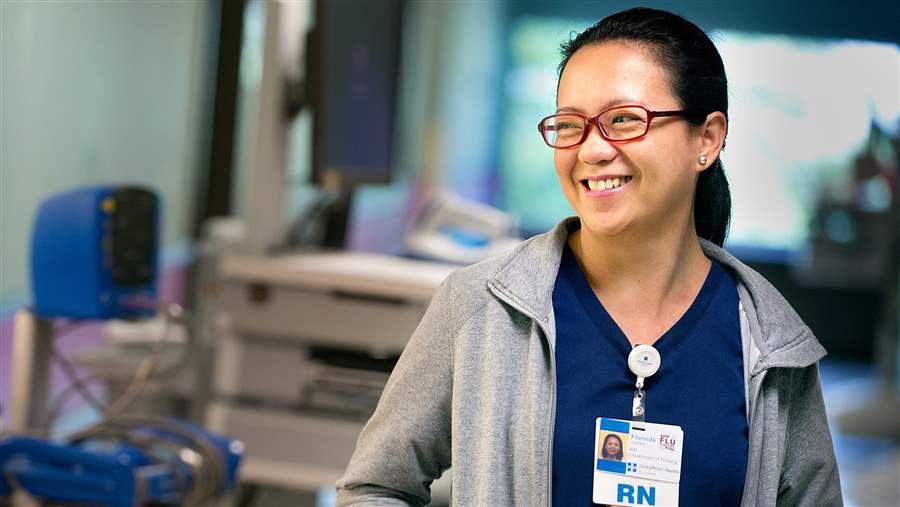 HOUSTON — The skyscrapers at the Texas Medical Center are filled with hospital beds. The commuters waiting in the heat for the train wear scrubs. The young woman dodging traffic on a bicycle may be studying to be a doctor, a nurse or a dentist.

Houston is known for its energy jobs, but registered nurses are the most in-demand workers in town.

“Whatever jobs we have, we keep expanding. And our competitors are doing the same,” said Thomas Vernon, a human resources director for Houston Methodist, which has a large hospital at the medical complex here. Last year the health system hired about 1,200 nurses across its seven hospitals.

Nursing jobs in Houston sit open for a long time. It takes Houston Methodist an average of 55 workdays to hire an RN. Nationally health care jobs take longer to fill than jobs in most other industries: 49 workdays as of the last count in September, according to DHI Hiring Indicators, a research group.

It’s tempting to argue that nurse hiring difficulties, in Houston and across the nation, would go away if more people graduated from nursing programs. And many cities do need more graduates — but that’s not the only problem.

Hospitals, nursing homes, home care agencies and doctor’s offices, like a lot of employers across the country, have a specific resume in mind. Employers often want new hires to have experience in a specialty such as operating room nursing. They may not be able to raise wages to easily attract that experience. Meanwhile many new nurses, armed with a degree that’s supposedly a ticket to the middle class, struggle to land their first job.

Colleges aren’t equipped to deal with this disconnect. Some employers, such as Houston Methodist, are addressing the problem by beefing up their internships and in-house training. New York City is testing a transition program to help new nurses get work experience.

A long-term solution for the nursing workforce also would have to resolve critical pay issues, including whether Medicare and Medicaid fee schedules support competitive wages, and figure out how to make sure nurses don’t get burned out and quit.

Most nurses are RNs, the single largest occupation in the sector that’s set to become the nation’s largest. They’re the millions of men and women who give patients their medicine, monitor their vital signs and symptoms, and help them understand how to manage their conditions at home. Licensed practical and vocational nurses, who are credentialed at a lower level than RNs, provide more basic care, such as helping patients dress.

Over the past decade people have flooded into nursing programs at two- and four-year colleges, seeking good jobs in a growth industry that’s all but recession-proof. The federal government projected that by 2025 the nation would have more nurses than it needs, but the study didn’t consider the potential need for nurses in new roles as the health care system changes.

Today, as the number of graduates continues to rise, employers are increasing their requirements. A decisive shift occurred in 2010, when the nonprofit Institute of Medicine, now the National Academy of Medicine, recommended that 80 percent of all nurses earn a bachelor’s degree by 2020.

A generation ago, all RNs had to worry about was getting their nursing license, which they could do without going to college by completing a nursing diploma or certificate program at a hospital. Now nurses with an associate degree, who still make up 40 percent of newly licensed nurses in Houston, have trouble getting an interview, let alone a job at a prestigious hospital.

Many employers across the country raised their degree requirements during the Great Recession, according to Burning Glass Technologies, a company that analyzes online job postings. It’s not clear whether this was because there were so many desperate job seekers that companies could afford to be picky, or because higher skills really were needed — or both.

The decision to hire nurses with higher degrees was backed by research that found that patients did better at hospitals with more highly educated nurses. But there was an opportunistic element to it in some places, too.

In New York, for instance, there are more licensed RNs in the state than there are jobs for them. “So employers are raising the bar, saying, ‘Hey, if I can get a [nurse with a] bachelor’s degree, why not?’ ” said Jean Moore, director of the Center for Health Workforce Studies at the University of Albany.

Employers also want to hire nurses with work experience that nursing schools can’t deliver. “People are looking for folks who are, quote, ‘prepared’ to start right away,” said Dr. Catherine Georges, chair of the nursing department at Lehman College, part of the City University of New York system.

So are employers in all kinds of industries. In Texas, employers say that a lack of applicants with work experience is their top hiring issue; finance and insurance companies and utilities were most likely to list a lack of experience as a problem in the state’s most recent employer survey. Graduating more people from traditional college degree programs won’t help fill many of these jobs.

Health care employers say new nurses can’t step into just any job. They can’t yet hang an IV bag quickly or draw blood with steady hands. They need at least six months of on-the-job training and lots of mentoring — expensive investments for any employer. Hospitals do hire and train new nurses, but they can only afford to safely orient so many at a time.

There’s also no way new nurses can fill specialized, high-pressure roles in the emergency department, the operating room or the intensive care unit. Those are some of the toughest RN positions to fill nationwide. At Houston Methodist, some positions that require more experience can take over 86 days to fill. 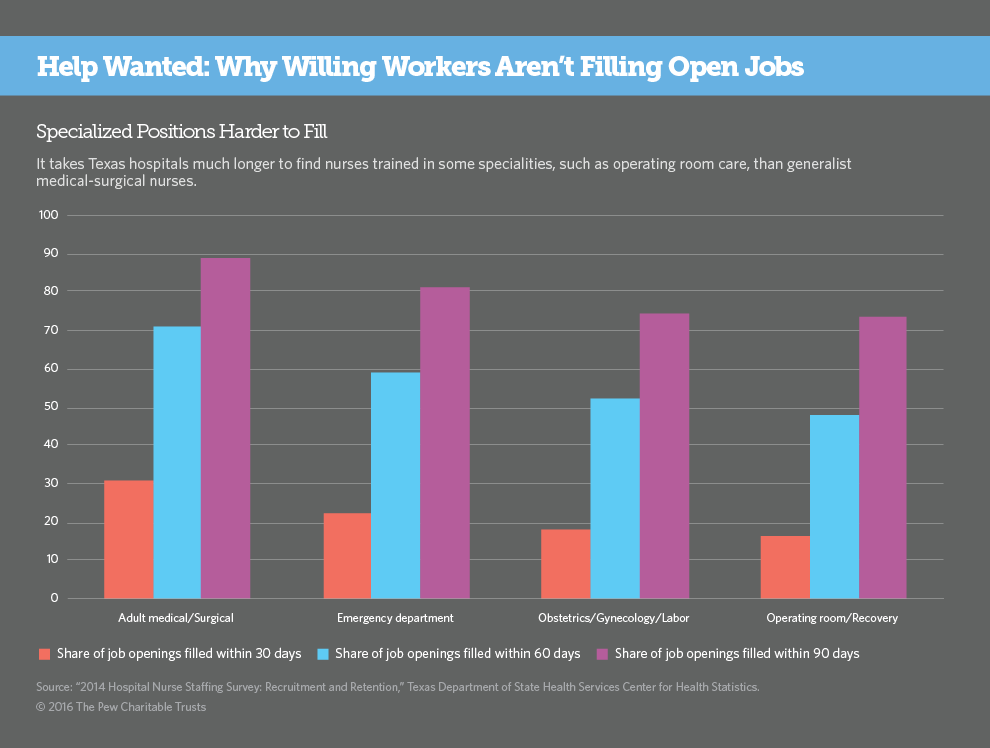 Nursing schools can’t prepare students to step into these jobs because it’s illegal for unlicensed nurses to practice on real live patients. So during their limited clinical rotation hours, maybe 8 to 10 hours a week, students get to practice only basic tasks under close supervision.

The gap between nursing education and job openings isn’t anyone’s fault, said Nancy Spector of the National Council of State Boards of Nursing. “We don’t see that nursing education really is to blame, because as they’re students, they cannot practice independently. But we also don’t blame the institutions, because nursing care has just become so fast-paced.”

Elite hospital systems can offer raises, bonuses and other incentives to attract the perfect candidate. Last year Houston Methodist offered a $10,000 employee referral bonus and a $10,000 sign-on bonus to new nurses — a deal so popular the system barely had to promote it.

When all else fails, the hospital will take on temp workers such as traveling nurses, who charge high hourly rates.

To one economist, raising compensation is an obvious response to a hiring problem. “I’ve never heard of jobs going begging. Remember, this is a labor market. Unless you underpay, you can fill jobs,” explained Peter Cappelli, professor of management and director of the Center for Human Resources at the University of Pennsylvania Wharton School.

But some employers just can’t do that. Low wages consistently create hiring problems for government jobs, from state troopers to prison guards.

Smaller health care providers can’t raise wages, particularly those that rely on public funding such as Medicaid, the joint federal-state health program for the poor and some people with disabilities. “You can’t tell Medicaid, ‘Well, we need to charge more, because we need to pay the nurses more to work nights,’ ” said Dawn Bloomer, a former administrator for a home care agency in Houston.

Nationwide, average RN pay is $35 an hour in a hospital, $33 an hour at a home care agency, and $30 an hour in a nursing home, according to the U.S. Bureau of Labor Statistics. Most home care agencies in Houston can’t even afford to reimburse nurses for gas, let alone invest in training, Bloomer said.

Bloomer specializes in children who need hospital-level care at home. That might mean a child who can’t breathe without a ventilator, or a child with severe cerebral palsy. “Every provider that’s doing this is predominantly Medicaid-funded,” Bloomer said of her specialty. “A lot of people would say the funding is” — she paused — “fair. But it’s not enough.”

Some open nurse positions in home care don’t get filled at all, she said.

Location affects nurse hiring too, as in any other industry. Rural hospitals along the Texas border have more trouble hiring nurses than hospitals in nonborder cities. Home care agencies in rural border regions spend an average of six weeks looking before they fill jobs for nurses with at least a year of experience, according to state surveys.

Employers also have a retention problem. Being a nurse is demanding, and new nurses, like new teachers, are particularly likely to leave their jobs: About 20 percent of new nurses quit within a year, according to a 2014 study.

Some nurses say that their professional culture doesn’t help matters. There’s a saying that nurses “eat their young,” meaning that more experienced nurses often bully newcomers. This kind of hazing isn’t unique to nursing; it’s also common in the skilled trades, for instance. But it helps push rookies out of a profession that needs them.

To bridge the gap between nurse supply and demand, policymakers can do a few things, such as offering student loan assistance to nurses willing to relocate to a rural area. States can appropriate Medicaid money specifically to allow home care agencies and nursing homes to give staff a raise.

Many employers are investing more in on-the-job training. Houston Methodist, like a growing number of hospital systems, puts new nurses through a paid six-month “nurse residency.” It hires about 350 new bachelor’s degree graduates into the residency each year.

The hospital has also created better pathways into specialties. At other hospitals, it would be rare for a recently licensed nurse such as Brenda Clark, 36, to land a job in the labor and delivery unit. But an internship with Houston Methodist before she graduated, plus a residency position in the same unit, allowed her to move straight into a specialty she loves.

The hospital has found that its supportive residency program helps new nurses stick around, said Carole Hackett, the senior vice president for HR at Houston Methodist.

The American Organization of Nurse Executives, a subsidiary of the American Hospital Association, wants the government to step in to help fund nurse residencies. “There’s graduate medical education that’s out there, but nursing, typically, has not really received funding for that,” said the group’s CEO, Maureen Swick.

In New York City, the Department of Small Business Services, along with foundations and employers, is testing a six-month course for unemployed and underemployed nurses with bachelor’s degrees called a transition to practice program.

Participants spend two days a week working at a hospital and Saturdays working through online training scenarios or practicing on simulation dummies at Lehman College. They get paid a stipend, but they’re not committed to work for a particular employer when they finish.

“It’s very interesting that when they go for interviews and say they’re doing a transition to practice program, they get hired,” said Nwachi Chigbundu, who teaches the Lehman program. When she started her first nursing job, 25 years ago, she remembers going through a six-week orientation. “It’s not really enough, because nursing is really complex.”