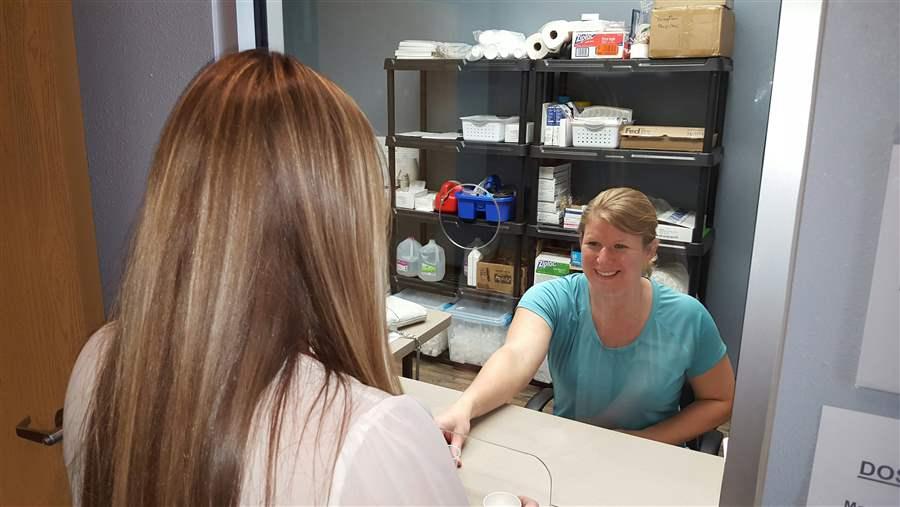 When Rebecca Schmaltz found out she was pregnant with her second child, she tried to quit heroin cold turkey. She stopped injecting for a day or two, became sick with withdrawal symptoms, and relapsed. She kept trying, though, to kick the habit on her own.

Finally in her fourth month of pregnancy she passed out from severe withdrawal symptoms and ended up in a hospital. When she woke up, she learned a doctor had given her methadone to eliminate her symptoms, which can be life-threatening to the fetus.

Her doctor told her she would have to stay on daily doses of methadone for the rest of her pregnancy or risk more hospitalizations and possibly lose her baby. But methadone wasn’t available in her hometown of Minot, North Dakota. In fact, the nearest clinic was nearly 450 miles away in Billings, Montana.

Schmaltz’s predicament is not unusual.

Despite the nation’s decadelong surge in opioid addiction, large swaths of the U.S. still lack specialized opioid treatment centers that can dispense methadone, one of three medications available to treat addiction to heroin and prescription pain pills.

The other two medications, buprenorphine (approved by the Food and Drug Administration in 2002) and Vivitrol (approved in 2010), can be prescribed by doctors. But for some patients, particularly those who have built up a high tolerance for opioids through prolonged use or high doses, methadone can be the only addiction medication that works.

Although research has repeatedly proven methadone’s effectiveness at eliminating withdrawal symptoms, quelling drug cravings, and keeping people in treatment, it has been plagued by stigma and misinformation since its development in 1964. A long-acting opioid, originally developed and still used to treat pain, methadone normalizes the brain and satisfies the body’s physical dependence on opioids without producing a high.

Still, many in the medical community and addiction counseling field adhere to the discredited belief that because the methadone molecule is similar to heroin its use amounts to “trading one drug for another” or “one addiction for another” and does not mark true recovery.

Another common misconception about methadone is that it gets diverted from addiction treatment clinics to street markets and ends up killing people. According to data collected by the Centers for Disease Control and Prevention, the methadone that is killing people is the tablet form of the medication, which originates in pain clinics and is widely prescribed to low-income Medicaid patients.

Buprenorphine, also an opioid, is starting to garner a negative reputation because it is diverted to street markets and prisons in many parts of the country. But because the addiction medication can be picked up at a drugstore and taken in private, people who rely on it to stay in recovery are much less stigmatized.

The other alternative, Vivitrol, is a long-acting injectable form of naltrexone, a drug that blocks the euphoric effects of alcohol and opioids. Although research on its long-term effectiveness is not as conclusive as it is for methadone and buprenorphine, Vivitrol is favored by many, including drug courts, prisons and jails, because it is not a narcotic and the monthly injection cannot be diverted.

According to the American Society of Addiction Medicine, all three medications should be considered for people with an addiction to heroin or prescription painkillers. Just as with any other chronic disease, one medication may work for certain patients, while the other two may not.

In 2014, more than 28,000 people died of an overdose of opioid painkillers or heroin, and an estimated 2.5 million were addicted to opioids.

Methadone is highly regulated, requiring patients to show up at a specialized clinic every day to take their dose while a medical professional watches. Under federal rules, patients who take the medication consistently for six months and are able to stay away from drugs can be granted permission to take home a week to a month’s supply of methadone.

Regulated by the U.S. Drug Enforcement Administration and the Substance Abuse and Mental Health Services Administration, as well as state health agencies and opioid authorities, methadone clinics can be difficult to get started. And some, especially those with limited financial backing, find it difficult to maintain the paperwork and meet the standards for facilities and personnel that are required to stay in business.

For companies trying to open a new treatment center to meet growing demand, city and county zoning boards and licensing authorities also can get in the way.

Although most of the opposition to methadone clinics is based on accumulated rumors and misinformation, some clinics are poorly managed and do not operate in their patients’ best interests, which contaminates the industry’s overall reputation, said Dr. Kenneth Stoller, who runs a methadone clinic in Baltimore that is affiliated with Johns Hopkins Hospital.

Nationwide, roughly 350,000 patients receive daily methadone doses along with counseling and other health services from 1,460 opioid treatment centers, a number that has grown by less than 25 percent in the last decade, according to Mark Parrino, president of the American Association for the Treatment of Opioid Dependence. During the same time, the number of people misusing prescription opioids more than doubled, and opioid overdose deaths have quadrupled since 1999.

West Virginia, the state with the highest drug overdose death rate in the nation, has had a statewide moratorium on methadone clinics since 2007 over worries the medication was being diverted to street markets and killing people.

Georgia this year enacted a one-year moratorium over concerns that at least half of the state’s methadone patients were from out of state. And Alabama lifted a moratorium on new methadone clinics last year only to have one of its most populous counties block the first company to propose a new clinic.

For financial reasons, methadone clinic operators are also discouraged from locating in the 16 states where Medicaid, the federal-state health program for the poor, does not pay for the medication and related services. They are Arkansas, Idaho, Indiana, Iowa, Kansas, Kentucky, Louisiana, Mississippi, Montana, North Dakota, Oklahoma, South Carolina, South Dakota, Tennessee, West Virginia and Wyoming.

Lack of funding is also a deterrent in the 19 states that have not expanded Medicaid to the low-income adults who make up a disproportionately large segment of the opioid-addicted population.

Until August, North Dakota had no methadone clinics. Wyoming still has none, and South Dakota, a state of more than 77,000 square miles, has only one.

In contrast, Baltimore, a city of less than a hundred square miles, has 20 clinics. Boston, Chicago, New York and Philadelphia also have an abundance of methadone clinics, as well as public transportation, making the daily commute less of an issue than it is in rural parts of the nation.

Historically opioid addiction was rare in most of the West and other sparsely populated parts of the country. But once overprescribing of prescription painkillers began to cause many to get hooked about 10 years ago, many small towns and communities saw an influx of heroin.

Schmaltz, 29, got started on opioid painkillers after abdominal surgery in 2010. Within a year, she said, she was addicted. She began doubling her doses and snorting them. At that point her doctor cut her off.

Starting in 2012, she tried treatment with buprenorphine and abstinence-based residential programs, but repeatedly relapsed, as many people with an opioid addiction do. In early 2014, she turned to heroin.

“In the two years that I was clean, heroin had taken over Minot. Pills were impossible to find and heroin was everywhere,” Schmaltz said. A city of 50,000 today, Minot experienced a population boom starting in 2010 when the oil industry began to flourish in the region.

During the same time, Minot Police Chief Jason Olson said the city saw an uptick in crime and illicit drugs. “About three years ago, we started seeing a huge spike in heroin and prescription opioids,” he said.

JoAnne Hoesel, who was director of the state’s substance abuse agency at the time, said “people started calling into the division looking for treatment starting about five years ago.” With the oil boom, she said, “We had people coming into the state assuming they could continue treatment, but they found out differently. One worker had to fly back to Wisconsin every month.”

Hoesel said the state agency was eager to attract methadone clinics and had the authority to do so. But rather than risk controversy, she said it decided to seek the Legislature’s endorsement, which came in 2011. By 2014 the agency had written regulations to govern methadone clinics.

To protect her unborn baby, Schmaltz said, she decided to continue taking methadone no matter the price. It wasn’t feasible to commute from Minot for methadone, so she moved in with a relative in a tiny town, more than 700 miles away in northern Montana, where the drive to the nearest methadone clinic in Kalispell was only an hour and 15 minutes. Her fiance and 6-year-old daughter stayed in Minot.

After her son was born in January 2015, Schmaltz prepared to go home. The clinic in Kalispell helped her get federal permission to take home a two-week supply of methadone. But once she was back in Minot, she had to travel nearly seven hours — each way — to Billings every two weeks to replenish her supply.

Schmaltz didn’t know it, but the company that owned the Kalispell clinic, Community Medical Services, had been trying for three years to establish a clinic in Minot.

According to CEO Nick Stavros, it was relatively easy to convince the state health agency and the Legislature that North Dakota, with its booming oil towns, needed more addiction treatment options. Parrino of the national association flew out to testify on the industry’s behalf.

Looking back, Olson said most of his opposition was fear of the unknown. He had heard that methadone clinics attract an unsavory clientele, and that loitering and crime can increase in the surrounding neighborhood. But he said that after checking with Montana police in towns that already had methadone clinics he realized it wasn’t an issue.

Still the city placed a one-year moratorium on opening a methadone clinic shortly after city leaders heard about Stavros’ plans. After leasing a building and hiring staff, the company had to suspend operations until the city decided what to do.

To convince city officials to allow him to open a clinic, Stavros commissioned a poll that showed a majority of residents of Minot and two other North Dakota cities, Bismarck and Mandan, considered drug addiction in their communities a significant problem and supported opening a methadone clinic.

But a majority of Minot council members were not convinced. That’s when the director of the Kalispell clinic told Stavros about Schmaltz. She agreed to speak at a town meeting. She explained to city residents that it’s people who are addicted to heroin that they should be worried about, not people who are taking methadone to stay in recovery.

After she told her story, Stavros said, the room was silent. The council unanimously approved the clinic.

As of this week, Community Medical Services Minot had 30 patients with a goal of reaching 300 in two years, and plans were underway to start another clinic in Fargo, according to Stavros. And a Bismarck treatment center, the Heartview Foundation, has received the city’s permission to add methadone to its treatment options.