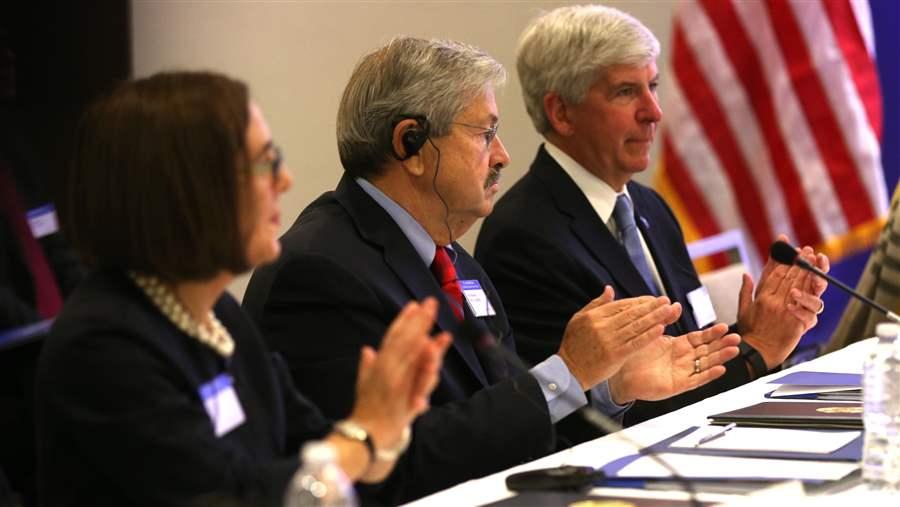 Oregon Gov. Kate Brown, Iowa Gov. Terry Branstad and Michigan Gov. Rick Snyder listen to a presentation by Chinese President Xi Jinping. Snyder has made five trips to China to coax companies to invest and locate facilities in his state.

Charges of “terrible” trade deals, the shipping of jobs overseas and the dangers of globalization dominated the presidential campaign. But many states are aggressively courting foreign companies to boost and diversify their economies.

“People make it too complicated,” said Michigan’s Republican Gov. Rick Snyder, a big proponent of foreign — especially Chinese — investment in his state. “Globalization is clearly a huge trend that’s been going on for some time and is only going to continue. If you want to be a strong economic engine … you have to engage.”

In Snyder’s and other Rust Belt states, U.S. manufacturers left behind willing workforces and abandoned buildings when they departed. In California, foreign tech giants and pharmaceuticals are tapping a supply of skilled workers and access to North American markets.

Many states and regions are looking for foreign investors as a way to boost economic growth. At the same time, there is increasing interest among overseas firms in investing in the relatively stable U.S. economy, said Brad McDearman, a nonresident senior fellow at the Brookings Institution who has extensively studied states and cities that have attracted investment by foreign companies.

With the reduction in domestic manufacturing and other industry because of plant closings and consolidations, as well as U.S. companies moving overseas, he said, “states and regions are recognizing the need to expand their efforts globally.”

International firms invested $353 billion in the U.S. economy in 2015, an all-time high and twice as much as in 2014, according to the Organization for International Investment, which represents the U.S. operations of large foreign corporations.

Those deals included everything from Haier’s acquisition of General Electric Co.’s appliances unit in Detroit for $5.6 billion to auto firm Ningbo Joyson Electronic Corp.’s purchase of Key Safety Systems, a Detroit manufacturer of auto safety devices like seatbelts and airbags, for $920 million.

But McDearman said that while states and cities obviously gain from foreign investment, it’s sometimes hard to track benefits from mergers and acquisitions because the foreign companies are buying existing businesses.

About 80 percent of the investment comes from mergers and acquisitions, he said, and those deals may start with just a few new employees or a few new product lines and grow slowly over time.

A much bigger immediate economic impact comes when a foreign firm builds a brand-new facility in a state or locality, such as Yuhuang Chemical Inc.’s $1.9 billion methanol plant in Louisiana or Vastly’s $2 billion paper products plant in Virginia.

Big, new projects are what all the states are after, he said. “But there aren’t a lot of them out there and that makes it even more competitive.” Most foreign investment is not controversial. But in some instances, many times when China is involved, deals can prompt concerns that they may give foreign businesses and governments access to sensitive technology and threaten U.S. security.

In a report to Congress on 2014 foreign investment, the Committee on Foreign Investment in the United States, a division of the U.S. Treasury Department that monitors foreign deals, concluded that “foreign governments are extremely likely to continue to use a range of collection methods to obtain critical U.S. technologies.”

Snyder said those concerns are being mitigated by stiff technology security. “It’s a concern across the board,” he said, not just in foreign investment. Snyder, who made his fortune in the computer and venture capital businesses, said Michigan has been “emphasizing cybersecurity along with international trade and development.”

Two analysts from the Rhodium Group, a consulting firm that helps governments and private investors track global trends and assess investment risks, noted that while some high-profile deals, particularly mergers, had been scotched because of cybersecurity concerns, the overall uptick in rejections of foreign investment by the Treasury Department had been a result of a greater number of investments — not more restrictive government policies. 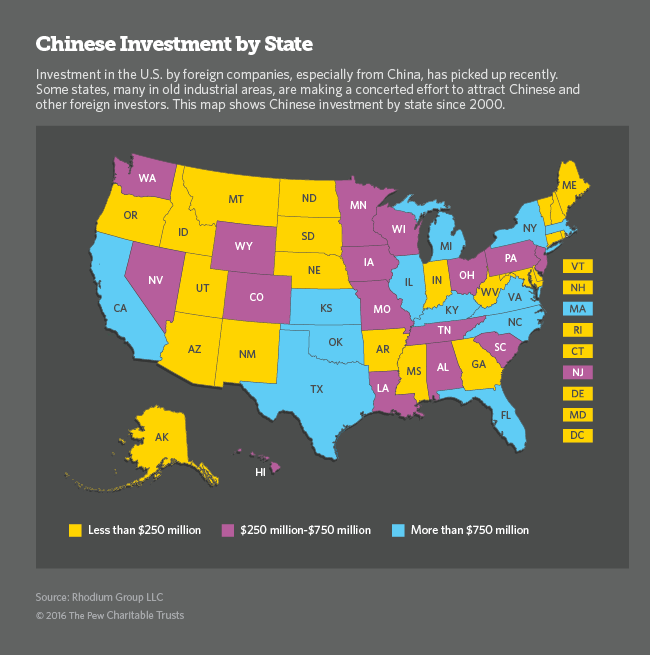 Michigan has made a concerted effort to attract Chinese manufacturing and other industry. Snyder has made five trips to China since becoming governor in 2011. Between January of that year and this November, 23 Chinese companies have invested in Michigan, creating 3,541 jobs and investing $649.5 million in 11 cities, according to Kathy Achtenberg, spokeswoman for the state economic development corporation.

Among the companies is Zhongding USA Cadillac, which announced in August it was expanding its manufacturing facility in Cadillac, Michigan, and creating 125 jobs. The company is getting into the heavy truck and agriculture equipment business.

Karma Automotive LLC, which makes luxury hybrid vehicles, announced in June it will establish an automotive engineering and purchasing hub in Troy to house operations supporting its California-based supply chain activities and automotive production. The project is expected to generate more than $3.6 million and create up to 150 jobs.

During a trip there last year, Snyder signed cooperative agreements aimed at promoting bilateral trade and investment with the Chinese provinces of Guangdong, Sichuan, Hubei and Zhejiang, as well as the city of Chongqing. Those regions have many auto companies and related suppliers, the governor’s office said, making them a natural fit for Michigan.

In May, the Michigan Strategic Fund board, part of the Michigan Economic Development Corp., approved a $5 million grant to help lure Chinese investment in the state, including setting up the Michigan-China Innovation Center in Detroit.

The head of the center, Brian Connors, brags that Michigan is among the top destinations for Chinese companies among the 50 states, which he attributes to the presence of U.S. automobile companies in the state.

“People come from all over the globe for our R and D and purchasing decisions, because we are the headquarters for so many of the suppliers,” he said.

Indianapolis has lost 50,000 manufacturing jobs in the past 25 years, according to Ashley Elrod, the city’s program director for economic development.

“When you hear [political speeches] about Carrier picking up and moving to Mexico … that was a loss just this year in Indianapolis,” she said. Carrier, a heating, ventilation and air conditioning firm, announced in February it was abandoning Indianapolis, eliminating 1,400 jobs.

The city, she said, is mounting a concentrated strategy to bring in foreign firms, which it sees as a way to blunt the impact of the departure of American firms. Many of the foreign firms pay higher wages and invest in training to boost traditional manufacturing workers into positions that require advanced skills, she said.

For example, the Danish firm Grundfos, a maker of water pumps including the Peerless brand, bought a small Indianapolis firm in 2013 as a way to expand its U.S. market. It did so after the local firm’s owners rejected a bid from a domestic company, fearing it would fold the local plant into its overall U.S. operation and move jobs out of the city. Grundfos kept jobs in Indianapolis and is looking to expand its plant, Elrod said.

“This example shows where it can be a good thing and reverse the narrative that foreign investment is bad,” Elrod said.

Columbus, Ohio, has been attracting foreign investment for years, including Japanese automaker Honda, which has a parts and assembly plant that employs 4,200 in the city, and delivery service DHL Express (USA) Inc., a division of the German logistics company Deutsche Post DHL Group that located its U.S. headquarters just outside of Columbus in Westerville.

More recently, according to Jung Kim, director of research and business intelligence for the city’s economic development agency, the city has been trying to help foreign companies like DHL Express with their U.S. operations. The delivery company a few years ago consolidated some U.S. operations and now employs more than 2,200 people in Columbus.

In North Carolina, about 230,500 workers are employed as a result of foreign direct investment, which has amounted to $13.6 billion in the last decade, according to the Economic Development Partnership of North Carolina, a public-private entity.

One argument the agency makes to attract companies to the state is that because the U.S. continues to be a strong market for sales, it’s advantageous to have the manufacturing here too, and avoid large shipping costs as well as long delivery times.

“If you are making product over in China and relying on a couple of months of shipping time, you lose the ability to adapt very quickly to consumer changes,” said Christopher Chung, CEO of the economic development group. In addition, he said, labor costs have risen in China, and while they are not nearly as high as in the U.S., it’s just another factor that Chinese companies may weigh.

San Diego — home to huge U.S. military installations and industry, as well as a large medical and pharmaceutical research industry — was anticipating a downturn in federal funding five years ago and looked to investment from abroad, said Nikia Clarke, executive director of the World Trade Center San Diego.

About 40 percent of the foreign direct investment in the city comes from the U.K. and Japan, she said, and is largely concentrated in the information and communications industry, as well as pharmaceuticals.

Takeda Pharmaceutical Co., a giant Japanese firm that makes a variety of drugs, especially ones to treat diabetes and gastrointestinal diseases, consolidated all of its West Coast drug operation in San Diego.

Electronic components manufacturer Murata Manufacturing Co., another Japanese company, acquired San Diego’s Peregrine Semiconductor Corp., a maker of radio frequency integrated circuits used in cellphones and other communications equipment. They expected to add about a hundred jobs and are using Peregrine as the “spear for their North American expansion strategy,” Clarke said.

Clarke said while domestic companies sometimes merge with San Diego firms and move the manufacturing plants to Texas or Iowa where costs are cheaper, foreign firms tend to keep their operations where they are.

And contrary to some political rhetoric, San Diego’s location on the border with Mexico is an asset, she said.

Foreign companies like Japanese electronics manufacturer Kyocera Corp. locate their headquarters and high-skilled work in the U.S and put the lower-skilled manufacturing efforts right across the border.

“That model works very well here,” Clarke said. “The border economy is such an engine of economic growth and that’s something that’s been left out of the debate.”