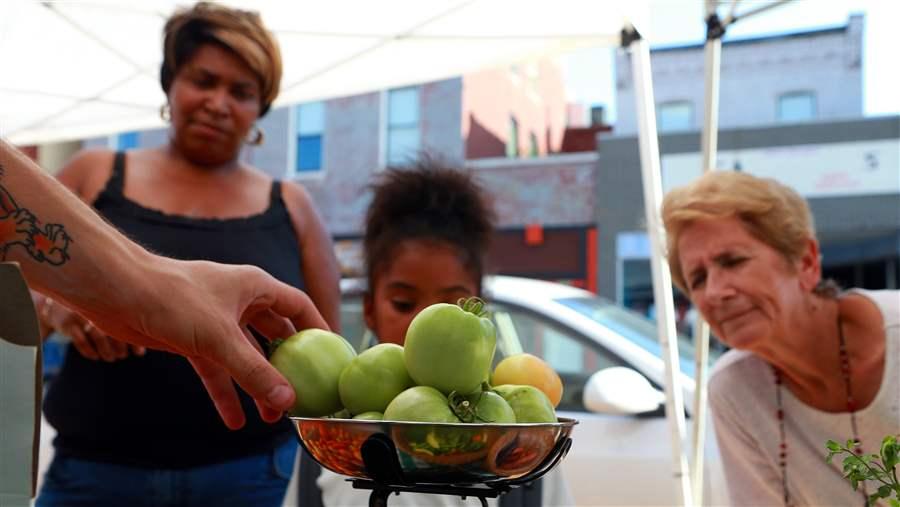 Shoppers buy produce at a farmers market in St. Louis, Missouri. The market is one of 3,500 in the U.S. that accept food stamps.

Six years ago, only a few U.S. cities had food policy directors — strategists tasked with connecting communities with local farm products and improving access to food in underserved neighborhoods. Now, in line with a national push to improve access to healthy foods and support urban agriculture, nearly 20 cities have them.

“The issues with food are at times so big and so global and so complicated. But as a city, we can actually start to get our arms around it,” said Blake Angelo, who became Denver’s first manager of food system development last year.

Hiring local food policy experts marks a departure for the nation’s food system, which has traditionally left food policy up to the federal government and relied on a long supply chain between the people who grow food and those who consume it.

The shift reflects a growing consensus that boosting availability of locally grown food helps people to eat healthier, supports small and midsize farms, and protects the environment by emphasizing sustainable farming practices. And state and local officials are taking steps to ensure that healthy local food is accessible to people of all income levels, not just those who can afford to shop at the growing number of trendy urban farmers markets across the country.

Several states have taken steps in recent years to get produce from local farms into school cafeterias, encourage farmers markets to take food stamps, and create new ways for small and midsize farms to sell their products locally.

This year, Kansas expanded a task force that looks for ways to train farmers and expand access to locally produced food, Louisiana mandated that the state school system develop a farm-to-school program, and the Florida Legislature made it possible for more farmers market vendors to accept food stamps.

Already 3,500 farmers markets in all 50 states accept food stamps. Some also double the food stamp value when they’re used to buy fresh, local produce. States like New Jersey, New York, Tennessee and West Virginia have emphasized the importance of building community gardens in blighted neighborhoods. Over the last 30 years, others have created nearly 300 state and regional food policy councils that bring governments and advocates together to work on food policy issues.

In 2015, Hawaii allocated money for a farm-to-school program and California boosted funding for a program that encourages welfare recipients to buy fruits, nuts and vegetables grown in California.

At a time when the number of farms is declining, the U.S. Department of Agriculture has focused on grants that support local and regional food businesses and a national farm-to-school program.

Nonprofits that specialize in environmental preservation and nutrition have worked for years to boost ties between communities and nearby farms. But advocates such as Brad Leibov, president of the Liberty Prairie Foundation, a Chicago-area nonprofit focused on local food systems and environmental conservation, said state and local officials need to formalize these relationships and programs with public policies that make sustainable land use and local markets a priority.

“By and large, our national policy and often state policy … is designed to support conventional agricultural systems,” Leibov said.

States and cities have taken a variety of approaches to encourage the production and consumption of local food.

“Forever, nonprofits and grassroots activists and farmers and residents have been very involved,” said Holly Freishtat, Baltimore’s food policy director and one of the first people to serve in that role in a U.S. city. But now, she said, driven by a desire to increase urban farming and provide fresh food in neighborhoods that lack grocery stores, local governments are doing more.

In Colorado, local producers have been buoyed by measures like a 2012 state law that allows those who produce items like jams, jellies and honey to run their businesses out of home kitchens.

Angelo, Denver’s food policy director, hopes Colorado will continue to implement statewide policies that encourage local production and consumption. In the meantime, he is writing one for his metropolitan area that will propose ways to improve access to healthy food and to create jobs for people who grow and sell it.

Some states and cities are trying to make urban farming more affordable. In 2015, the Baltimore City Council granted a 90 percent property tax credit to private urban farmers who tend their land for at least five years.

Baltimore also negotiated with a local union in 2014 to let members put $250 of their annual health benefit toward community supported agriculture programs, known as CSAs, which allow them to buy into a local farm at the start of the growing season and receive a weekly supply of produce. In 2013, city regulations were revised to make way for backyard bees, goats and chickens.

And officials are working to increase the amount of land used for agriculture by leasing swaths of farmable city-owned property for $100 a year. Already, there are 17 urban farms and more than 50 greenhouses in the 92 square-mile city.

Access to locally produced food can improve the health of the one in four Baltimore residents who live more than a quarter mile from a grocery store, Freishtat said. In 2015, the Maryland Legislature allowed Baltimore to issue tax credits to grocery stores in neighborhoods that lack places to buy affordable and fresh food.

The Chicago area has a plan to increase access to healthy food. Only 1.5 percent of the food consumed in and around Chicago is grown there, Leibov said.

Farmers in Northeast Illinois are often forced to move away from urban food markets, Leibov said, because farmland has become expensive and is often gobbled up by residential and commercial development. The state could counter this with farmland preservation initiatives, he said.

“It would give some predictability to land use plans and it would send a very strong message not only to the residents, but to consumers, that having an agricultural system that is sort of woven into our fabric of daily life is important if we’re going to have a truly resilient region,” he said.

For others at the forefront of the local food movement, keeping local farms thriving is also about teaching children to eat locally sourced foods.

One way to do that is by supplying school cafeterias. Putting fresh fruits and vegetables in school cafeterias not only offers a healthy alternative to preservative-filled, heat-and-serve school lunches, but teaches healthy eating habits that children will carry for life, said Beth Feehan, who leads a farm-to-school program in New Jersey.

The program, which started as a nonprofit endeavor, is now run by the New Jersey Department of Agriculture and connects school cafeterias with farmers who supply fresh produce.

It’s a matter of developing a child’s palate, “so if they taste a cherry tomato off a vine, they’ll go looking for it for the rest of their lives,” Feehan said.

Farm-to-school programs have been popular with legislatures, but they may not always be worthwhile for farmers, said Ryan Pesch, who studies community food systems at the University of Minnesota.

Small and midsize farms might profit more from selling to larger institutions like hospitals or running a CSA.

In a 2014 study that looked at the farm-to-institution market in Northwest Minnesota, Pesch found that health care facilities were more likely to buy a wider array of food than school systems and buy more of it because they are open year-round.

“The best thing [schools] can do is utilize [produce] on a salad bar, which isn’t their main course,” he said. “Unless you’re doing things from scratch, it just doesn’t work so well.”

But selling to the institutions can be difficult for small and midsize farms because that market is dominated by large food companies, said Rebecca Dunning, a sociologist and agricultural economist who works to connect farmers to grocery stores, military bases and hospitals in North Carolina.

Many parts of the country are oversaturated with farmers markets, she said, so it can be hard to turn a profit there. Connecting with a grocery chain can spread a farmer’s economic risk and increase profits, she said.

“If you can connect more directly to the food service or grocery markets within the state, then you’d be able to keep the product in the state,” she said. “[You] could conceivably establish a relationship where a grocery store asks for special things.”