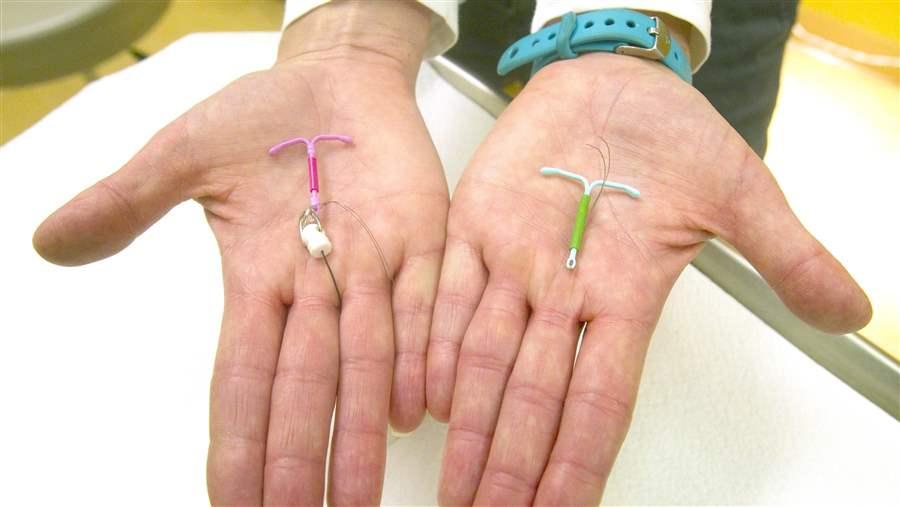 At least 17 states are making it easier for women on Medicaid to get small, effective intrauterine birth control devices like these inserted immediately after giving birth.

During her residency in obstetrics and gynecology at the University of Pittsburgh Medical Center in 2012, Michelle Moniz treated an expectant mother in her early 20s who wanted an intrauterine birth control device surgically inserted immediately after her delivery.

But because the state Medicaid agency didn’t use a separate billing code for the device, commonly known as an IUD, the hospital couldn’t accommodate the woman’s wishes. She would have to wait until her six-week, post-partum checkup to have the procedure to prevent unwanted pregnancies.

The woman didn’t show for that appointment. But it was not the last time Moniz saw her. A few months later the woman showed up pregnant again — and not by design.

Moniz, now a clinician and birth control researcher at the University of Michigan Medical School, said she and colleagues have seen many similar instances in which poor pregnant women on Medicaid wanted long-lasting contraception — IUDs or other birth control implants — immediately after delivery, only to be turned away because Medicaid billing procedures didn’t accommodate them.

But that is changing. At least 17 states have changed procedures so their Medicaid health care programs for the poor will pay hospitals to insert the implants at the most opportune moment — when women are already at the hospital having a baby. That often is the only opportunity that many of them have for a face-to-face discussion with doctors about the best methods of birth control. It’s also the occasion to do something about it.

The changes in billing procedures, maternal health care advocates say, give women on Medicaid better access to the most effective and most expensive forms of contraception. They are happening at a time the nation’s rate of unintended pregnancy remains stubbornly high, at about 45 percent of all pregnancies. And rates are higher among women at lower income levels.

“There is so much enthusiasm about this because these methods are so incredibly effective, and they should be one of the options that all women have,” Moniz said.

Despite the enthusiasm, Moniz, other maternal health care advocates and the federal Centers for Medicare and Medicaid Services, which endorsed the changes, urge caution, too. They say it is important that poor, vulnerable and minority women not be coerced into getting the implants, as many have been in the past in state-sanctioned sterilization or public health birth control programs.

More Effective Than the Pill

Long-acting reversible contraceptives, or LARCs, are the most effective form of birth control that women can use. They provide contraception for three to 12 years. There’s the IUD, which is a small plastic device inserted into the uterus that prevents sperm from fertilizing an egg. The other is a birth control implant, which is a tiny plastic rod inserted in the upper arm that releases hormones that also stop sperm from reaching eggs. (Some IUDs also now have a hormonal component.)

LARCs result in less than one pregnancy per 100 women in a year compared to nine pregnancies in a year for the birth control pill, 12 for the diaphragm and 18 for condoms. Women don’t have to remember to take them daily as they do pills or risk inserting them incorrectly before sex like diaphragms.

Despite their effectiveness, women do not use LARCs as much as some other birth control methods. For instance, nearly 26 percent of women using contraception rely on the pill and 15 percent use condoms while fewer than 12 percent have LARCs, according to the Centers for Disease Control and Prevention.

And they have been harder for women to get until recently. Traditionally all state Medicaid agencies and most commercial health plans have bundled all costs associated with labor and delivery into a single reimbursement that covered all birth-related services, including the cost of LARCs and the procedures for inserting them.

But the Medicaid bundled payment didn’t come close to covering the cost, said Eve Espey, an Albuquerque, New Mexico, OB-GYN and chair of the American College of Obstetricians and Gynecologists’ LARC working group.

IUD and implants range from $400 to $1,000, and the cost of inserting them can add several hundred dollars. That was often more than the payment. As a result, hospitals had refused to insert them immediately after delivery. (The bundled Medicaid reimbursement for labor and delivery for a vaginal birth was $9,131, a 2013 analysis found.)

Consequently, new mothers who wanted LARCs were forced to wait until their first post-partum appointments with their doctors.

But like Dr. Moniz’s patient, nearly 40 percent of women in Medicaid who have had uncomplicated deliveries do not receive post-partum care, resulting in lost opportunities for obtaining LARCs.

Even when they did have the check-ups, maternal health groups say, women find that their obstetricians and gynecologists did not insert LARCs because of the high cost of stocking the devices.

A Shift in South Carolina

South Carolina was the first state, starting in 2012, to make changes in Medicaid payments to encourage the immediate insertion of LARCs after delivery for women who wanted them.

The changes were prompted by doctors who told state health officials that more than half the women on Medicaid weren’t showing up for their appointments six weeks after birth, when women usually start using contraception, said Melanie Giese, the Medicaid director of the South Carolina Birth Outcomes Initiative.

The results of the change were quickly evident. The use of LARCs rose steadily, from 10.5 percent of women on Medicaid in 2013 to 14.2 percent in 2015, according to the South Carolina Department of Health and Human Services. The department estimates the policy change has saved South Carolina’s Medicaid agency $1.7 million by preventing unintended births.

Other states paid attention. So did the federal government, which splits Medicaid costs with the states. The federal Centers for Medicare and Medicaid Services endorsed the billing changes in a bulletin to all state Medicaid agencies in April. A survey of state Medicaid agencies published in September by the Kaiser Family Foundation found that 17 states, including California, Georgia, Illinois and New York, have unbundled LARC Medicaid reimbursements to allow for more insertions following deliveries.

Giese, Espey and other maternal health care specialists cautioned that the Medicaid policy changes alone won’t automatically increase the use of LARCs. Hospitals have to make sure their billing departments understand how the changes work, they said, and that cannot be taken for granted. Although New Mexico made the changes, Espey said, only one hospital in the state has implemented it.

They said it’s also important that doctors and midwives be trained in IUD insertions. The uterus stretches during delivery, which makes the procedure a bit different than it would be six weeks later.

There appears to be no organized opposition to the changes. But some groups are watching how providers discuss LARCs to make certain poor women aren’t being coerced into using them.

“In the past, low-income women and particularly black women have been targeted for what turned out to be reproductive health abuse,” said Marcela Howell, founder of In Our Own Voice, an organization focused on reproductive rights for black women.

The 20th century saw numerous examples of state-sanctioned pressure on poor, minority or vulnerable women to have fewer children, from forced sterilizations in the early part of the century to proposals to entice women on welfare to have contraceptive implants in the 1990s. Even now, some states, such as Florida, Massachusetts and New Jersey, deny additional welfare benefits or reduce help to families that have additional children while on public assistance.

To help prevent undue pressure, maternal health advocates and the Centers for Medicare and Medicaid Services insist on states and doctors presenting the full range of birth control options to women without promoting one over another.

“It’s important to make sure a woman has access to [LARC] methods, but just as important that women have access to information about all birth control methods,” said Moniz, the University of Michigan researcher.