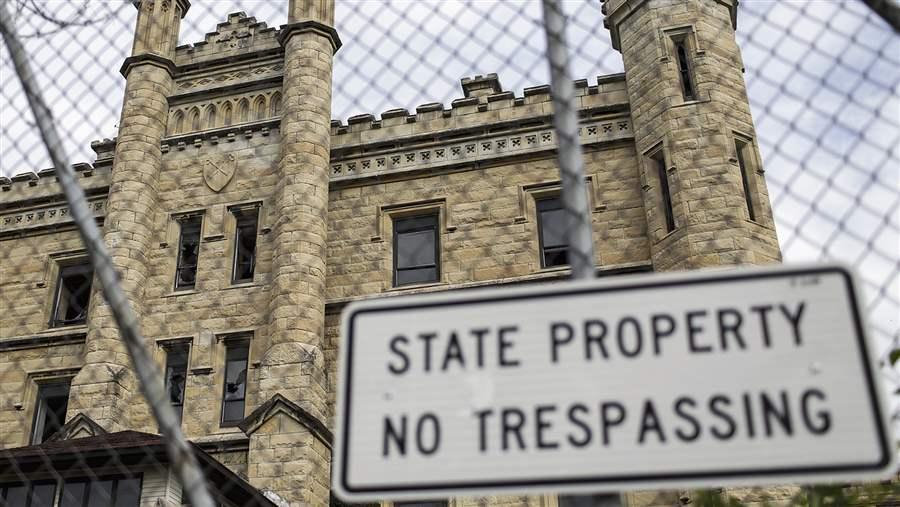 The Joliet Correctional Center has been falling into disrepair since 2002, when Illinois shut it down. While many state prisons that were shut down after the Great Recession remain vacant, states are increasingly finding new ways to reuse the properties.

GAINESVILLE, Fla. — The cinder block buildings that dominate this campus have been painted bright pink, orange and blue. The razor wire that used to sit atop the chain link fence has been cut down. New trees have been planted, and stark warning signs such as “No one may pass this point” have been scrubbed from concrete walls.

For two decades, this was the Gainesville Correctional Institute, a medium-security state prison where the guards’ main goal was to keep prisoners in. Now it’s Grace Marketplace, a nonprofit campus for the homeless, where social service workers are helping residents find a way out. About 115 people live on the property, tucked away in an industrial area of this college town, receiving free meals, work training, and connections to government services, transportation and jobs.

About 150 state prisons like this one closed after the Great Recession, the result of declining prison populations and consolidations meant to save on operating costs. Many of the properties have sat vacant for years, costing money to maintain, inviting vagrants, and reminding locals of jobs that have disappeared. But across the country, the properties are increasingly taking on new life.

In some instances, states are selling, transferring or leasing the properties to businesses or nonprofits.

A nonprofit in Manhattan will soon convert a closed women’s prison into an office building for organizations that serve women. In California and Colorado, entrepreneurs are eyeing the secure walls of two closed prisons as a perfect place to grow medical marijuana.

Travelers in Boston can hunker down for the night in an old jail that is now a luxury hotel. And in four states — Missouri, Ohio, Pennsylvania and West Virginia — local nonprofits or tourism groups offer tours at old state penitentiaries, whose dark halls become haunted attractions in the fall.

In other cases, states are holding on to the properties and finding new purposes for them — often related to public safety or criminal justice. In Kentucky, a former state prison in Frankfort has since April served as a training academy for state troopers. In New Jersey, a closed prison is expected by next year to reopen as a drug treatment center for inmates. And two juvenile prisons in Illinois are set to reopen in about six months as re-entry and life skills centers for adult inmates about to be released.

Prisons can be a hard sell. Many are in small towns or rural areas, where it can be difficult to attract businesses and local governments may have less interest in purchasing new property. The prisons often have unusual features, such as artillery ranges and commercial kitchens, which potential buyers may not need.

In the towns where prisons have been shuttered, jobs have been lost and revenue from taxes and fees has declined. The high cost of maintaining and securing the properties adds to the urgency to unload the empty facilities.

State officials such as Alexis Offen, vice president of real estate with Empire State Development, the economic development arm of the state of New York, know it’s important to get the sites up and running again. The state’s prison population fell from about 63,800 in 2007 to about 52,200 this year, and the state has closed 13 prisons since 2011.

“While the state has saved hundreds of millions of dollars closing prisons, I think we recognize the impact that a prison closure has on a local community, especially in more rural communities,” Offen said. “And that’s why we have worked so closely with folks on the ground […] to produce reuse plans.”

In some cases, state prisons have been closed because they were outdated or run down. In New York and North Carolina, for example, labor camps, which had been popular decades ago, are going out of use.

The two states also saw their prison populations decline as, similar to many other states, they changed how criminals were sentenced.

Noran Sanford, founder of a new nonprofit called Growing Change is converting an empty prison in the rural town of Wagram, North Carolina, into a sustainable farm and education center to be used for programs for troubled teens. Under his plan, the campus will be open to the community in other ways, as well. Veterans will live in old staff housing, and the guard tower will be a rock climbing wall.

Sanford hopes his model can be replicated across the country, and he is working on a toolkit for local governments that want to use vacant prisons. “I’m asking us to look larger than criminal justice,” he said, “to utilize closed prisons to advance social goals.”

In Gainesville, the city faced criticism in 2004 for its treatment of the homeless, mainly because of laws that restricted where homeless people could sleep and how many meals soup kitchens could serve each day. So the county and city came up with a plan to turn things around, including a new shelter for single men and women that would include access to social services.

An early plan to build a complex at the northern edge of downtown was expensive, and it faced neighborhood opposition. But when the prison closed in 2012, officials realized it had everything they were looking for — housing, a large place to serve food, and plenty of room to grow. The next year, the city bought the prison from the state for about $1.4 million.

Jon DeCarmine, operations director for the Alachua County Coalition for the Homeless and Hungry, which runs Grace Marketplace, said the group did all it could to mask the harshness of the property.

Volunteers helped turn a room that had been used for drug testing into a place where residents can lock away their belongings. The old inmate barber shop is now a county social services office. The old visitation building is now a welcome center equipped with computers.

But social service workers still peer out over dorms from inside glass-enclosed stations where guards once sat. The doors of each building and room still lock each time they close, so DeCarmine carries a ring with more than a dozen keys, like a warden might.

The place is still a bit eerie for Rickey Bradley, who had been a prisoner there in 2008. He moved into Grace in July after being released from another prison. As an inmate, he helped the medical staff. At Grace he helps out in the kitchen, which offers a culinary training program.

And he is thankful to have a place to stay, he said. “They support me.”

Since Grace opened two years ago, it has moved about 200 people into temporary or permanent housing, the vast majority of whom are still housed. Chronic homelessness in the city fell by half in that time. Gainesville Mayor Lauren Poe attributes much of the progress to Grace.

“It’s undeniable that our community is better off,” Poe said.

State officials say announcements that a vacant prison will be put to new use are often welcomed by local residents.

The juvenile prison in Murphysboro, Illinois, was one of the town’s largest employers, said Republican state Rep. Terri Bryant. Its closing in 2012 devastated the economy, she said.

But the planned re-entry center, which would provide job training and life skills like basic finance to prisoners, would bring back jobs and advance the state’s goal of reducing recidivism, Bryant said.

A similar plan is taking hold in the Bronx, where New York state recently sold a closed prison to a nonprofit that wants to use it to help inmates return to life outside prison.

But some projects in former New York state prisons are taking longer than expected to get off the ground.

A plan to turn an old prison site in Schoharie County into a center where old cars are recycled failed after local opposition. Another prison in Madison County was set to open in 2015 as a summer camp for science and technology, and then as a yoga studio, but nothing has yet opened on the site. And a production company has said it wants to create a movie studio at the site of a closed prison on Staten Island, but a deal with the state hasn’t closed.

“We are having a lot of success but some of these locations are challenging because they’re really unique sites in rural areas,” said Offen of the state development office, which is trying to sell five state prisons. “The goal is to find the best plans that both promote reuse and mitigate the economic impact of a closure.”

Other efforts have been successful — sometimes because local governments have stepped in.

In Moundsville, West Virginia, a state prison that closed 21 years ago has become an unexpected source of revenue. The Moundsville Economic Development Council leases the prison from the state, drawing people from across the region to tour the 150-year-old building or to be spooked by a haunted house that is set up inside around Halloween. A building on the property, in the middle of the small city, is a popular venue for public and private events, such as weddings and holiday festivals.

Suzanne Park, executive director of the council, said it took nearly two decades for the group’s plan to become profitable. “It wasn’t an option to leave it sitting abandoned.”