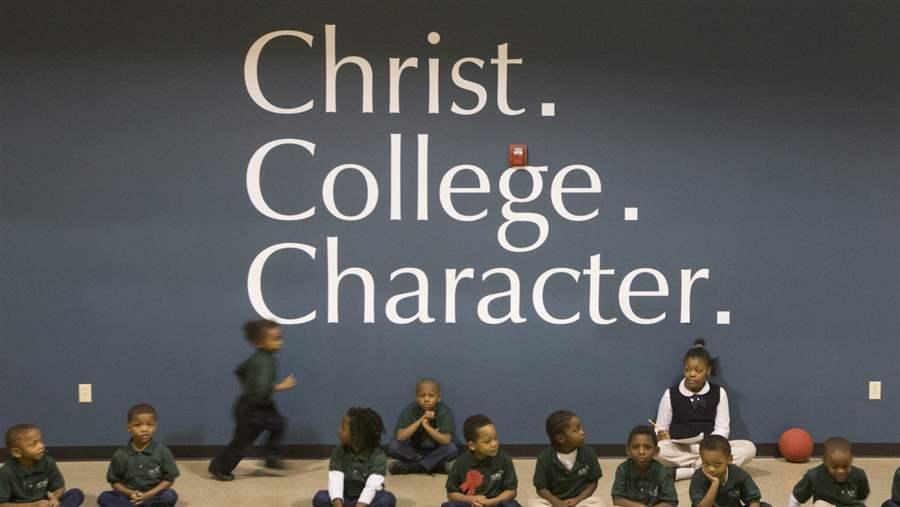 Many parents receive vouchers to send their kids to religious private schools, but those programs and others with ties to religious entities could be in jeopardy as the Supreme Court reviews a playground dispute between a church and Missouri.

Do state laws that prevent taxpayer dollars from aiding churches automatically exclude religious institutions from all state programs — even if it’s one to resurface a playground at a day care center?

In answering that question, the U.S. Supreme Court could put states in the position of spending public money for services provided by churches or other religious organizations despite their own constitutional bans on the practice. Or, many states fear, it could jeopardize a multitude of programs, in which state and local governments provide tax dollars to religious groups via school vouchers or through payments for social services.

“If money goes to religion in some capacity, when is that OK and when is it not OK? This is a sort of ‘Where’s the line?’ case,” said Lisa Soronen with the State and Local Legal Center, which represents organizations like the National Conference of State Legislatures (NCSL) and the National Governors Association.

For states, that can be a complex question, as many fund public services, such as foster care or shelters for abused women or the homeless, which are often run by churches or religious organizations.

The case that justices will decide is Trinity Lutheran Church of Columbia Inc. v. Pauley, which pits a church seeking to secure a state grant to resurface its playground against the Missouri Department of Natural Resources.

Missouri denied the grant, pointing to a provision in its state constitution that bars spending public money on religious institutions, a position that was largely upheld by lower courts. More than 30 other states have similar so-called Blaine Amendments as part of their constitutions.

“By categorically excluding churches from eligibility, the government avoids the problem of funding Catholics but not Lutherans, or Methodists but not Muslims,” the state wrote in a brief submitted to the Supreme Court.

Trinity Lutheran Church argues that it should not be denied the funds because the playground surface has nothing to do with the church’s religious mission, but the state argues taxpayers should not be forced to fund groups they may not support.

Dan Schweitzer with the National Association of Attorneys General said the case contrasts two important parts of the First Amendment, and asks the court to find a balance between prohibiting government from establishing religion and protecting the free exercise of faith.

Much of the arguments from those involved in the case ask the court to revisit a 2004 case that pitted Washington state against a student using a state scholarship to study to be a minister.

Citing its Blaine Amendment, the state asked Joshua Davey to drop his second major or forfeit the scholarship. The state’s actions were ultimately upheld by the court in that case, Locke v. Davey, giving states power to enforce their Blaine Amendments.

Soronen said the two cases fall on opposite ends of the range of cases dealing with the separation of church and state, which can be problematic for states with programs that fall somewhere in the middle.

“The Locke case was so specific to religion. There’s nothing more religious than becoming a minster. There’s no more direct impact to religion and state spending than giving state funds to someone so they can become a minister,” she said. “This case is on the other end of the spectrum. It might be preschool but it’s serving the broader community, not just Lutherans, and there’s probably no religious indoctrination happening on the playground.”

Nineteen states have signed on to friend-of-the-court briefs to weigh in on the case, but none are siding with Missouri. “None of the states are defending their Blaine Amendments,” Soronen said.

She said that’s because those states are worried about what an adverse ruling could mean for a number of programs they help finance or rely on — including school vouchers, child care and recruiting or counseling foster parents — despite their own Blaine Amendments.

Colorado submitted its friend-of-the-court brief because its state Board of Education is in the midst of its own legal battle with a group that challenged a school voucher program based on the state’s Blaine Amendment. The Colorado Supreme Court struck down the voucher program that used taxpayer money to send children to private schools because it conflicted with that state’s “broad, unequivocal language forbidding the state from using public money to fund religious schools.”

Colorado has filed an appeal to the U.S. Supreme Court. Its petition is pending.

In a brief signed by 18 other states, Nevada Attorney General Adam Paul Laxalt, a Republican, wrote that Missouri unfairly discriminates against the church, something he said could affect other state programs where religious groups have an interest.

“If Missouri is right, its local fire department couldn’t respond to a three-alarm fire at a church because it would somehow be ‘supporting’ religion,” Laxalt wrote in a statement when the brief was filed.

He said justices need to limit the extent to which governments can exclude religious organizations from generally available programs — in this case, one that deals with children’s safety.

“The result is that Missouri in effect refuses to protect children equally from injury because they play at a church,” Laxalt wrote in his brief. “The tykes atop the reincarnated tire will use it to run and romp, not sermonize and solicit.”

The court’s opinion could affect other state programs with ties to religion.

According to NCSL, 17 states have voucher programs that allow state money to be spent at private schools. But only one of them, Maine, has an exception barring the money from being used at schools with a religious affiliation.

The Association of Christian Schools International, a nonprofit organization for Protestant schools, argues in a brief that private religious schools already receive state grants that ensure that their students get access to health and educational services, affordable transportation and textbooks.

The group warned that if the high court were to side with Missouri, “religious institutions could be excluded not only from these programs, but also from receiving basic public support.”

Groups that advocate for the separation of church and state have their own concerns.

“Here the church is asking the Supreme Court to force the state to fund the property of a church,” said Alex Luchenitser, associate legal director at the nonprofit Americans United for Separation of Church and State. “Historically one of the key purposes of traditional restrictions on state funding of religion was so that taxpayers wouldn’t have to fund church facilities.”

He said if the court rules in favor of the church, the number of state social services contracted with churches might expand and include programs that require religious participation from those receiving services.

“Many religious groups provide social services,” he said. “Some are very good programs that don’t involve injection of religion into programming, but some tie proselytization into delivering services.

“Depending on how broad the ruling is, the result could be that it’s easier for states, or states would be required to include groups that proselytize to recipients of services.”