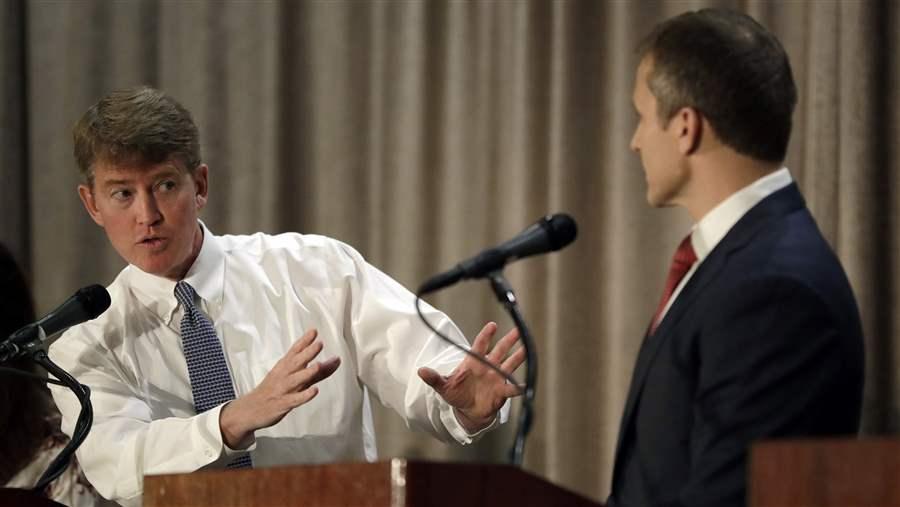 Missouri Democratic gubernatorial candidate Chris Koster, left, speaks to Republican candidate Eric Greitens during their first debate. A second debate was rejected over a dispute about tax returns and financial disclosure, an issue in many states.

In this election, the controversies are over tax returns, the source of personal wealth and who’s funding campaigns. No, it’s not the presidential race — it’s the contest for governor of Missouri.

Missouri Democratic candidate Chris Koster called off debate negotiations with Republican candidate Eric Greitens on the grounds that Greitens wouldn’t release his tax returns for the years 2012 through 2015. Greitens counters that no gubernatorial candidate in the state has ever released tax returns and that he and his wife, Sheena, made the decision not to unveil them.

“Eric has also filled all the personal financial disclosure forms necessary to show that there are no conflicts of interest,” said Will Scharf, policy director for Greitens. Koster has filed the same forms, a spokesman said.

As in about a third of the states, Missouri’s financial disclosure forms for both candidates and officeholders are not available online, making it impossible for the public to see them without traveling to Jefferson City. And the financial disclosure forms in Missouri, again like many states, only require vague listings of sources of income over $1,000, not exact amounts.

In most states, the personal financial records of candidates for state office and elected officials, such as governors and legislators, are hidden behind arcane disclosure rules and labyrinthine accessibility — if they are available at all. Disclosure of tax returns is not required, though tradition in many states dictates that most candidates release them.

The disparate and antiquated rules make it more difficult to track conflicts of interest between a candidate or officeholder’s personal financial interests — or those of his or her donors — and the politician’s policy positions or actions in office. Various reforms aimed at increasing transparency have been attempted in states through the years, with mixed success.

At a time much of the public is suspicious of government and money roils the political system, greater financial transparency would engender a greater trust in politicians and their actions, said John Wihbey, an assistant professor at Northeastern University who with a colleague is studying financial disclosure in the states.

Greater disclosure, he said, would help dispel suspicions that there are “dark corners and unturned stones where power and money are playing a role, hidden from public view.” 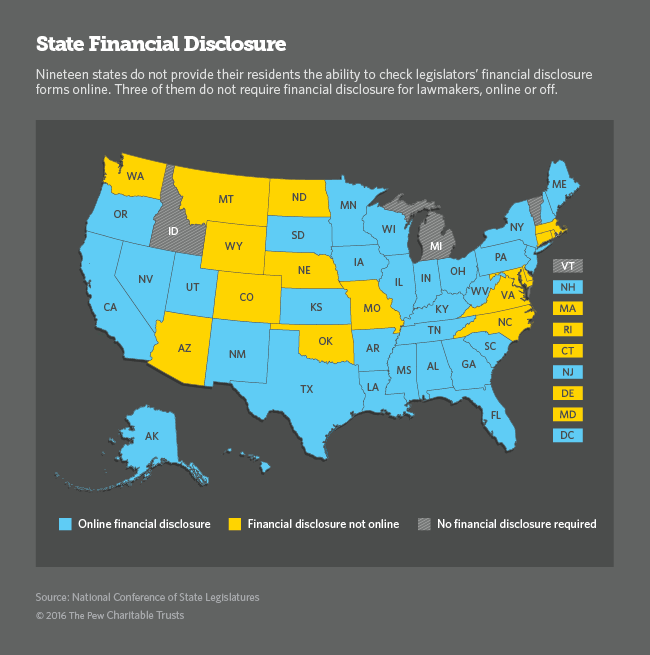 Three states — Idaho, Michigan and Vermont — don’t require any personal financial disclosure from state elected officials. And even when state laws require the filing of personal financial records by public officials, getting to those records often requires perseverance and travel.

Some states will only allow access to the records if someone shows up in person to request them. Other states insist on verifying the names and addresses of all those who request politicians’ records. Other records are handwritten, making them hard to read.

Most of the focus in recent years has been on contributions to campaigns, and state databases do exist for campaign donations, though some are more comprehensive than others. And contributors to nonprofits that can influence election campaigns can remain anonymous under U.S. Supreme Court rulings.

But personal financial disclosure has taken a back seat. As a result, transparency is seriously out of date, according to Wihbey and Northeastern professor Mike Beaudet, his partner in the 50-state study of disclosure rules. They are finding what they call a “litany of inadequacies.”

Wihbey said most state-level financial disclosure is operating under rules and procedures that predate the internet. “I think the web has accelerated our expectations about access to information,” he said. But states have not kept up in meeting those expectations.

In an article that ran this month as their research was ongoing, Wihbey and Beaudet wrote that there is “wild variation” in state financial disclosure standards.

“Some forms don’t require real estate holdings and gifts,” they wrote. “Most bury relevant information in appendices.” In Wyoming, the professors noted, public officials merely have to check a box if they have “any security or interest earnings” and “real estate, leases, royalties.” But, they wrote, “nothing more.”

The Center for Public Integrity, a nonprofit that does investigative reporting on money in politics, has launched a 50-state study of financial disclosure rules. Its researchers also have found the going difficult.

“Some states still have handwritten [forms],” said Kytja Weir, manager of the project. “That tells you about the level of advancement that there’s been. And some of them ask pretty generic questions about investments, or they don’t even ask about investments.

“There are some that make you go in person to get them, like Maryland, which is kind of amazing in this day and age.”

Maryland ethics law requires any person who wants to see the financial disclosure forms to show up in Annapolis, show ID, and register their home address as well as whose information they accessed. Officeholders have the right to see who accessed their information, though they cannot block it.

“Copies are 20 cents a page,” said Michael Lord, executive director of the Maryland State Ethics Commission. However, if someone wants to bring an external drive, the forms can be downloaded for free onto the electronic device, he said.

In 2012, Democratic state Sen. Jamie Raskin introduced legislation to, among other things, allow online access to the ethics records. But that part of the bill didn’t pass. Interestingly, if someone files a Freedom of Information Act request for the records, they can get them, but still not online, Lord said, because ethics laws trump freedom of information laws.

The biggest stumbling block to changing financial disclosure laws appears to be the people they are supposed to track — state lawmakers.

Take Vermont, one of the states with no disclosure laws. Generally known as a progressive place, lawmakers came up with all kinds of excuses to avoid passing a financial disclosure law this year, said state Sen. Anthony Pollina, a member of both the Progressive and the Democratic parties.

Pollina sponsored measures that would have required disclosure of the personal finances of lawmakers, some other state officials and candidates, and established an ethics commission to monitor compliance.

One argument against disclosure Pollina said he heard was “everybody knows everybody” in a state like Vermont, with a population of 626,000. Hence it shouldn’t be necessary. It’s an argument he rejects.

Pollina said another argument he heard was: “It’s tough enough to get good people to run for public office and this would be a deterrent.” He didn’t buy that either.

The Vermont Senate approved his disclosure bill, but it was never taken up in the House. Pollina said he intends to try again next year.

“We have an easy time passing laws that regulate other people,” he said, “but it seems to be very difficult to get our Legislature to pass laws to regulate itself.”

Similarly in Michigan, another state without a financial disclosure records requirement, legislation seems destined for the dustbin.

“My sense is it’s not moving out of the Senate this year,” said Michael Reitz, head of the Mackinac Center for Public Policy, a conservative think tank. Reitz points out that the legislation, known as the Legislative Open Records Act, passed the House but does not seem to have more momentum.

Five states have financial disclosure referendums on the ballot next month, including Missouri. Most have more to do with campaign financing than disclosure of officeholders’ finances.

The Missouri initiative would amend the state constitution to put limits on campaign contributions to political parties or committees to elect state candidates. It also would prohibit concealment of the source of the contributions, thereby shedding light on who’s financing a candidate’s campaign.

A Rhode Island initiative would establish an ethics commission that would subject all elected and appointed state employees to scrutiny over conflicts of interest, as well as force more personal financial disclosure.

A Washington state initiative calls for public financing of campaigns, funded by a nonresident sales tax.

And a California referendum calls for U.S. Senate and House members from the state to work to overturn Citizens United, the U.S. Supreme Court ruling that has allowed corporations and labor unions to spend unlimited amounts on political advertising.