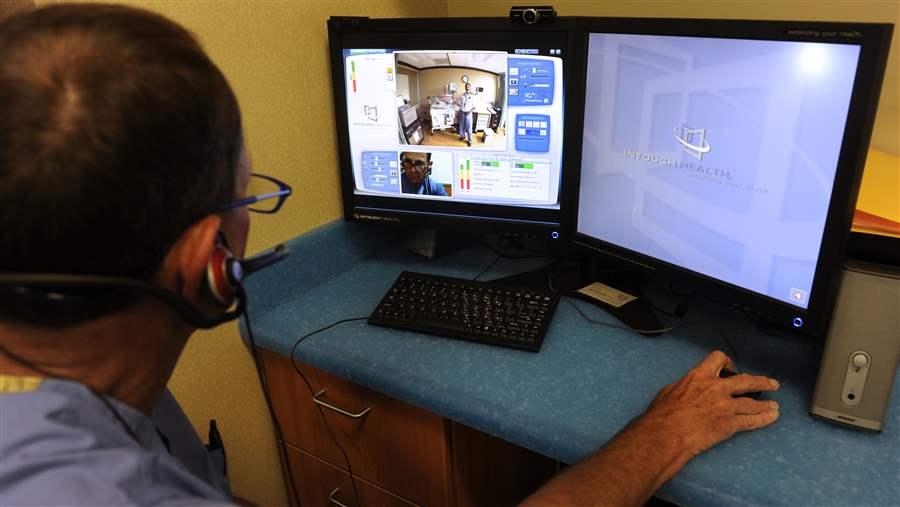 A neonatologist uses video equipment to consult with a doctor in rural Colorado. Amid a shortage of mental health providers, states are increasingly turning to telemedicine to meet the urgent need for drug addiction treatment and other behavioral health counseling.

An acute need for more and easier access to mental health treatment and improvements in communications technology have set off a boom in remote therapy, but strict licensing rules and varying state laws are hampering its growth.

Like telehealth in general, using videoconferencing, smartphones and other technology to treat mental illness has long been recognized as an invaluable tool for getting care to people in rural areas, where shortages of psychiatrists, psychologists and other providers are even more acute than in the rest of the nation.

Now, telemental therapy — also called virtual therapy, telepsychiatry or telebehavioral health — is more widely available outside of rural areas and is seen as a way to address two crises that aggravate each other.

First is a growing mental health crisis, made worse by the opioid epidemic and the urgent need for drug addiction treatment programs and counselors. Secondly, the U.S. is suffering a shortage of mental health providers, so people who do seek treatment can wait weeks or months for an office visit or be unable to find suitable, affordable care at all.

The result: About one in five American adults experience mental health problems each year but less than half of them receive treatment.

Telemental health services, using secure video hookups and high-definition cameras, make it possible for patients to get help without seeing a therapist in person. And the technology allows providers in areas with lower demand to treat patients in areas with higher demand.

“We tend to think about rural areas” when discussing telemental health care, said René Quashie, a health care and life sciences attorney with Washington law firm Epstein Becker & Green. “But we have trouble in metropolitan areas and the suburbs, too, and virtual care is a way to bring expertise to underserved areas and populations.

“I see nothing but growth in this area,” Quashie said. “We are light-years ahead of where we were just five years ago.”

Medicare and Medicaid, the federal health programs for the elderly and the poor, reimburse providers for many telemental health services, and they have been a driving force in that growth. The programs account for more than a third of national spending on health care and their decisions have tremendous influence on health policy and the health care industry.

Many state governments are turning to teletherapy to reach more people and to cut treatment costs.

South Carolina was a pacesetter, launching teletherapy efforts in 2007 to address one of the most nagging problems caused by the shortage of mental health treatment: The enormous strains placed on hospital emergency rooms by people with behavioral health issues who are unable to find help elsewhere. They often end up stuck in ERs for hours or even days.

With the help of nearly $8 million from the nonprofit Duke Endowment, largely to purchase equipment, South Carolina created a telepsychiatry network staffed by psychiatrists from within the state to serve ERs in hospitals that had few mental health providers and facilities.

The South Carolina Department of Mental Health now has telepsychiatry units in 24 ERs across the state that can connect with network providers 16 hours a day, seven days a week. The network treats an average of 400 patients a month, said Ed Spencer, the head of the state’s telepsychiatry program. As of October, the network had treated more than 30,000 patients.

Costly wait times for patients to be assessed and treated, which could be two to three days on weekends, have been reduced to an average of less than eight and a half hours, Spencer said. And the network is seen as a model approach for improving and lowering the cost of treating mentally ill patients in ERs.

And the Duke Endowment helped North Carolina, a far larger state, set up a similar pilot program in 2010. In 2013 the state decided to expand the program statewide through 2017.

The National Business Group on Health, a Washington nonprofit that represents large businesses on health policy issues, found in its annual survey that teletherapy was being offered by 34 percent of large employers. And in its most recent survey, BenefitsPro, a benefits industry newsletter, found that half of businesses of all sizes want to offer telebehavioral health services.

But practitioners, mental health experts, companies trying to build telemedicine and telemental health networks, and companies who want to offer teletherapy say their efforts are being slowed by state laws that can make it difficult to practice teletherapy across state lines.

The biggest barrier, perhaps, is licensing. States generally require that doctors be licensed in the same state as the patient they are treating. That could mean a mental health care provider would have to have multiple licenses to treat patients across state lines.

“It is a substantial financial and operational burden on telemedicine practices that provide services in multiple states,” said Dr. Talbot McCormick, CEO of Eagle Hospital Physicians, an Atlanta company that offers telehealth and telemental health services to hospitals.

To make sure Eagle has enough providers who can legally treat patients, the company has full-time staff focused just on licensing and related paperwork, and often pays for providers’ licensing costs to encourage their participation.

Some states work out license reciprocity arrangements, especially with neighboring states. New Jersey, which generally lags behind most of the rest of the country in updating its laws to address telemedicine, passed a law in 2014 that allows for reciprocity as long as the other state license is in line with New Jersey’s license requirements.

State compacts that make one license acceptable among all the member states are another solution backed by telehealth providers. Some critics, however, argue that the compacts give too much power to medical and other professional boards, which can make regulations more restrictive, not less.

Seventeen states have signed on to such a compact covering doctors, including psychiatrists. But compacts covering other types of mental health practitioners such as psychologists, family therapists and therapeutic social workers are still being drawn up.

State laws on how private insurance should pay telemental health providers — if at all, because some insurers still don’t recognize telemental health treatment — also vary widely. Providers have been pushing for reimbursement parity laws that ensure payment at or near what they would receive for in-person visits.

Thirty-two states and Washington, D.C., have parity laws in place now or have enacted ones that will take effect next year. Twenty-three of those and the District of Columbia require that payments to teletherapy providers be equal to what they receive for in-office treatment, according to the National Conference of State Legislatures. The remaining nine allow for somewhat lower payments that account for savings through reduced overhead and other factors.

Providers generally have pushed hard for parity laws, arguing that the promise of telehealth will never be delivered on if doctors and others are not sufficiently reimbursed. Others, however, say parity laws will blunt one of the chief benefits derived from telehealth, cutting costs.

Well beyond licensing and reimbursement, many state rules on telemental health also vary.

Some states have made aggressive efforts to update laws governing mental health and to spell out complete rules. Others have very loose standards, if any. New Jersey, for example, has no comprehensive law on telehealth, although a proposal is moving through the New Jersey Legislature.

Each state even has its own definition of telemental health, says Quashie and fellow Epstein Becker & Green attorney Amy Lerman, who together conducted a 50-state survey of state laws and regulations governing teletherapy.

Lerman pointed to Massachusetts, a state that through its licensing boards has very detailed rules governing teletherapy for each of the different types of providers, including psychiatrists, psychologists and social workers. Michigan, on the other hand, has no teletherapy rules specific to each class of provider.

Twenty-nine states have rules requiring informed consent of teletherapy patients, but they vary, too. Some allow verbal consent while others require it in writing.

States also differ considerably on what rules a psychiatrist or psychologist must follow when beginning teletherapy with a new client.

Florida has no restrictions on telepsychologists. But Delaware spells out a very detailed approach that requires them to run a risk-benefit analysis before proceeding, the Epstein survey said.