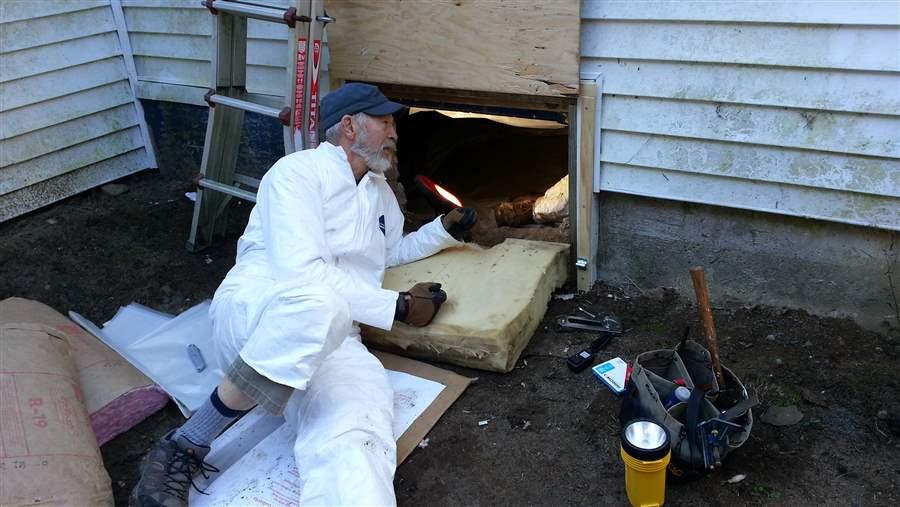 Dave Brown, 75, a volunteer for the Harpswell Aging at Home team, insulates the floor under a house in coastal Maine. Volunteers in the graying state are helping seniors remain in their homes.

HARPSWELL, Maine — Dianna Haller loved her small, one-story home in this coastal fishing town, but it didn’t love her back. The living room floor was sagging. Snakes and mice were wriggling in through a gap under the front door. And mold was seeping in through a crawl space full of standing water.

Haller, a 65-year-old widow with chronic obstructive pulmonary disease who uses an oxygen generator, was rushed to the emergency room several times this year because of breathing problems her doctors said were exacerbated by the mold. She badly needed help, but couldn’t afford the repairs.

Last month, the Harpswell Aging at Home team came to Haller’s rescue. The group of volunteers in their 60s and 70s, dubbed the Dream Team, went to work insulating and shoring up the floor, sealing the foundation, rebuilding the front door, installing rain gutters and storm windows, replacing ceiling lights that were fire hazards, and doing other work — all for free.

Across Maine, volunteers are stepping up to help rural seniors like Haller who want to remain in their homes as they age. Some work with local governments or nonprofits. Others have simply gotten together to offer a hand. Many of them are seniors themselves.

And what they are doing can be emulated by the rest of the nation, as the number of people 65 and over is projected to explode from 48 million to 77 million between now and 2035.

Maine’s rural population is older than that of most other states. Demographers project that a third of the state’s population will be 65 and over by 2032. And the challenges confronting Maine as it deals with an aging population are turning up elsewhere. Rural America is aging faster than its urban counterparts, as fewer children are born and younger, working-age adults are moving away.

John Cromartie, a U.S. Department of Agriculture geographer, said the problems would be particularly severe in New England, the Great Plains and Midwest farming states.

“The rural areas are the canary in the coal mine,” he said. “In lots of cases, older people don’t have the means to leave, even if they wanted to. And many want to stay because it’s where they were born or settled down and raised a family.”

Local governments cannot afford to pay for all the services needed to help seniors stay in their homes. State governments face the same dilemma. And retrofitting a house for aging people can be expensive. It can cost $800 to $1,200 to widen a doorway to accommodate a wheelchair, $1,600 to $3,200 for a ramp, and up to $12,000 for a stair lift.

“There isn’t enough money in Maine to deal with this problem,” said Jess Maurer, executive director of the Maine Association of Area Agencies on Aging. “It’s going to have to be community by community, using volunteers and public and private resources.”

Already, more than 60 communities throughout the state have started or are in the process of starting programs to help seniors age in their homes, Maurer said.

Some volunteers offer rides. Others grow and donate fresh fruit and vegetables. Some offer respite to caregivers. And many, like the Harpswell Aging at Home team, perform home maintenance or do chores that residents can’t do themselves.

Sandy Markwood, CEO of the National Association of Area Agencies on Aging, called what’s going on in Maine a model for other states.

“These are really small communities doing incremental changes that make a huge difference to the people who live there. They’re doing it with existing resources and the human capital they have there.”

As in other rural areas, many of Maine’s seniors live in multilevel homes without a bathroom or bedroom on the first floor. When they can no longer drive, there’s little, if any, public transportation available, and grocery stores, pharmacies and doctors can be far away. Experts say older adults who stay in their homes often do less maintenance as the years go by, so their houses often deteriorate.

“The challenges in rural areas are probably the most severe,” said Susan Reinhard, a senior vice president at the AARP Public Policy Institute. “Isolation is a serious problem. Depression goes up. Physical health declines.”

For Haller, the Dream Team not only improved her house but improved her health. She is breathing better and hasn’t been to the hospital since they did the work. “You used to smell the mold all the time,” she told volunteers who arrived to make more repairs this month. “Now I can smell the salt air.”

At the Forefront of a Trend

In Maine, people 65 and over made up 19 percent of the state’s population last year, up from 16 percent in 2010. And many state officials and advocates foresaw the coming trend.

In 2013, the Maine Council on Aging and House Speaker Mark Eves held a series of roundtable discussions about the issue with leaders of business, finance, housing, philanthropy and state and local government. That provided a framework for a summit on aging that drew 400 people in 2014, and resulted in the Maine Aging Initiative, in which groups across the state try to come up with ways to tackle the challenges posed by an older population.

Among the Initiative’s recommendations: Urging communities to help the elderly remain in their homes.

Advocates for seniors in Maine, New Hampshire and Vermont also share information about ways to help keep seniors in their homes and beef up efforts to make communities more age-friendly. The partnership is now working with more than a hundred communities in the three states.

And in 2015, Eves, a Democrat, and state Sen. David Burns, a Republican, created a legislative caucus on aging. Since then, the Legislature has passed or funded 16 measures to help older adults, including more funding for home-delivered meals and in-home care workers and expanded property tax relief for seniors.

“One of our goals wasn’t just to pass legislation, but to elevate the profile of these issues affecting our aging population so people can take the initiative,” Eves said. “If you fast-forward 10 years, I think Maine will have some lessons for other states, particularly rural ones, about how to do it well.”

Many of the lessons in Maine are to be found in the volunteer and civic groups that have sprung up or stepped in to help seniors continue to live at home.

The Dream Team in Harpswell was modeled after another home modification team, The Regulars, a group of retiree Habitat for Humanity volunteers who have been helping seniors in mid-coast Maine since 2014.

Like the Dream Team, The Regulars are an eclectic group of retirees, including a lawyer, an engineer, an FBI agent and an English professor, who volunteer for Habitat.

They work twice a week, rain or shine or snow — which is why they’re called The Regulars. They have taken on 60 jobs throughout the area. They’ve done everything from widening doors and fixing gutters to replacing floors to installing ramps. Habitat pays for materials, trains the volunteers, and provides liability insurance, staff support and a van with tools.

Many seniors who’ve gotten help from The Regulars live in substandard housing or mobile homes, which often are not insulated and can be freezing during long, cold Maine winters.

“One guy who had five bypass operations had no heat. We got the furnace working,” said George Shaw, 76, a volunteer. “We’re these people’s peers. We make them feel like they’re being helped by their own community.”

Kathy Smith, development director for Habitat for Humanity-7 Rivers Maine, said it’s not just rural seniors living in modest homes or trailers who need help. The group has assisted people who live in larger houses that are worth more, but don’t have the income to maintain them.

The Village Lodge Handy Brigade, run by a team of Masonic lodge brothers whose ages range from 19 to the mid-70s, assists seniors in the small farming town of Bowdoinham and in two other towns with everything from changing lightbulbs and installing smoke detectors to replacing storm windows and making minor carpentry fixes.

“This program helps people maintain their independence and keeps their property from deteriorating,” said Peter Warner, 60, the Masons’ lodge master.

Warner said that since his team, whose motto is “One light bulb at a time,” organized in February, it has helped about 30 seniors. On a recent fall day, two team volunteers visited the home of a grateful 76-year-old woman and her disabled sons to replace ceiling tiles in a bathroom ruined by a plumbing leak.

“Older folks don’t want to be seen as needing help, but with the Handy Brigade, they know of them and may even have someone in their family who was a Mason,” said Patricia Oh, who coordinates senior services for Bowdoinham and works with the team.

Cumberland is another Maine town committed to helping seniors remain in their homes. It budgets about $50,000 a year for an aging in place initiative that includes a program that sends trained volunteers to spend time with seniors who feel lonely or who live with a caregiver who needs a break.

Susan Gold, the town’s Aging in Place coordinator, said the program offers social and psychological support, and isn’t income-based. “Providing a friend isn’t something you can buy, even if you have a million bucks,” she said.

For Brian and Judy Hathaway, both 76, a weekly visit from volunteer Heidi Kleban makes a big difference.

Judy Hathaway suffered a stroke nearly 10 years ago. She has difficulty communicating and often gets frustrated. Her caregiver husband said he desperately needs some time away, and when Kleban visits he can take off and know his wife is having a good time playing cards or taking walks. “Heidi comes in and Judy just melts. She loves her,” he said.

Kleban, 46, said she volunteers because she enjoys the company of older people. “They have a whole life experience to share,” she said. “And besides, who else would have taught me gin rummy?”