After Hurricane Matthew, Haitians Hope for Change in U.S. Policy 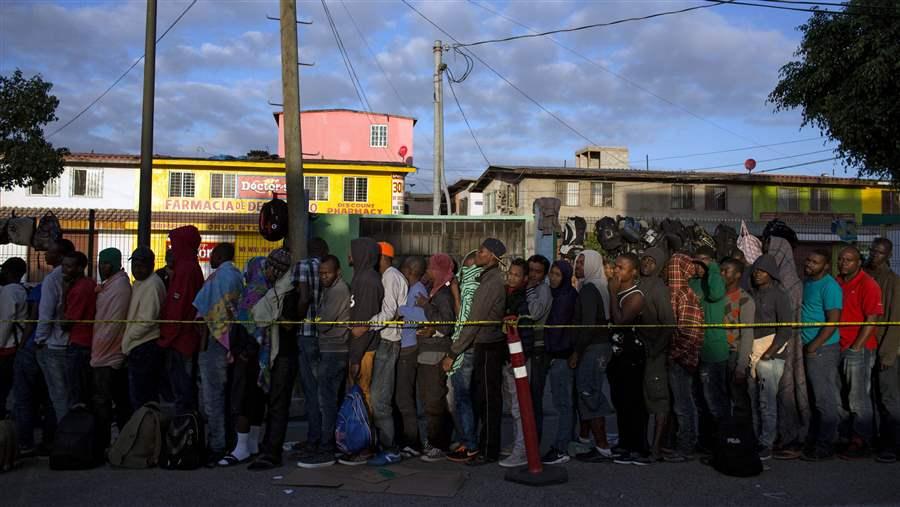 Haitian and African migrants seeking asylum in the U.S. line up outside a migration office in Tijuana, Mexico. Haitians are flooding the border south of San Diego, prompting the U.S. to resume deportations for those who do not qualify for asylum.

Just days before the hurricane, the U.S. Department of Homeland Security said it would crack down on thousands of Haitians who had been entering the country illegally across the southwest border since the spring, putting an end to special immigration policies Haitians have enjoyed since an earthquake devastated their country in 2010. Under the new policy, the department said it would deport Haitians who could not show they had been persecuted or feared persecution at home.

The department suspended deportations in the wake of the hurricane, which was estimated to have killed at least a thousand people. But many are calling on the administration to do more to help.

A bipartisan group of members of Congress asked Obama to stop noncriminal deportations, warning that sending people back would further exacerbate Haiti’s “chaotic situation.” And immigration advocates and Haitian expatriates in Miami say Haitians should again be granted special status that would allow them to stay in the U.S. temporarily.

In announcing the crackdown, Secretary of Homeland Security Jeh Johnson said that the situation in Haiti had improved enough since the 2010 earthquake for the U.S. to resume deportations.

The surge of Haitians arriving at the U.S. border, almost all at a crossing just south of San Diego, began in May. From October to August, U.S. Customs and Border Protection agents encountered about 4,400 Haitians at the border, compared to about 360 the year before, according to the agency.

And thousands more are on their way. Immigration and Customs Enforcement Director Sarah Saldaña told Congress last month that 40,000 more Haitians were making their way to the U.S., calling it “an emergency situation” on the Mexico-California border. That number may rise as more people flee after the hurricane, immigration advocates said.

Not everyone is pleading the Haitians’ case for avoiding deportation.

Jessica Vaughan, director of policy studies for the Center for Immigration Studies, a nonprofit that advocates for tighter immigration policies, says they should be allowed to stay in the U.S. only if there are logistical impediments to getting them home, such as closed airports in Haiti, or if they qualify for asylum.

Vaughan and others who study immigration say Haitians come here for many reasons, most of which don’t qualify them for asylum: Haiti is the poorest country in the Americas and one of the poorest in the world. And its political system is on shaky ground.

The policy the U.S. put in place after the earthquake motivated many to come, Vaughan said, and while many knew they would not qualify for asylum, they also knew they were unlikely to be deported.

Cracking Down on Crossings

Since the 2010 earthquake, the U.S. has made it easy for most Haitian immigrants to stay.

Those who were convicted of crimes or who were thought to pose a threat to national security were deported. All others were able to apply for asylum and were given permission to stay until they could plead their case at a hearing, which can often come years later, said Faye Hipsman, a policy analyst with the Migration Policy Institute.

It’s unclear whether more Haitians have been arriving this year. What is clear is that they are taking a new route, connecting with smugglers who are leading them through Central America on foot, by bus or by plane, and across the southwest border.

Most haven’t lived in Haiti for years, Hipsman said. They have been in Brazil, which offered them work permits after the earthquake. Now, with the Brazilian economy collapsing, many are without work, and they have no deep ties there, she said.

Since the change in DHS policy, Haitians are being detained at the border until their asylum hearings, which are being expedited, according to immigration attorneys in California and Miami.

But attorneys such as Holly Cooper, associate director of the Immigration Law Clinic at the University of California-Davis, say stricter immigration policies do not deter desperate people from trying to get into the U.S. She said Haitians may continue to try to come here, especially after the hurricane.

“When people are afraid, or economically destitute, they are going to risk anything that they have,” Cooper said. “When your life and your children’s lives are not in safety, you’re willing to risk a possible deportation.”

Why Haitians are crossing into San Diego isn’t clear. It could be that smugglers are making that route available. It could be that migrants feel the California border region is safer than others. Or it could be because there are direct flights from southern Mexico to Tijuana.

After crossing, most Haitians have been heading where they have always gone, many to Miami, some to the Northeast.

Nearly half the 636,500 people who were born in Haiti and immigrated to the U.S. reside in Florida, according to the 2014 American Community Survey. New York, Massachusetts and New Jersey also have large numbers of Haitians.

There, they find family, community groups and government programs to help them settle.

Overall, the number of people of Haitian descent living in the U.S. is about a million, including both immigrants and people who were born in the U.S., according to the 2015 American Community Survey.

In California, the influx has been noticeable. About 1,500 Haitians who entered the U.S. between 2010 and 2014 live in the state, according to the 2014 survey. But last month alone, the county of San Diego assisted 150 Haitians who plan to stay in the state.

The county gives them health screenings and helps them look for work and apply for benefits.

Vaughan of the Center for Immigration Studies said that something needed to be done to combat the influx, which was burdening local governments. Many of the immigrants don’t speak English. They need immediate assistance, Vaughan said.

But in Miami, Democratic state Rep. Daphne Campbell, a Haitian immigrant who represents parts of Miami, said that if the U.S. deports Haitians, many will go back to a country where they may no longer have families, a place to stay or connections to jobs.

Cheryl Little, an immigration attorney in Miami who works with Haitians, said those she helps have nothing to go back to. “It’s been difficult for us, when getting these calls, to provide peace of mind.”