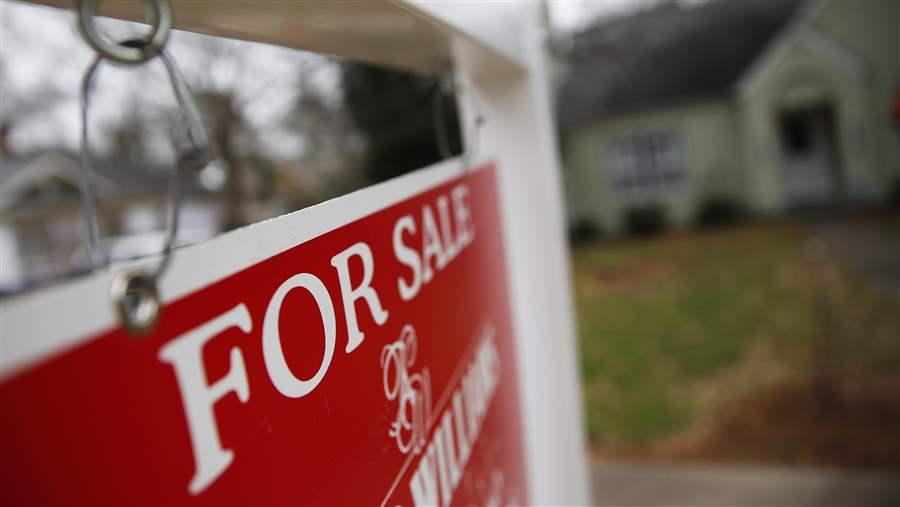 A “For Sale” sign hangs in front of a home in Atlanta. As the construction of affordable single-family houses fails to keep up with demand, the number of houses being flipped is increasing.

The number of flipped houses is at a six-year high. But while such rapid turnover helped fuel the housing crisis a decade ago, advocates and analysts say the current wave is helping to ease a shortage of affordable housing in some parts of the country.

The resurgence of flipping, or selling a house less than a year after buying it, comes as the construction of affordable single-family houses fails to keep up with demand, as builders concentrate on multi-family housing.

In some states like Florida and Nevada, which have large stocks of cheap, foreclosed houses, flipping is boosting the housing supply for homeowners and for investors who want to rent out the properties. The renovated homes are helping to bring downtrodden neighborhoods back to life, while making homeownership possible for some first-time and low-income buyers.

“This flipping activity could be seen as a social good if it’s bringing houses up to standards and putting them back on the market,” said Steven Swidler, an Auburn University professor who has studied flipping.

But he also warned that flipping can help drive up already-rising housing prices. “In other areas,” he said, “it could be putting it beyond the price points for affordable housing for some people. It’s all about location, location, location.”

A total of 51,434 single-family homes and condos were flipped in the second quarter of 2016, up 14 percent from the previous quarter and the highest number since 2010, according to data from ATTOM Data Solutions. The number of flippers, including individuals, amateur investors and businesses, reached 39,775, the highest level in nine years.

In Tampa, Florida, Memphis, Tennessee, and Visalia, in California’s San Joaquin Valley, one in 10 homes sold in the quarter was flipped. Florida, Tennessee and Nevada are the states with the highest rates of flipping, with 7 percent or more of homes sold within a year. And in many of those places, the homes being flipped are selling well below the rest of the market, a sign that they are helping to fill a shortage of affordable housing.

Nationwide, 5.5 percent of single-family homes and condos were flipped, a small increase over the second quarter of 2015, but still well below the peak in 2006, when 9 percent of sales were flips.

In some high-priced places such as New York City, housing advocates complain that flippers are reducing the supply of affordable housing and driving out low-income residents and sometimes the middle class.

But in other areas of the nation — parts of Florida that have been plagued with foreclosures, for instance —flipping can be part of the process of getting affordable housing back on the market, said Hector Sandoval, a University of Florida economist who has studied flipping in the state.

“Bringing these houses back to the market is good in general for the neighborhoods where they are located,” said Sandoval. “It increases the supply, which means prices can’t go too high, and they should be affordable, at least for the middle class.”

In Nevada, today’s flippers have found a niche fixing up foreclosed or abandoned housing that may need much work and then selling it to investors who are willing to recoup profits slowly by renting, said Swidler, the Auburn University professor who analyzed the way home flipping in Las Vegas contributed to the housing meltdown of the last decade by driving up prices.

About 7 percent of sales in the state were flips in the second quarter of 2016, and the rate is about the same in Las Vegas. But today’s flippers are not the same as those who helped drive a speculative frenzy 10 years ago.

“Conditions are different now. You can’t just buy a house and expect to make a profit,” Swidler said. “In many cases [flippers] have to go in there and replace wiring, put in new refrigerators. Some of these places had holes in the walls. It took extensive work to renovate them.”

Nationally, home prices have been rising since 2012, and the increases are even steeper in some areas with high levels of house flipping, like Tampa and Nashville. But with housing prices rising faster than incomes in many parts of the nation, rehabbing foreclosed houses has the potential to return affordable housing at a time that it’s urgently needed.

In Florida, flipping has been revived by a steady supply of foreclosed housing and a demand for affordable housing that’s making once-marginal neighborhoods near Tampa more appealing to buyers of renovated homes, said Christopher McCarty, director of the state Bureau of Economic and Business Research.

Rising rents also are encouraging small investors to buy renovated houses and rent them out, McCarty said, especially along the state’s central I-4 Corridor from Tampa to Orlando.

Peter Lee, a real estate agent and investor in Tampa, said unemployed carpenters and other construction workers sidelined by the housing bust and slowdown in new construction have found a new line of work renovating homes in the area.

The buyers might be landlords looking for rentals, first time buyers or retirees from the Midwest, he said, all of whom find the prices affordable. “You’re giving them a shiny renovated house for $100,000. They’re in heaven.”

Tennessee has the second-highest rate of house flipping, at 7.2 percent. House prices have gone up nearly 20 percent in Memphis in the last year, and nearly 7 percent in Nashville. The typical flipped house in Nashville was bought for $114,500 and sold for $175,900, well below the area’s median home price of $258,000.

Rae Sovereign, an affordable housing activist in East Nashville, said the city is facing an affordability crisis as developers tear down houses to build new rentals. But flippers have played a generally positive role, she said, fixing up battered and sometimes foreclosed homes.

“I don’t have a problem with people who want to fix up a house for a profit but still make it affordable,” she said. 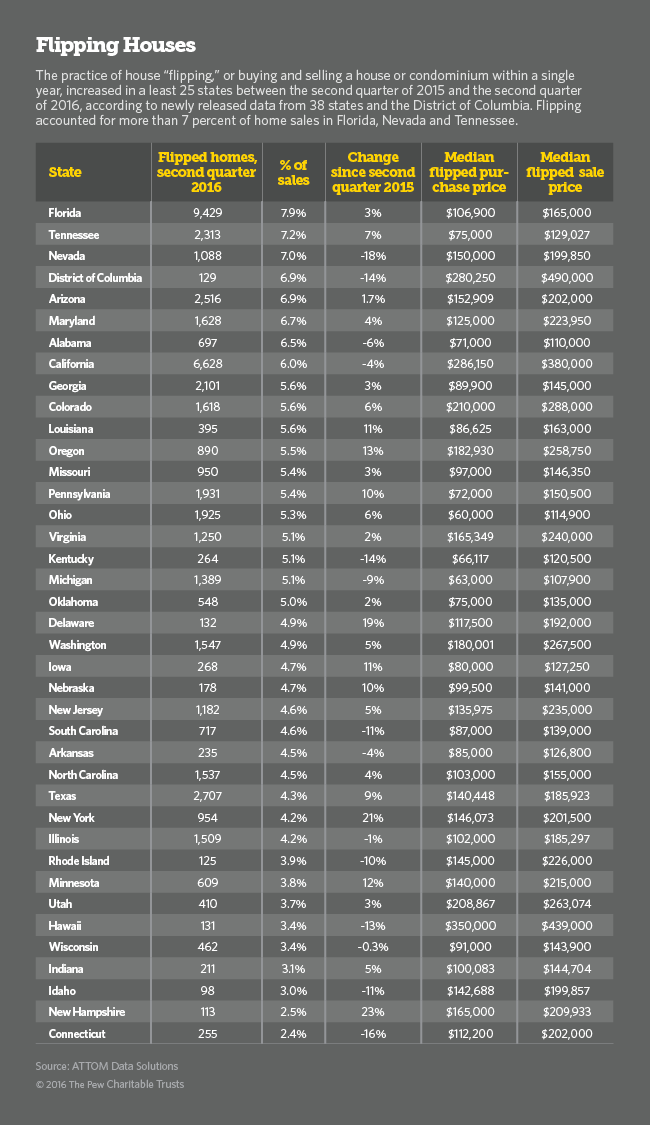 The resurgence of flipping is not helping to ease the affordability crisis everywhere.

A study earlier this year by New York City’s Center for NYC Neighborhoods, a public-private partnership that promotes affordable housing, found that affordable housing was becoming harder to find in parts of Queens and Brooklyn where hundreds of homes were flipped last year.

On average, Brooklyn homes bought by flippers in recent years were affordable for families making $75,000 a year — near the typical income for the borough. But by the time they were sold, only families making $150,000 could afford the same house.

“Flipping reduces the quantity of affordable homeownership opportunities on the market by moving homes to significantly higher price points,” the study concluded. Typical profits were more than $500,000 per sale in Bushwick, Brooklyn.

Typical flipping profits topped $110,000 in Silicon Valley, San Francisco, Los Angeles and San Diego, California, as well as New York, according to ATTOM’s data. The largest flipping profits were in the District of Columbia, where the typical flip netted $209,750.

Prices rose so quickly in the District of Columbia that the district housing authority evicted some low-income tenants and sold their apartments to finance other renovations. Democratic Mayor Muriel Bowser promised last year to investigate whether the city’s own flipping practices were hurting her efforts to preserve affordable housing.

Some states, including Idaho, Virginia and Washington, have laws that require house-flippers to register as contractors. In Washington, either the seller of a flipped house or a contractor hired to fix it up must be registered and have a $12,000 bond.

“This way the buyer has some recourse if there’s a fire from bad wiring or sewage in the dishwasher because of the plumbing. Those things happened,” said Shari Purves-Reiter of Washington state’s Department of Labor & Industries.

In Idaho, a contractor license is required to do rehab work on a house unless it’s the homeowner’s “primary or secondary residence.” There are enforcement problems because of that wording, said Bill Hatch, a spokesman for the state Division of Building Safety.

When flippers are questioned, “they invariably come up with something like ‘Oh, this is my secondary home,’” Hatch said. The best inspectors can do is to cite repeat offenders, he said.