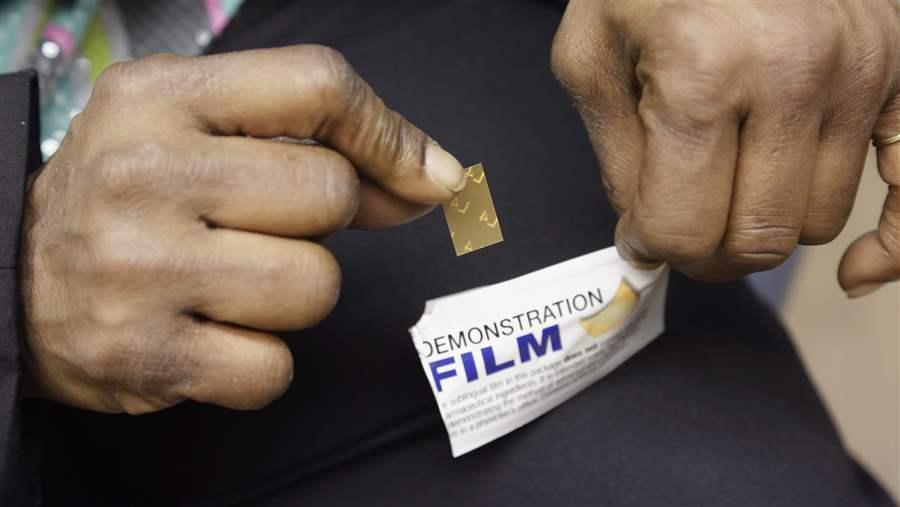 A recovering heroin addict holds a dose of Suboxone, the most commonly sold form of buprenorphine, one of three opioid addiction medications. The availability of buprenorphine varies widely among states because of Medicaid rules that limit prescriptions.

In an opioid epidemic that is killing tens of thousands of people nationwide, finding and paying for addiction treatment remains a challenge for low-income Americans, particularly in the South and parts of the West.

The Affordable Care Act required Medicaid, the joint state-federal health program for the poor, to start paying for all available substance abuse treatments in 2014, a provision seen as a boon for low-income people who previously were not covered for addiction treatment.

But Medicaid coverage of the most widely used opioid addiction medication, buprenorphine, varies widely among states. Many doctors don’t want to treat Medicaid patients for addiction. And red tape can make it difficult for many Medicaid recipients with addictions to get effective treatment.

All this has consequences as the nation battles the epidemic. As a group, Medicaid enrollees suffer from opioid addiction and other substance abuse disorders at a higher rate than the general population.

“What we see in far too many Medicaid plans are restrictions and approaches to addiction treatment that are not in line with the way we treat other diseases,” said Dr. Kelly Clark, president-elect of the American Society of Addiction Medicine (ASAM). “Some plans require patients to wean off of their addiction medications. Would you tell a heart patient he needs to taper off of his medication after a year?”

All states reimburse for the medication, but in many places, the fees Medicaid pays doctors are considered too low and the paperwork too time-consuming to attract an adequate number of providers willing to treat Medicaid enrollees with addictions.

In addition, coverage provisions such as prior authorizations, dosage and duration limits, requirements that patients “fail first” at cheaper treatments that do not include medication, high copays and excessive counseling requirements make it difficult for Medicaid enrollees to get effective treatment for the chronic, lifelong disease of addiction.

A new report on prescription sales across the country indicates Medicaid foots the bill for about a quarter of all buprenorphine prescriptions, but varying coverage limitations mean many low-income people who need medication-assisted treatment aren’t getting it, depending on where they live.

Overall, U.S. pharmacies dispensed 12.5 million prescriptions for buprenorphine in the 12 months ending June 30, 2016, a 6.4 percent increase over the previous year, according to the report. Commercial insurers paid for 57 percent of prescriptions, Medicare paid for 7 percent, and patients paid out-of-pocket for 11 percent of all retail sales.

The new report — funded by Advocates for Opioid Recovery, a nonprofit group led by former U.S. Rep. Patrick Kennedy, D-R.I., former U.S. House Speaker Newt Gingrich, R-Ga., and civil rights activist Van Jones — calls on federal and state officials to adjust any Medicaid policies that may be preventing people with opioid addictions from receiving treatment with medication, which research has shown to be more effective than treatments without medication. The report was conducted by IMS Institute for Healthcare Informatics, which collects nationwide data on sales of prescription drugs.

“Even in the best of circumstances, obtaining access to opioid recovery programs that include medication is tough,” Jones said. “For the most vulnerable in our country who rely on Medicaid, this data proves it is nearly impossible in many states.” 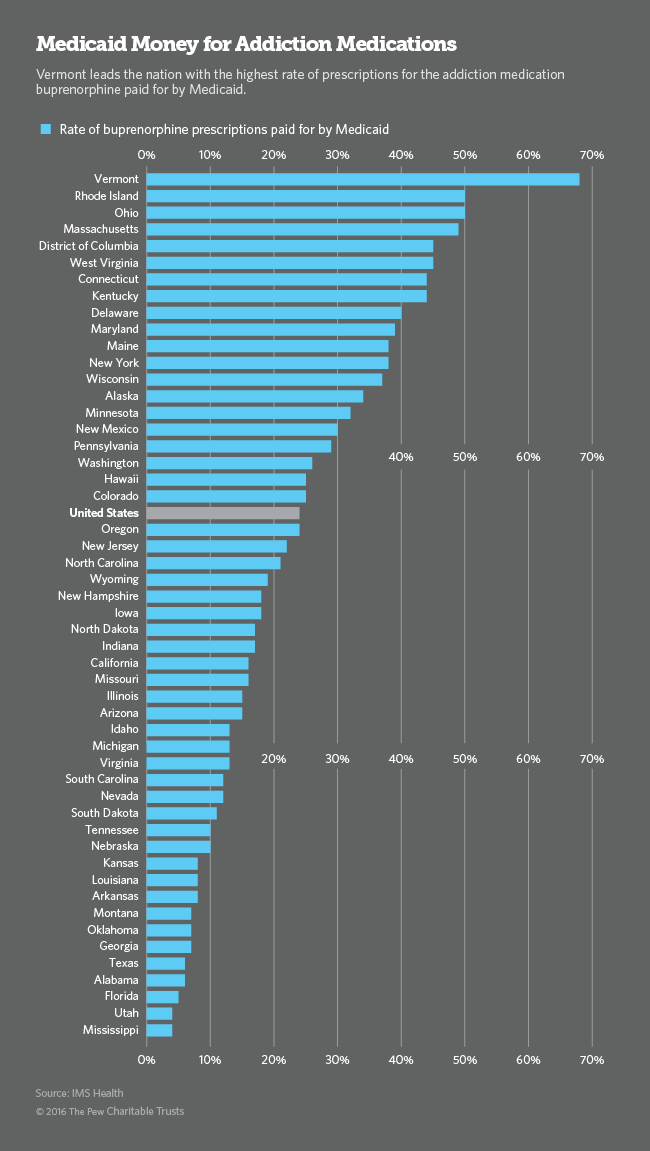 Matt Salo, executive director of the National Association of Medicaid Directors, said an analysis of buprenorphine payments may serve as a proxy for coverage of addiction treatment in general, but it does not tell the whole story.

For Medicaid directors and governors in nearly every state, he said, the opioid epidemic “is an extraordinarily complex and multifaceted problem that involves far more than simply paying for buprenorphine prescriptions. There are no quick fixes.”

Now, all states are required to pay for addiction treatment for all enrollees, including counseling, residential care and all three FDA-approved medications: methadone and buprenorphine, which act as replacement opioids, eliminating withdrawal symptoms and suppressing drug cravings, as well as injectable naltrexone, sold as Vivitrol, which blocks the euphoric effects of opioids and alcohol.

States were also given the opportunity to expand their Medicaid coverage to able-bodied adults, which for the first time provided coverage for millions of uninsured adults, including many who already suffered from substance abuse disorders.

The combined provisions of the Affordable Care Act represent “the biggest change in a generation for addiction services,” said Robert Morrison, executive director of the National Association of State Alcohol and Drug Abuse Directors.

But building a network of providers and developing quality standards and payment structures for addiction treatment has proved challenging for Medicaid programs. In addition, concerns over potential diversion of buprenorphine to street markets, and widespread bias against its use — which many consider trading one addiction for another — has led to a variety of coverage restrictions.

“There’s a lot of concern, some legitimate and some misguided, about the abuse and diversion of buprenorphine. Some of the rules designed to decrease misuse are really not evidence-based and often have unintended consequences,” Clark of ASAM said.

In addition, 19 states chose not to expand their Medicaid programs to low-income adults under the Affordable Care Act, leaving uninsured residents to pay for medication assisted treatment on their own or seek help from free or federally subsidized treatment programs, most of which do not provide medications.

Vermont, which like other New England states was hit hard by the opioid epidemic nearly a decade ago, got an early start in developing its Medicaid addiction treatment plan.

As soon as Vermont expanded Medicaid to low-income adults in January 2014, it quickly developed quality standards, education and funding for physicians and other health care providers to help them treat the burgeoning number of low-income Vermonters addicted to heroin and prescription painkillers.

Among other efforts, Vermont’s Medicaid program provided a nurse and a licensed addiction clinician at no charge for every 100 patients treated in private medical practices or community health clinics.

In addition to paying for 68 percent of all prescriptions for buprenorphine, Vermont Medicaid pays for 80 percent of all medications and services provided at regulated opioid treatment centers, which offer all three addiction medications, according to Anthony Folland, clinical services manager for the Vermont Department of Health’s Alcohol and Drug Abuse Programs.

Vermont has the highest rate of buprenorphine use in the country, followed by West Virginia, Kentucky, Tennessee and Maine, according to the report’s analysis of retail prescription data. In total, roughly 6,300 of Vermont’s 627,000 residents are receiving one of the three available medications for treatment of opioid addiction, Folland said.

In part because of the stress and trauma associated with poverty, Medicaid enrollees are more prone to substance abuse than the rest of the population. But with opioid addiction, there’s an additional reason for the group’s disproportionate addiction rate.

Medicaid beneficiaries are prescribed highly addictive painkillers at twice the rate of non-Medicaid patients, and are at three to six times the risk of prescription opioid overdose.

A North Carolina survey published in 2010 found that while the Medicaid population represented about 20 percent of the population, it accounted for one-third of drug overdose deaths. And a study by the U.S. Centers for Disease Control and Prevention found that 45 percent of people who died from prescription opioid overdoses in Washington state were Medicaid enrollees.

In New Hampshire, which has the third highest opioid overdose death rate in the country, Medicaid coverage of buprenorphine is only 18 percent of total prescriptions, well below the national average.

“The good news is that we now have lots of resources to pay for addiction services, including medication-assisted treatment, that we didn’t have before,” said Joseph Harding, director of the state’s Bureau of Drug and Alcohol Services. “The bad news is that New Hampshire still has limited capacity in its communities to provide addiction services.”

The state has been working to develop those services, with millions in state and federal grants to community health care providers willing to start or expand addiction treatment, Harding said, as well as free education for doctors who want to seek a federal license to prescribe buprenorphine.

New Hampshire’s Medicaid program only started offering addiction benefits in August 2014, initially to about one-third of its roughly 186,000 beneficiaries. In July, all other enrollees became eligible. Already, more than 9,400 New Hampshire Medicaid enrollees are receiving some form of addiction treatment, according to the state agency.

As in other states, the cost of buprenorphine, about $300 per patient per month, is starting to add up. Even with its relatively low payment rate, New Hampshire, along with many other states, including Vermont and Massachusetts, ranks expenditures for buprenorphine among its top Medicaid costs.