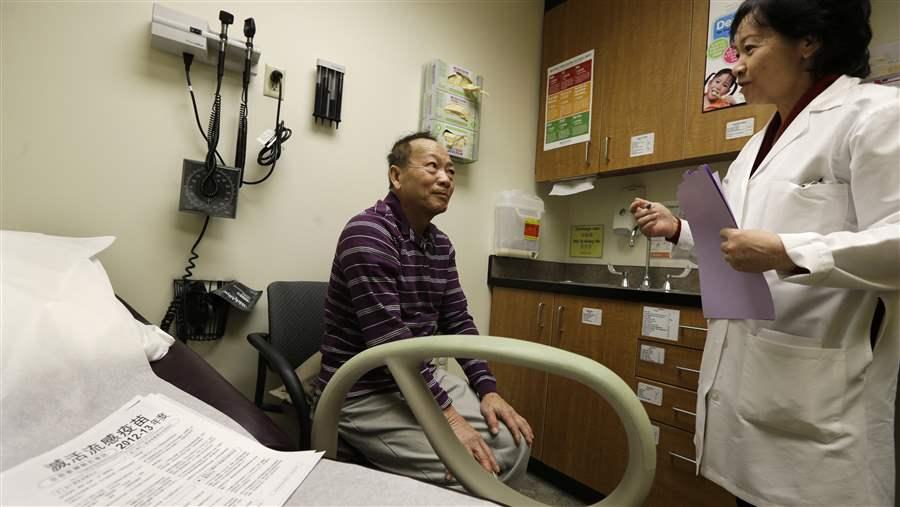 A Vietnamese-speaking patient receives a checkup in Seattle. A new federal rule requires hospitals and other health care providers to offer interpreters to many non-English speakers.

A 9-year-old girl, misdiagnosed with the stomach flu, died after a doctor failed to communicate to her Vietnamese-speaking parents that the drug he prescribed for her could have dangerous side effects.

A 78-year-old stroke victim had to have her leg amputated after doctors and nurses didn’t understand her when she complained, in Russian, of pain and numbness.

And a 7-year-old boy suffered organ damage because his pediatrician mistakenly diagnosed him with strep throat, having struggled to communicate with his Spanish-speaking father and grandparents during repeated visits over several weeks.

New federal rules requiring thousands of hospitals, doctors and dentists to provide free interpretation and translation services for people who don’t speak English aim to prevent tragedies like these, which were among those included in a study of interpretation-related malpractice cases in four states.

The new rules, which apply to providers who receive Medicaid reimbursement or other federal funds, are expected to expand access to preventive care and reduce medical costs, at least in the long run. A language other than English is spoken at home in 21 percent of U.S. households.

“The language services are going to keep people healthier and that will end up saving health care dollars down the road,” said Cary Sanders of the California Pan-Ethnic Health Network. “It’s a small investment for a big return.”

But some struggling rural hospitals and smaller medical and dental practices are worried about the cost of following the new rules, which require them to offer interpretation and translation services for the most popular 15 languages in their state.

In a letter to the U.S. Department of Health and Human Services, the American Medical Association argued that “the financial burden of medical interpretive services and translation should not fall on physician practices.” The AMA suggested that insurance plans should be required to cover those services.

The American Dental Association described the new rules as “confusing, duplicative and burdensome, as well as unnecessary,” and a coalition of dental groups that includes the ADA warned that dentists may turn away Medicaid patients who don’t speak English to avoid having to comply.

And the American Osteopathic Association, which represents doctors who practice osteopathic medicine, is worried about how the rules will affect small practices. “If physicians don’t receive additional funding or the rules are enforced in a strict manner then I can see some doctors choosing not to take Medicaid patients,” said Laura Wooster, interim senior vice president of public policy for the group.

Some states have their own laws related to language services. A number of states, including Kansas, Louisiana and Michigan, require that non-English-speaking women considering abortions receive information about the procedure or have their questions answered in their own languages.

The Civil Rights Act of 1964 prohibits discrimination on the basis of race, color, religion, sex or national origin. In 2000, President Bill Clinton issued an executive order reiterating that hospitals and other health care providers that receive federal financial assistance under health plans such as Medicaid, Medicare and the Children’s Health Insurance Program have to meet the language needs of non-English speaking patients.

But Clinton’s order didn’t specify how to do so. Without any guidance, many providers have been relying on family members — even minor children — to serve as interpreters.

An article published in August in the journal Health Affairs found that a quarter of the hospitals with the greatest need for language services (based on the surrounding population) did not provide such services in a systematic way, and nearly a third of all U.S. hospitals don’t offer language services at all.

“The services are definitely not matching the need,” said Melody Schiaffino, an assistant professor at the Graduate School of Public Health at San Diego State University and one of the coauthors of the Health Affairs paper.

Using an interpreter unfamiliar with medical terminology can produce dangerous misunderstandings. A study published in 2012 found that serious medical errors were less likely to occur with professional health care interpreters than with interpreters who don’t have special training, such as bilingual friends or family members, or no interpreters at all.

A provision in the 2010 Affordable Care Act (ACA) aimed to shore up interpreting services and this month the federal government is finally rolling out rules that detail the specific steps that health care providers must take. The rules apply to about 900,000 physicians, and 133,343 hospitals, home health agencies, nursing homes and other health facilities. It also applies to at least 180 insurers.

Under the rules, health care providers must post notices telling patients and their families that language services are available. Websites and other written materials must be translated into the 15 most frequently used non-English languages spoken in the state.

In Kansas, that means providing interpretation and translation services for the state’s 525 Swahili speakers. Providers in Idaho must be prepared to help 245 residents who speak Ukrainian, while those in Alabama must be ready to serve 484 residents who speak Japanese.

The rules require that providers offer interpretation services during direct encounters and translations of vital written communications, including discharge and medication instructions, explanations of benefits and appeal notices.

They also require that interpreters be trained in medical terminology and health care ethics. Family members or friends may not substitute for a trained interpreter unless requested by the patient, and bilingual staff members can only interpret in an emergency.

The new regulations apply to all hospitals and other health care providers — doctor’s offices, dental offices, and clinics — that take federal money. Doctors who see patients on Medicaid are covered, but physicians who treat patients in certain Medicare plans would be exempt (unless they also see patients on Medicaid). The regulations also apply to insurance marketplaces created under the ACA, and insurers that participate in them.

Health policy experts say the new rules will improve the health of non-English speakers by making it easier for them to get preventive care, helping them avoid more serious — and costly — health crises. Studies have found that language barriers prevent patients from receiving regular checkups, cholesterol and cancer screenings, breast exams and flu shots. When they do visit a doctor, non-English speakers often misunderstand their doctor’s advice, or struggle with prescription directions.

“If someone can’t understand what their doctor says or what they are signing in a consent form, that is not considered equal access to health care,” said Marina Hadjioannou Waters, a vice president of the National Council on Interpreting in Health Care, which advocates for greater availability of interpreting and translation services for non-English speakers.

The requirement also may save money by making it less likely that non-English speakers will be readmitted to the hospital after they are released, and by reducing the likelihood of malpractice claims.

One analysis of medical malpractice claims found that 2.5 percent of the reviewed claims were the result of inadequate language services.

For patients who are not covered by Medicaid or for those who live in other states, providers must pick up the tab.

Hennepin County Medical Center in Minneapolis has 140 full- and part-time interpreters who speak 23 languages (Spanish, Somali and Hmong are the most common languages requested). The hospital expects to provide language services 340,000 times by the end of the year.

Michelle Chillstrom, who oversees the program at Hennepin County Medical Center, said the cost is about $8.8 million a year, out of a total budget of $850 million. The hospital receives about $3.4 million in reimbursement from Medicaid and other medical assistance programs, she said.

Michigan’s Medicaid program does not cover language services. At the University of Michigan Health System, interpretation and translation costs about $3 million a year out of a total budget of $3.1 billion, according to Michelle Harris, who oversees the program there.

The hospital system has 100 in-house interpreters, and in the last year they provided help in 80 languages. The hospital receives about 2,000 requests a month, most frequently for Spanish, Mandarin and Arabic.

Like many others, the Minnesota and Michigan hospitals contract with private companies for more obscure languages they may encounter among patients, and often use video conferencing for those services.

That’s how hospitals in less-populated areas frequently meet their language service needs. Central Maine Medical Center in Lewiston contracts with a private company to provide all interpretive services through video links. A spokeswoman for the hospital said its greatest needs are for Somali, because of a large refugee population that was settled in central Maine, and French, as a result of the French-Canadians who move across the border for work.

The National Rural Health Association and America’s Essential Hospitals, which represent public and nonprofit hospitals, said their members were worried about paying for the new requirement, though they support its intent.

Rosemary Blackmon, chief operating officer of the Alabama Hospital Association, said the new rules may be perplexing to some hospitals in her state.

“They have to have notices in the top 15 languages spoken in the state,” Blackmon said, “but we have counties that probably don’t even have a single person who speaks a foreign language.”