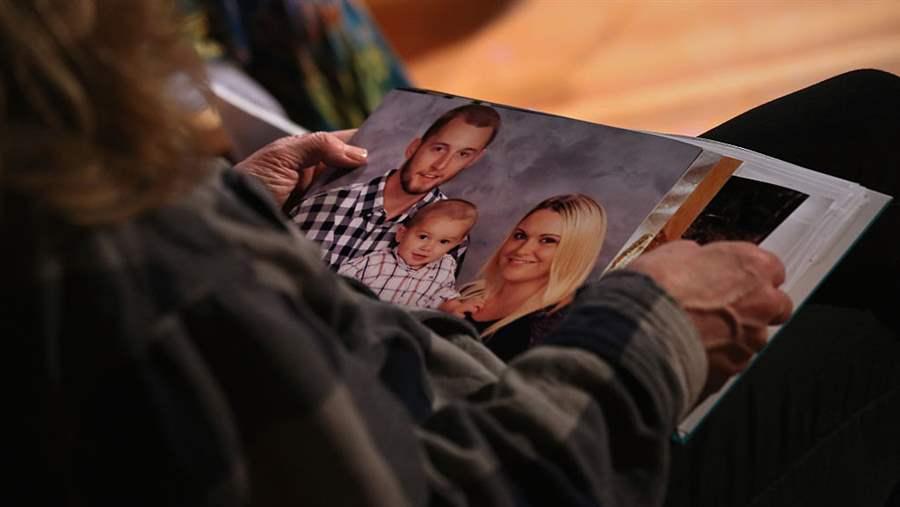 Kim Sullivan, whose son (in photo), died of a heroin overdose, prepares to talk to students in Groton, Connecticut, about the dangers of drug addiction. Across the country, an increasing number of children are being admitted into foster care, which some state officials attribute to the opioid epidemic.

The nation’s drug-addiction epidemic is driving a dramatic increase in the number of children entering foster care, forcing many states to take urgent steps to care for neglected children.

Several states, such as New Hampshire and Vermont, have either changed laws to make it possible to pull children out of homes where parents are addicted, or have made room in the budget to hire more social workers to deal with the emerging crisis.

Other states, such as Alaska, Kansas and Ohio, have issued emergency pleas for more people to become foster parents and take neglected children, many of them infants, into their homes.

“We’re definitely in a crisis, and we don’t see an end in sight any time soon,” said Angela Sausser, executive director of the Public Children Services Association of Ohio, a coalition of public child safety agencies in the state.

In many states in the East and parts of the Midwest, addiction to opioid painkillers and heroin is helping to drive the crisis in foster care. In other parts of the Midwest and in the West, abuse of methamphetamines is. Regardless of the source, states are scrambling to deal with the fallout on children:

“For everyone, the crisis happened so quickly, there was no time to gear up,” said Moissades, whose agency ensures that children receive timely services and makes policy recommendations to better serve children in need. “No one knew it was going to be as big.”

Meanwhile, some states are taking extra steps to address the crisis.

In June, New Hampshire Gov. Maggie Hassan, a Democrat, signed a law that defines a parent’s opioid abuse as child neglect, making it easier for child welfare authorities to intervene.

In December, Vermont Gov. Peter Shumlin, a Democrat, called for $8.4 million to beef up the foster care system in his state, including hiring more social workers to try to deal with a growing number of children abandoned, neglected or abused by parents who are addicted to drugs.

“We’re losing the battle, not winning it. The children are the biggest victims,” Shumlin said. “We’ve lost babies to parents who beat them, strangle them, bang their heads against the floor, sexually abuse them. And it’s happening because of opioid addiction.”

National data doesn’t identify how many children are removed from their homes because of a parent’s substance abuse. And there’s no one standard for how states report substance abuse and child neglect. But many state officials say the surge in foster care cases is a direct result of the drug epidemic.

The upsurge represents a turnaround for the nation’s foster care system.

Some states that haven’t been hit as hard by the opioid epidemic also have seen a bump in the number of children entering foster care, said Nancy Young, director of Children and Family Futures, a think tank focused on families affected by alcohol and drugs.

This could be the result of a combination of factors, including stricter reporting of child abuse cases. Arizona, for example, was faced several years ago with a serious backlog of child abuse cases and children died. The state revamped its child welfare system and hired more investigators. In 2014, the number of children removed from their homes increased 13.2 percent from the previous year.

A few things are certain: The median age for a child in foster care was 8 years old in 2014, down from 10.6 in 2005. Infants (less than a year old) made up a larger share of children going into foster care in 2014 than they did 10 years ago. And child welfare workers report that they are seeing an even greater increase in infants in the past year.

This may be partly attributed to new federal laws requiring that hospitals notify child protective services of any infants affected by prenatal substance exposure.

Children also are staying in foster care longer, and more children are entering the system because of a parent’s substance abuse, said Young, who in February testified before a U.S. Senate committee on the opioid epidemic’s impact on foster care.

In the past, the largest group of children taken from their parents had been teens. Today, the state has more young children (under age 6) in foster care than at any other time in its history, said Karen Shea, interim deputy director of the Vermont Department for Children and Families.

And drugs are behind the shift, Shea said. Of the children under age 6 placed in foster care last year, more than half came from homes where abuse of opiates was involved.