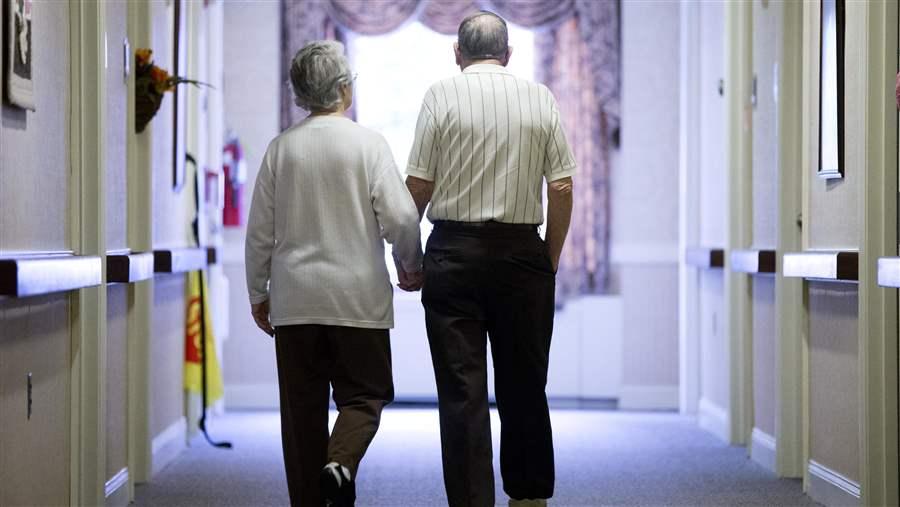 An elderly couple in Easton, Pennsylvania. Some older retirees are finding that Snow Belt states, where their families live, may be more to their liking than the sunny states they first retired to.

Snow Belt states such as New York and Michigan that lose retirees to the Sun Belt states of Florida and North Carolina may be seeing more of them coming back — older and perhaps poorer than when they left.

Even California, which has seen people leave to spend their retirement years in Arizona with its lower cost of living, may be seeing a boomerang effect as elderly people arrive at a more advanced age with less money and more demands on social services.

Nearly 54,000 people 70 or older left the popular retirement states of Arizona, Florida, North Carolina, South Carolina and Texas between 2012 and 2014 and went to the states that lose the most young retirees — California, Illinois, Michigan, New Jersey and New York.

That’s a 45 percent increase in older seniors moving to those states from the three earlier years, 2009 to 2011, according to a Stateline analysis of census data from the IPUMS project at the University of Minnesota. Moves from Florida to New York nearly doubled to more than 11,000 during that time. Moves from Arizona to California jumped 80 percent to about 9,500.

The shift may not mean that all of the people who made the moves are returning to places they came from. But it suggests to many researchers that many of them are moving because they aren’t as healthy or wealthy as they were just a few short years ago, and now they are seeking help from family.

They also could be homesick for old friends and neighbors, or want to spend their remaining years close to their children and grandkids.

“People might need to rely on help from family more,” said Karen Smith Conway, an economics professor at the University of New Hampshire, who has studied the migration shifts of older Americans.

A lower cost of living, combined with sunshine, is what makes retirement in Florida, the Carolinas or Arizona enticing to many young retirees from the Snow Belt, who anticipate active lives on the golf course or tennis court.

Florida and Texas, for instance, have no state income tax.

The gap is even greater when it comes to housing. The cost of housing in California is more than twice the national average. It’s much higher in New Jersey and New York than it is in the retirement states. It’s also higher in Michigan than it is in North Carolina, and in Illinois than it is in Texas.

So why leave a low-cost state for a costlier — and often colder — one?

Jon Rork, an economics professor at Reed College who studies retirement migration, said younger retirees will head south when they are healthier, independent and have more spending power. They may return, he said, when they aren’t as healthy or wealthy, and are more dependent on the state for health care and other services.

New York and New Jersey, for example, offer more generous Medicaid payments to beneficiaries than other states, which can be attractive to low-income seniors who have spent their retirement money. New York also has other programs to help seniors financially, such as a New York City program that freezes rent for low-income seniors living in rent-regulated apartments.

The loss of younger, wealthier retirees, coupled with their return when they are older and need more help, is “a double whammy for Northern states,” Rork said.

Even if older retirees do have money, their declining health may motivate them to move.

Patrick Beagle, a financial adviser in Springfield, Virginia, said he has an 84-year-old client who retired to North Carolina from New Jersey decades ago. But her husband has since died, and as her health begins to fail, she’s considering a move home.

“Financially she’s fine, but the nearest support is hours away,” Beagle said. “She’s planning a move next spring to be near her daughter.”

If so, she would join about 570 older people who moved from North Carolina to New Jersey in recent years.

'A Social Factor at Work'

The rise in the number of older people moving back to the Snow Belt likely is driven as much by personal and family reasons as anything, some researchers say.

“There’s a social factor at work,” said James Wooster, New Jersey’s chief economist. “They may move to Florida for economic reasons and then find that they really do miss their old friends and their grandchildren.”

Mimi Goodman, in her late 60s, said it’s friendship that makes her and her husband, 70-year-old Jerry, want to move back to New York from their apartment on the west coast of Florida. They’re on a six-week house-hunting trip in the Bronx, where she grew up.

“The decision to move to Florida was a financial one. It seemed like it would be affordable, but we didn’t like it,” she said. “In New York we had really deep connections to friends, the theater and political activism. In Florida, I felt completely cut off. I was surprised at how powerfully that affected me.”

The Goodmans’ children have moved away from the New York area, but many retirees who are making second moves are doing so to be near adult children.

“Persons over 70 relocate to be closer to adult children in a significant share of cases,” said Elwood Carlson, a demographer who specializes in retirement migration at Florida State University.

It’s often easier for grandma or grandpa to make the move to reunite the family than it is for their grown children to join them, Carlson said, especially if the seniors are living in an age-restricted community.

And if personal reasons are driving the rise in moves to the North, then some of the seniors — especially those who want to leave Arizona and Florida — are more able now to afford it.

Housing prices in the Sun Belt, which were especially hard-hit during the collapse of the housing market and even after the recession, have rebounded, making it easier to sell homes and get some money out of them so retirees can pack up and leave.

Bill Ness, who runs a website for people seeking retirement communities, said that as housing prices in Arizona and Florida have picked up, so has people’s interest in returning to where they grew up, raised families or still have family.

More retirement communities have been springing up in New Jersey and Illinois in response to growing demand from people who are moving back from the Sun Belt, he said.

“People are finally able to say, ‘Hey, I can finally sell my house for what I paid for it and move.’ ” Ness said. “At the end of the day, it’s mostly about being closer to family.”