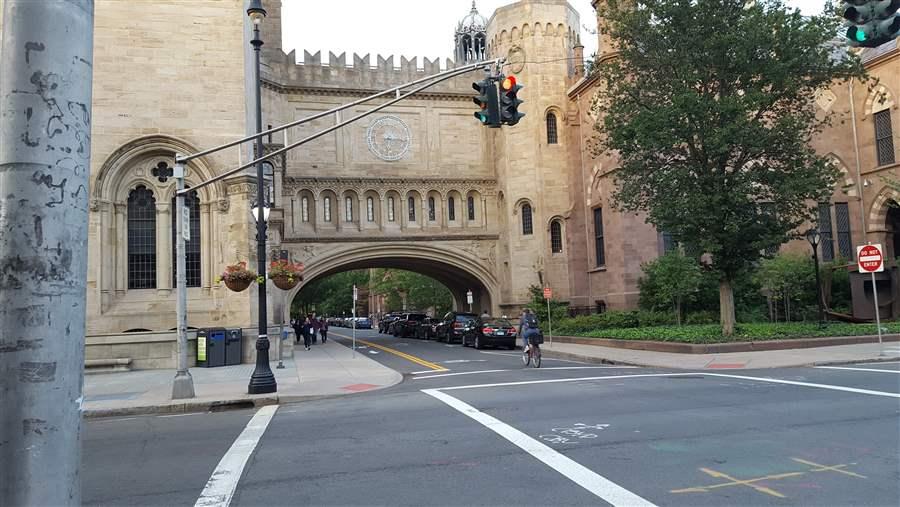 A New Haven city street leads to the Yale campus. Some states and cities are considering a property tax on nonprofits like Yale and other universities.

NEW HAVEN, Conn. — When New Haven Mayor Toni Harp gazes out her office windows, she can see across the street to Yale University’s idyllic buildings and grounds — none of which are on her city’s property tax rolls.

Yale, a nonprofit despite its $25 billion endowment and sprawling property (it owns about half the land in the city, Harp says), doesn’t pay property taxes. And some officials in Connecticut, including Harp, would like to see that change.

They aren’t alone. City and state officials in other parts of the country, including Maine, Massachusetts and New Jersey, also are questioning whether they can continue to allow wealthy schools like Yale, or big nonprofit hospitals, to remain off tax rolls while they scramble for money to pay for police, fire, streets and other infrastructure and services.

In some cases, they are looking for ways of taxing what until now have been tax-exempt sacred cows.

“They do some wonderful things for our community,” Harp said of Yale. “They have a world class art gallery, they have the fourth-oldest symphony in the United States … they have a scholarship program for [city] high school seniors. They do a lot, but we still have to run a city.”

New Haven and Connecticut are in difficult financial straits this year. And that’s why the tax-exempt status of Yale, the nation’s third-oldest university, with the nation’s second-largest college endowment, is under greater scrutiny.

The state’s most recent budget had a deficit of $960 million, prompting wide cuts in spending, including cuts in payments to localities like New Haven, which got $8 million less than it expected.

“What is the purpose of a tax exemption, for public policy purposes, if that exemption is not generating something that is a net positive to the public?” said Connecticut state Rep. Roland Lemar, a Democratic vice chairman of the House budget committee.

Lemar sponsored bills this year that would have taxed returns on the Ivy League school’s endowment, or portions of university property used for commercial research or other business-related operations. The bills didn’t pass. But legislators agreed to create a task force to study taxing the university.

David Thompson, vice president of public policy at the National Council of Nonprofits, chalks up the growing movement in Connecticut and other parts of the country to tax nonprofits to tight city and state budgets.

“The recession never ended” in some places, he said. “States still have budget shortfalls. The states are cutting what they pay down to cities. Cities have shrinking tax bases. So they ask, ‘How do we expand our tax base?’ ”

But that question often ignores the social services that nonprofits provide and the other good they do in the community, which governments don’t have to pay for, Thompson said. “People who only look at the budget see nonprofits as a cost item.”

Yale and New Haven businessmen fought Lemar’s proposals, particularly a taxation bill that, they said, would have stifled academic research that later leads to commercial applications.

“Taxing Yale’s academic property won’t help us get there. It could discourage donors from giving to Yale if they learn that academic laboratories could be taxed,” said Yale President Peter Salovey. The bill, he said, “also sends a bad signal to investors and other partners necessary for New Haven to prosper more.”

Salovey said New Haven stands out as a Connecticut city that has added jobs and residents, growing its tax base, in the last decade. Most of Connecticut has had flat growth in both population and jobs during that time.

Yale and many other large nonprofits often don’t get off scot-free. Many make what is called a payment in lieu of taxes, or PILOT, to acknowledge the services that cities and states provide. Yale makes an annual $8 million PILOT to the city.

That’s nice to have, Harp said, but the problem is the payment is voluntary and comes when the university sends it, not necessarily when the city’s bills are due.

“It’s not enough,” she said, “and certainly wouldn’t be what we would get if we taxed that property.”

Yale’s payment didn’t arrive this year at the anticipated date, she said, due to a minor political spat, and that “created a problem in our budget.”

“I was really worried that we were not going to get the payment,” Harp said. “That’s the problem with it being voluntary.”

New Haven isn’t the only city, and Connecticut isn’t the only state, where the issue of tax exemption and of the PILOTs that schools make has led to growing concerns.

In Massachusetts, for instance, Boston reported collecting $15.3 million less than the $47.4 million it had requested in PILOTs from tax exempt institutions for the most recent fiscal year.

Among the nonprofits that contributed less than requested were Boston College, Boston University and Harvard University, sparking disappointment and criticism from city leaders.

But Jim Klocke, CEO of the Massachusetts Nonprofits Network, said those numbers don’t take into account the in-kind contributions, such as college scholarships or free hospital care, that nonprofits provide communities.

“Some institutions’ community benefits are eight to 10 times larger than the requested cash amount,” he said.

The Massachusetts Legislature saw several bills on taxing nonprofits during its recently completed session. One would have imposed a new tax on property being bought by the Lowell branch of the University of Massachusetts, thereby adding to the city’s property tax revenue.

The bill died in conference committee. But since then, the city and the university have reached agreement on some payments from the university to the city, including $3 million for bridge repairs and $1.6 million for fixes to a parking garage.

The bill’s sponsor, Democratic state Rep. David Nangle of Lowell, doubts that the payments are the final word on nonprofits’ tax-exempt status in the state. Proponents of the bill expect it to resurface in the Legislature.

The Rhode Island Legislature this year considered a measure that would have let local governments tax a nonprofit up to 50 percent of what its property tax bill would be if it was a commercial enterprise, before rejecting it.

In New Jersey, Republican Gov. Chris Christie rejected a bill this year that would have required all nonprofit hospitals in the state to pay fees for the first time, to help cover the costs of police and other local services.

The bill was a response to a landmark tax court ruling last year, which found Morristown Medical Center operated largely as a for-profit hospital, making it subject to property taxes. The two sides settled on an agreement that requires the hospital’s owner to pay the town $15.5 million over the next 10 years.

In Princeton, New Jersey, a handful of neighbors of the prestigious university that shares the municipality’s name filed suit in 2011, claiming that they were paying more property taxes than they should, partly because Princeton doesn’t.

Behind the issue: New Jersey has the highest property taxes in the nation, and Princeton some of the highest in New Jersey. Princeton, whose endowment is $23 billion, provides benefits to the municipality, just as Yale does, including free events and transportation.

The university agreed in 2014 to make a $2.8 million PILOT to the municipality, and to increase the payment by 4 percent annually through 2020.

Jim Firestone, a semi-retired real estate agent in Princeton who helped spark the suit, said it is not fair that his neighbors pay such high taxes while the university gets by with relatively little.

Firestone doesn’t buy the argument that the in-kind contributions the university provides the municipality offset the lack of taxes.

“Every other person who’s a citizen of our town does that” through volunteering, he said. “Who do they think they are? Albert Einstein did work at Princeton University and look what he brought to the town. He shouldn’t pay taxes?”

Einstein lived in Princeton from 1935, two years after he emigrated to the U.S. from Germany, until his death in 1955.

The Yale Political Union, a debating society, took up the issue in scholarly fashion last week with a debate called “Resolved: Tax Yale.” The featured guest speaker was Mark Schneider, vice president at the American Institutes for Research, a social science think tank.

Schneider, who has studied the tax exempt status of universities, has concluded that the tax break afforded rich universities does not benefit taxpayers or help low-income students.

“Yale’s tax exemption is not an act of God,” Schneider said. “It is an act of legislation. And it can have only one justification: to advance the public welfare.”

He pointed to Harvard’s nation-leading endowment of $36 billion, and noted that dozens of university endowments exceed $1 billion.

The gifts donors make to the endowments are deductible from their income taxes, Schneider said. And the investment income earned by the endowments is tax-free. As a result, he said, “the public subsidizes these universities.”

“Are these mega-endowments really serving the public good?” Schneider said.

The Political Union invited a university administrator to the debate to counter Schneider’s comments, but Yale spokesman Tom Conroy said the administration was unable to send someone. So it was left to several students to disagree with Schneider.

One of them, Thomas Gould, a sophomore from Poughkeepsie, New York, majoring in math and philosophy, said Yale does a good job of taking care of the city.

“Yale does more for New Haven than New Haven does for New Haven, as a government,” he said to a chorus of hisses on one side of the room and to noisy applause on the other.