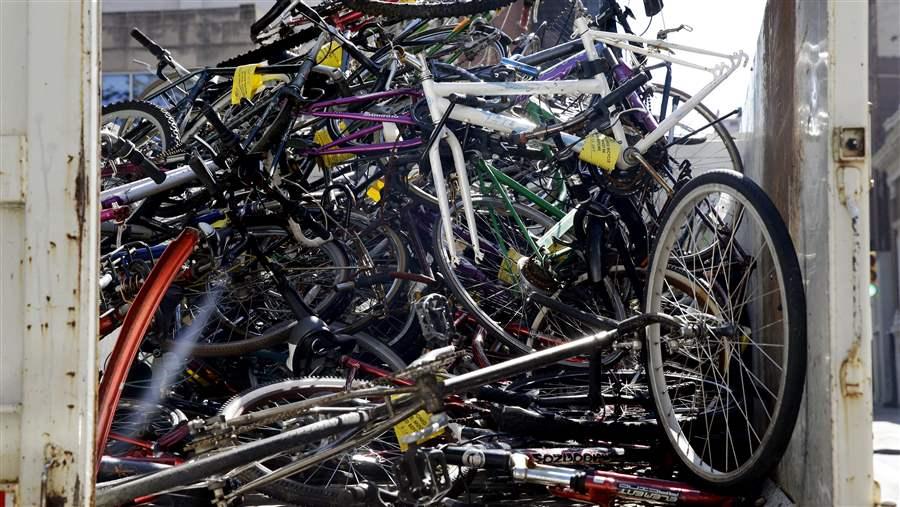 Some cities are turning an eyesore into money by taking abandoned bikes and auctioning them off, while others are giving them to nonprofits that refurbish them. Above, a pile of abandoned bicycles in a cleanup truck in Philadelphia.

Ever wonder what happens to all those battered bicycles chained to street poles or abandoned on bike racks, with rusting pedals, bent frames and missing tires or handlebars?

It depends on the city.

In Denver, they’re sold at auction.

And in Chicago, they’re handed off to a nonprofit that donates many of them to developing countries where people may have no transportation.

Across the country, there’s been a biking boom. Tens of millions of Americans ride bikes, for recreation, or to run errands or go to social events. And a growing number of people in many cities are riding their bikes to work.

But that increase has been accompanied by what bicycling enthusiasts, and city officials, say is a growing number of abandoned two-wheelers, left behind on sidewalks, or other public places, for days, or even months.

The bikes can be an eyesore, especially if they have rusted chains and have been stripped of parts. They’re also a headache for riders, because they take away valuable bike rack space, which can be in short supply.

“There’s not enough good bike parking already in most places,” said Bill Nesper, vice president of the League of American Bicyclists, a national cycling advocacy group. “For people who are bicycling, it’s frustrating if the bike rack has an abandoned bike, or several of them, attached. There’s just no space.”

No one keeps nationwide data on the number of bikes abandoned in American cities. But each year, across the country, thousands are confiscated by city workers.

While cities have different approaches to dealing with the problem, most initially get involved after a complaint is called in, usually by a local resident or business owner. City workers or police go look at the bike and tag it with a warning notice, if it appears to be abandoned, which often means it is inoperable, damaged or missing essential parts. The owner usually is given time to get the bike, sometimes days, sometimes weeks.

If the bike is still sitting there, workers cut the lock with a bolt cutter, or some other device, and confiscate it.

In New York City, an owner has seven days to remove a bike after it’s been tagged. If not, it goes directly to a processing plant, where if it is 50 percent or more metal, it gets recycled. Those that aren’t are considered trash and go to the landfill.

The city has seized about 1,300 “derelict” bikes since 2010, according to Kathy Dawkins, a Department of Sanitation spokeswoman. Last year alone, it received 1,726 complaints about abandoned bikes, and sanitation workers ended up carting off 497.

Many other cities give owners a chance to claim their confiscated bikes. Some require a description of the bike and where it was last locked; others require identification and proof of ownership, such as a receipt or a registration or serial number. If the bike is unclaimed, they dispose of it.

In some cities, abandoned bikes get auctioned off. Denver police, for example, auction approximately 120 to 150 bikes every three months, about a third of which are abandoned, said Bart Malpass, a Denver police detective. (The others have been stolen or held by police for other reasons.)

If the bikes are in bad shape and not rideable, they’re put in groups of five or seven and sold as a lot, sometimes just frames or wheels. Auction proceeds go to the city’s general fund.

Other cities have found creative ways to give the beat-up bikes a new life.

In Indianapolis, police send them to Freewheelin’ Community Bikes, a nonprofit that teaches kids between 10 and 18 basic bike mechanic skills, problem-solving and leadership. At the end of the program, kids get a bike, a lock and a helmet.

In Wichita, Kansas, where abandoned bikes traditionally have been sold at auction, the city, since July, has allowed the police department’s homeless outreach team to claim them if they’ve been in storage for a month. Bike Walk Wichita, a nonprofit, reconditions them for free and the police team distributes them to chronically homeless people who have jobs and no transportation.

“Rather than selling a bike for 10 or 15 bucks at auction, these bikes go to people who really need them,” said Nate Schwiethale, a Wichita police officer.

Chicago has received 1,232 complaints about abandoned bikes, since June 2014, and workers tagged 781 of them, said Department of Transportation spokesman Michael Claffey. After a week or two, they are removed and held, for up to three months, in a warehouse. If they’re not claimed, they’re donated to Working Bikes, a nonprofit that rescues discarded bikes and redistributes them locally and globally.

Paul Fitzgerald, the nonprofit’s general manager, estimates about 60 percent of the 300 or so bikes it gets from the city, each year, ultimately can be refurbished, or used for parts. The group sends many of the bikes “as is” to El Salvador, Ghana and other countries, where they are repaired and then used by people who have no transportation. The parts that are not reusable are recycled as scrap metal.

Some of the abandoned bikes are restored by the group’s volunteers and staffers, and donated to Chicagoans in need.

“People in Chicago walk an inordinate distance to get to a shelter or a soup kitchen or a job,” Fitzgerald said. “Some children in developing countries are walking more than five miles to get to school. The difference a bike means for these individuals is huge.”

Why Abandon Your Bike?

There are many theories about why someone would leave a bike locked up on a city sidewalk for weeks or months, and never return to pick it up. But they’re just that — theories.

Nesper, of the cycling advocacy group, supposes some owners may decide to walk away from their bikes if the parts have been stolen.

“The person may say, ‘Forget it, it got stripped, and I’m not going to take the rest of it with me,’ ” he said. “It’s a puzzle, why people abandon them, and I don’t understand it, but it seems to be happening more and more.”

Many bikes left behind are old and battered, but sometimes, they’re newer and expensive. Police officers theorize that some bikes are abandoned after thieves steal them, ride them around for a while and keep them locked up, until they see a model they like better, which they then swipe.

Some in the biking world blame the phenomenon on a disposable society, in which people are used to dumping things that aren’t the newest and shiniest.

“They may have locked up their bike for a while and forgotten the combination, or it has a flat front tire, and they figure it’s a hassle and not worth dealing with,” said Tim Blumenthal, president of PeopleForBikes, an advocacy group supported by the bike industry. “People upgrade to a new phone all the time and don’t even think about it.”

On college campuses, thousands of bikes are left behind every summer when students return home. The schools often end up selling them at auction.

Whatever the reason bikes are being discarded, Blumenthal said, they deserve a second chance. That’s why community-based nonprofits are cropping up all over the country that rehab them and give them a new life.

“There’s a lot of potential,” he said. “All these bikes just need a little love and repair work.”