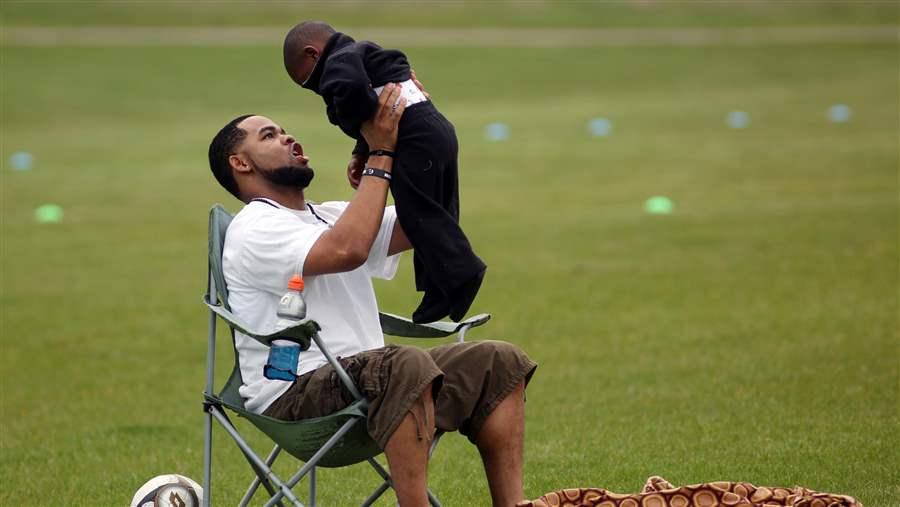 When an unmarried couple with children breaks up, it is often a matter of packing boxes, divvying up property, and maybe getting an order for child support from a local court.

Unlike a divorcing couple, their split is not typically guided by legal standards that dictate how much money they owe each other, or how much time they get to spend with their kids once they separate. And, particularly for unmarried fathers, that lack of legal oversight can mean a long fight for custody of their children.

States are starting to more closely examine custody arrangements for children born out of marriage, which have traditionally favored mothers, either by law or default, to give fathers a greater role in raising their children. Studies indicate that consistent paternal involvement can result in more child-support payments, and better mental health and academic results for the children.

In Nevada, for example, lawmakers last year extended the state’s custody and visitation laws to all children, regardless of whether their parents were married.

“There’s really no reason to think that children of separated, unmarried parents fare any differently than children whose parents were married at one time,” said Keith Pickard, a Nevada lawyer who wrote the law, which also requires all parents to split legal and physical custody of their children evenly, unless a judge says otherwise.

“This all needs to come under the umbrella of the best interests of the child,” Pickard said.

When a child is born to married parents, husbands are granted the same custody and decision-making rights as their wives, because states assume married fathers have an equal say in raising their children. But unmarried fathers typically must sign documents acknowledging their paternity and go to court to establish parenting rights. In at least 14 states, sole custody automatically goes to the mother when a child is born to unwed parents, according to the National Conference of State Legislatures (NCSL).

There were 1.6 million births out of wedlock in 2014, accounting for 40 percent of the births in the U.S. Closer scrutiny of custody arrangements for the children of parents who never marry, or who divorce, coincides with a national push, by fathers’ rights groups, to give fathers more custodial rights over their children, and a push to sort out custodial rights of gay couples.

Last year, Utah created an optional parent-time schedule for all former couples and North Carolina passed a law encouraging parents to share in the “rights and responsibilities” of raising their children.

This year, legislation was introduced in at least 15 states that required or created a preference for equally shared parenting or joint custody, according to NCSL. The only bill that passed a state legislature so far, a Florida proposal to create a preference for equal time sharing between parents, was vetoed by Republican Gov. Rick Scott.

And last month, New York’s highest court ruled, in Brooke v. Elizabeth A., that a person can seek custody of a child they are not related to if they can prove they and their ex-partner had intended to raise the child together.

Advocates of giving fathers more time with their kids say the proposals would make proceedings more equitable in a judicial system that favors mothers and can harm children by denying them equal access to both of their biological parents. And some research suggests that splitting custody equally reduces conflict between parents and allows children to form stronger bonds with each parent.

But others, like National Organization for Women president Terry O’Neill, are glad these bills are meeting opposition. O’Neill said laws like Nevada’s put parents’ interests ahead of children’s and risk the safety of domestic violence victims, who would be forced to interact with their abusers.

“It forces the abused spouse to use up what little resources she has to go to court and try to convince a court that she has been abused,” she said.

Most separating couples can establish custody arrangements on their own terms, O’Neill said. And the few who can’t shouldn’t be forced into joint arrangements, because doing so might exacerbate abuse and domestic violence.

In supporting budget proposals from President Barack Obama, the U.S. Congress, in 2014, urged states to figure out ways to establish parenting time orders to give noncustodial parents more time with their children, a concept also supported by the federal Administration for Children and Families (ACF).

Federal law already requires states establish programs to collect child support from noncustodial parents. But few states integrate parenting time requirements into their existing child-support systems, despite ACF assertions that children who are involved with their fathers have fewer behavioral problems, are more emotionally secure and are less depressed.

The ACF is wrapping up experiments in five states — California, Florida, Indiana, Ohio and Oregon — to see whether states can successfully build in parenting time to child support orders.

Despite concerns over caseloads and whether agencies would be able to train employees to handle parenting time requests, the tests seem to have worked, said Michael Hayes, who manages child support programs at the ACF.

Tying child support to time with children also could increase the likelihood that child support actually gets paid. Studies of participants in state “access and visitation” programs show that noncustodial parents were more likely to pay their child support when they got more time with their kids.

“When the so-called absent parent is with his child, he can see that she’s got a hole in her sneaker and there’s snow on the ground,” said Ned Holstein, founder of the National Parents Organization, a nonprofit formerly known as Fathers and Families that promotes shared parenting.

Holstein said that tying parenting time to child support could be a boon for unmarried parents. Low-income parents, especially, may be unlikely to pursue a parenting time order, because they do not have money for additional court fees. They may also worry that going to court again could make them liable for support payments they can’t afford.

“What person, faced with that, is going to ever come back to court?” he said.

Texas automatically issues a parenting time order when a couple or parent applies for child support. The standard order, issued through the state’s attorney general’s office, splits time for all parents and has been in use since the 1980s. Parents can deviate from that if they agree on a different schedule, said Alicia Key, a former state deputy attorney general for child support.

A handful of other states, including Michigan, California and Minnesota, have programs or special courts dedicated to establishing paternity and assisting in establishing parenting time.

The advantage to Texas’ system is parents always have a schedule for sharing time with their children, Key said.

“If there’s any dispute, they can go back to that standard schedule,” she said. “That’s why it’s so agreeable to everybody.”