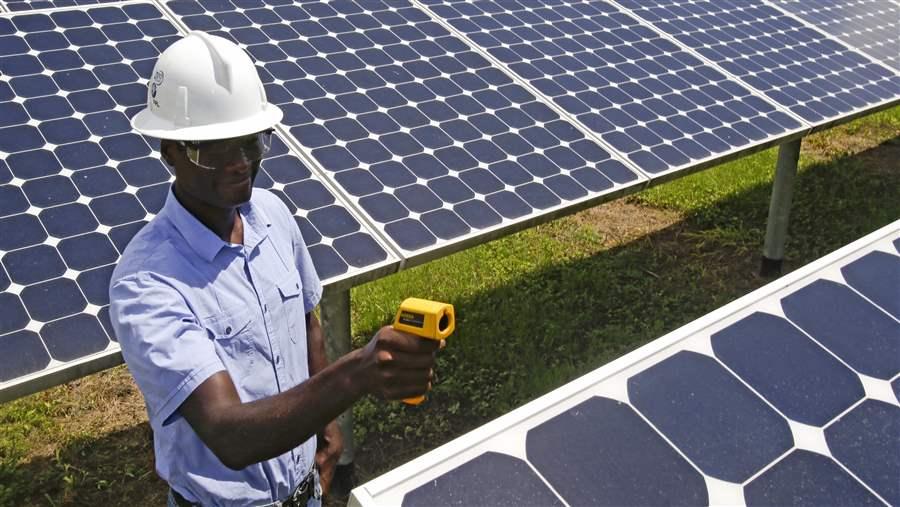 A solar energy ballot issue in the Sunshine State is attracting millions in contributions, reflecting a trend in many states. Above, an engineer checks panels at a solar farm in Florida.

In Florida, the competing sides on just one November ballot question — about controlling solar power production in the state — already have raised $23.65 million to try to sway the state’s voters.

That amount pales in comparison to the $313 million raised so far to influence the outcomes of referendums in California, which routinely leads the nation in the number of issues on the ballot and money raised and spent on them. But it’s strikingly more than what’s been spent in the Sunshine State in the past. And what’s happening in Florida is happening across the country.

State ballot campaigns this year are attracting millions of dollars from corporations, unions, wealthy individuals and special interest groups, as referendums increasingly replace legislatures as a battleground for people who want to make state policy, on issues ranging from legalizing marijuana and raising the minimum wage to gun control and drug pricing, and from tobacco taxes to solar energy and education.

So far this year, 165 statewide ballot measures, in 35 states, have been certified to go before voters. Of those, 74 were put on the ballot by citizens through signature petitions, rather than by state legislatures — the most since 2006.

About $379 million has been raised so far by campaigns for and against the measures, according to an Aug. 19 count by Ballotpedia, an independent research organization that tracks ballot issues. At that rate, the amount raised and spent on the measures this year “might break some sort of record,” said Josh Altic, Ballotpedia’s ballot measures project director. “There’s huge spending.”

A major reason: Unlike contributions to candidates, which are limited on the federal level and in many states, there’s no limit and little regulation on contributions to referendum campaigns, said Pete Quist, research director at the National Institute on Money in State Politics, which tracks campaign contributions at the state level. 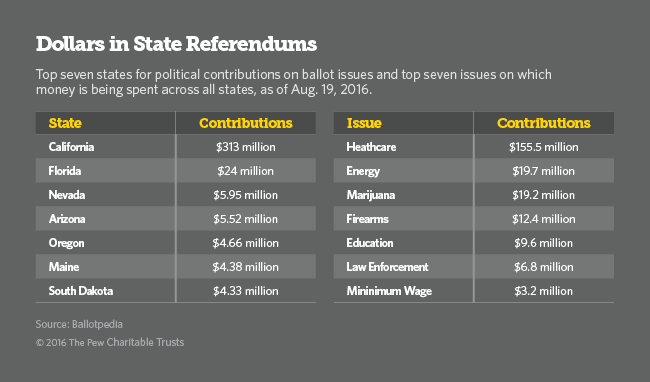 Behind California and Florida, $5.95 million has been raised so far, mostly to campaign for or against two Nevada referendums on guns and marijuana. On Arizona ballots, $5.52 million has been put together, mostly for marijuana legalization and minimum wage hike proposals.

Much of the money pouring in comes from businesses or other interests with financial stakes in the outcome.

In California, for example, a drug pricing initiative, which would require that state agencies pay no more than the U.S. Department of Veterans Affairs for prescription drugs, has attracted more than $96.14 million in spending.

More than $86.6 million of that total has come from the opposition, mostly drugmakers, who oppose the measure that would limit how much they get paid for their drugs.

Similarly, a proposed constitutional amendment that would increase taxes on tobacco has attracted more than $74.79 million. Opposition tobacco interests have raised twice as much, $55.95 million, as those advocating its passage.

Although California routinely leads the nation in dollars raised and spent to pass or kill ballot propositions, the trend of big-money ballot questions has spread to other states.

Florida, where $24 million and counting has been raised to influence five measures on the November ballot, is a prime example. Four years ago, in the last general election year, contributions for referendums were $13.57 million.

Most of the money in Florida this year is coming from utilities and energy companies in favor of a measure on solar energy generated by individuals. Its advocates have raised $21.52 million of the $23.65 million in contributions the measure has attracted.

The measure would place in the state’s constitution the right of Florida residents to own or lease solar energy equipment, and consumer protection regulations governing it.

But its foes, mostly environmentalists, say the right to own solar equipment already exists, and the proposed constitutional provision would crush less-regulated individual solar production.

The proposed amendment would not legalize, for example, third-party solar lease-ownership in which a solar company installs solar panels on your home, owns them, and then sells you the electricity they produce, presumably at a lower price than buying electricity from the local utility.

That method of generating solar electricity, legal in many other states, is opposed by the electrical utilities, which must continue to generate power and maintain power lines.

Sarah Bascom, spokeswoman for the utility-backed coalition advocating for the measure, said its foes are promoting a business and want it immune from consumer protection rules.

MacManus, the University of South Florida political scientist, said the campaigns for and against the solar measure and many other ballot initiatives now have all the political trappings of a gubernatorial, senatorial or presidential campaign: big money to spend on TV ads, political consultants and snappy campaign slogans.

“The [ballot] issues are now the candidates,” she said. And they provide “lifeblood for political consultants.”

The money is important, she said, because it costs $1 million to keep an ad up for a week in Florida’s 10 top media markets. And the consultants provide campaign strategy and marketing to appeal to voters — even if they obfuscate what’s at stake and who’s behind them.

In the instance of the proposed solar amendment, the advocates call themselves Consumers for Smart Solar. The opponents are Floridians for Solar Choice.

No state uses ballot measures as extensively as California, which had 1,216 statewide ballot propositions from 1910 through 2012. Seventeen questions are on the ballot this year, which helps explain why $313 million has been raised to affect them.

Most measures get on the ballot there by citizen initiative, (supporters submit petitions with the requisite number of signatures of registered voters), rather than by the Legislature referring an issue to voters to decide.

Voters can find out where the money is coming from, and look at the top 10 donors to each initiative on the California Secretary of State’s website.

Voters can see, for example, that San Francisco billionaire Tom Steyer and his group, NextGen Climate, gave at least $1 million to a ballot effort to hike cigarette taxes and $50,000 to a proposal to ban plastic bags.

Former Facebook president Sean Parker and his group, Californians for Sensible Reform, have contributed thousands to a gun-control measure in California and $1.8 million to support the legalization of recreational marijuana.

If there’s any national trend in ballot issues before state voters this year, it’s the minimum wage. It pits unions against business groups, both of which are putting money into campaigns.

Five states — Arizona, Colorado, Maine, South Dakota and Washington —have the issue on the ballot. All the proposals except the one in South Dakota would increase the state’s minimum wage. South Dakota’s measure would allow for a lower minimum wage to be paid to youths under age 18, dropping it from $8.50 to $7.50.

So far, $7.4 million has gone into both sides of the issue across the states, by Ballotpedia’s count. While not much compared to the big money involved in California ballot questions, it can go a long way in states like Maine and South Dakota, where media markets are far less expensive.

The campaigns on the issue crosses state lines. Ryan Johnson, executive director of the Fairness Project, a union-backed, liberal coalition supporting the wage increases, said his group is working in all four of the states where there are proposals to lift the wage.

“We help to support these campaigns with cash donations, services like website development, data, and targeting and programming on digital and television, as well as [direct] mail programs,” Johnson said.

The Fairness Project is the top donor to the Maine minimum wage hike campaign, contributing $213,000 as of July.