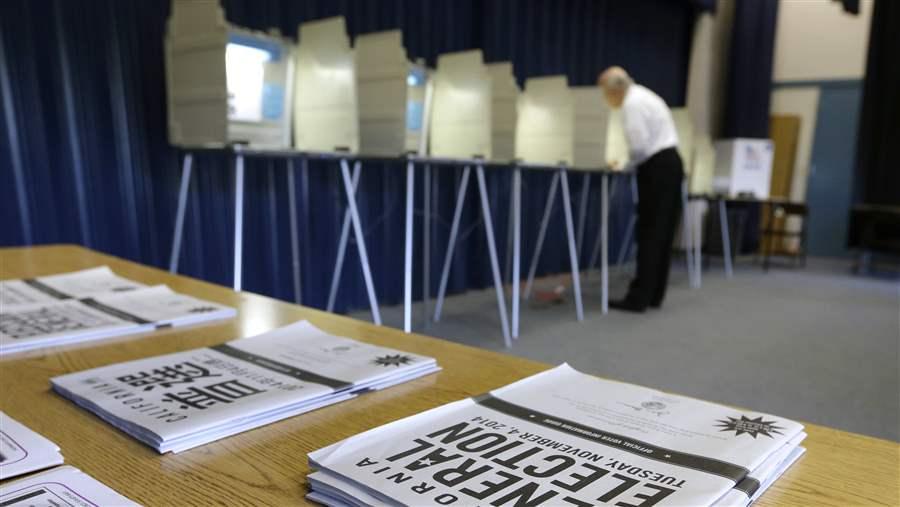 A voter marks his ballot in Elk Grove, California. Most states offer people the opportunity to register to vote when they apply for a driver’s license, but California and other states with automatic registration just go ahead and do it for them.

Editor's note: This story has an updated number of states with online voter registration.

At least 35 million Americans who are eligible to vote are shut out of the democratic process because they aren’t registered. Can tweaking a 21-year-old law add millions of them to the voter rolls?

That’s the idea behind “automatic registration,” which five states have adopted and two dozen others have considered in the last two years.

Jonathan Brater of the Brennan Center for Justice, a public policy institute at the New York University School of Law, said voter ID laws may get more attention, but getting more Americans registered to vote could have the biggest impact on elections.

“Registration is one of the biggest barriers to voting,” Brater said. “Every election, thousands of people go to the polls and can’t vote because of complications with registration.”

Under the federal Motor Voter Act, which went into effect in 1995, states must offer to register any eligible citizen who seeks a new driver’s license or public assistance. But in many states, the law hasn’t fulfilled its potential, in part because the process often trips up would-be applicants and many state workers don’t consider it a high priority.

States that have switched to automatic registration don’t just offer people the opportunity to register — they go ahead and do it for them whenever an eligible voter applies for a license, without requiring the potential voter or a DMV clerk to take any additional action. People can opt out of registration, but they don’t have to opt in.

“Motor voter was always the homework we didn’t want to do,” said state Rep. Chris Pearson of the Vermont Progressive Party, who sponsored the legislation there. “Motor voter was never the focus of people at the DMV. This in a way turns it on its head. This isn’t, ‘Oh, I need to remember to ask them if they want to register to vote.’ This is about updating our system to make it automated.”

In 2015, Oregon became the first state to make the change. Already, automatic registration has added more than 200,000 people to the voter rolls in that state, an increase of nearly 10 percent.

California, where about 7 million people are eligible to vote but not registered, also approved automatic registration last year. The state is still setting up its program, but the Public Policy Institute of California recently estimated that it could yield more than 2 million new voters, a potential increase of more than 10 percent. The think tank also predicts that automatic voter registration would diversify the electorate, making it more closely resemble the population of the state.

Lawmakers in Vermont and West Virginia approved automatic registration this year, and Connecticut adopted it administratively.

In states that don’t allow same-day registration, supporters of automatic registration say it will eliminate a common Election Day pitfall: people who arrive at the polls thinking they are registered, only to discover that they aren’t, or that they forgot to change their registration after a move.

But opponents, including Republican Gov. Chris Christie of New Jersey, who in August vetoed an automatic voter registration bill in his state, contend that connecting registration to driver’s licenses, which are available to people who are not U.S. citizens, opens the process to fraud. Inevitably, Christie argues, some people ineligible to vote will be registered by accident. Others say people who haven’t bothered to register are unlikely to show up at the polls.

In Oregon, the Department of Motor Vehicles automatically transfers an eligible voter’s name and address to the Secretary of State’s Office, where the registration process begins. The secretary of state then mails a form to each unregistered voter, which gives the recipient the option of registering as a member of a political party or opting out of registration. If the recipient does not respond, he or she is registered as a voter unaffiliated with any party.

Only 8 percent of those who received the mailing opted out of registration.

Brater said registering people gets them involved in the political process. Once they are registered, they receive reminders about upcoming elections and information from parties and candidates. In Oregon, nearly 20 percent of those who were automatically registered turned out for this year’s primaries.

Secretary of State Jeanne Atkins said she expects record-breaking participation in the general election in November. “Even if a smaller percentage of people who registered by this means participate than those who actively registered, there’s still more people voting,” she said.

Eventually, Atkins said, the new system will become the most common registration method for everybody in Oregon.

“This will be the basic way that newcomers to Oregon get registered, or when people move and get new licenses, this will be how they change their registration,” she said.

Republican Gov. Bruce Rauner of Illinois, who previously supported the idea, said the final measure was flawed because it relied on the State Board of Elections to screen out ineligible individuals, rather than the DMV, which collects citizenship information during the licensing process that the board may not have. Rauner also argued that people should have to attest to their eligibility at some point during the process, pointing to three cases of foreigners voting in the 2004 and 2006 elections after obtaining driver’s licenses.

But cases like the ones Rauner cited are rare. According to the Brennan Center, allegations of voter fraud are seldom substantiated.

“If done right, automatic voter registration increases election integrity because you’re only going to be registering people who have shown they’re eligible to another agency,” Brater said.

In Oregon, Atkins said, tying the process to the DMV triggers a more rigorous process than allowing people to register online. People seeking a license in Oregon must produce documents showing they are in the country legally, either as citizens or as legal immigrants. Only the data of those who prove citizenship and are old enough to be registered are forwarded to election officials.

Other states have changed their registration process outside of legislative action.

In Connecticut, automatic voter registration died in a House committee this year. But a U.S. Department of Justice threat to sue over the state DMV’s low voter registration rates led to an agreement last month between the Secretary of State’s Office and the DMV. The DMV now electronically prompts people to register, though they still have to attest on paper to being qualified to vote. In one month, the state registered more than 15,000 new voters and updated the addresses of more than 14,000 people who were already registered.

Officials in Vermont and West Virginia envision automatic voter registration processes that rely heavily on technology. They point to Delaware, where since 2009 visitors to the DMV have been prompted to register to vote on touch screens.

Delaware’s process isn’t considered automatic registration because people are simply asked whether or not they’d like to register to vote. If they do want to register, they choose their party and attest to being eligible. It’s cheaper than Oregon’s system, said Elaine Manlove, the state’s election commissioner, because it avoids extra mailings.

“They’re always presented with the choice, which in my way of thinking is better because they have the option to opt out right there,” Manlove said. “We get the declination, or we get the party and when they leave there they are finished. They get their card in the mail the next day.”