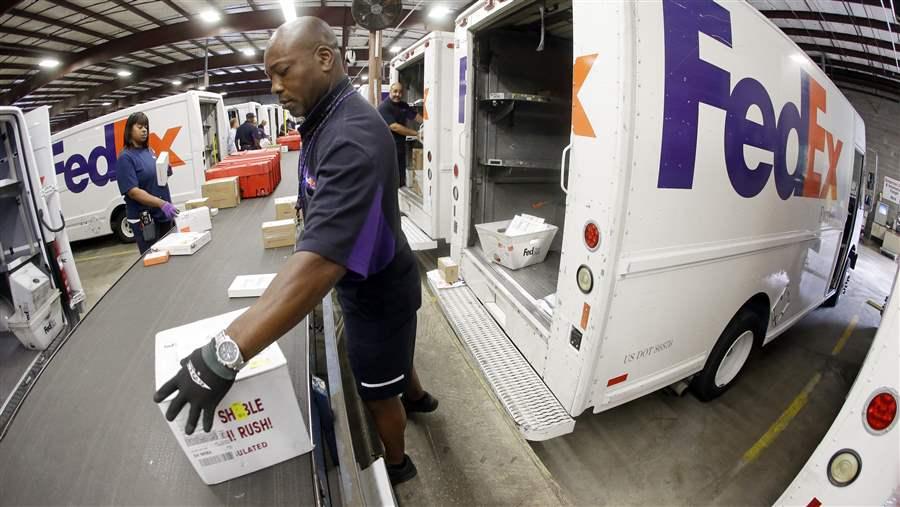 A FedEx worker loads packages into his delivery truck in Nashville, Tennessee. Tennessee had one of the largest increases in median income in 2015, and it was one of 49 states where income grew faster than gross domestic product.

The sharp gain in median household income last year, one of largest increases on record, may also signal a turning point in the decades-old disconnect between middle-class earnings and overall economic growth.

In 49 states, median income increased at a faster rate than per capita gross domestic product, according to a Stateline analysis of census data and figures from the U.S. Bureau of Economic Analysis. The one exception was New Jersey, which is feeling the effects of a slumping casino industry, declining interest in suburban office parks, and many communities’ slow recovery from Superstorm Sandy, in 2012.

Analysts across the ideological spectrum have noted the “great decoupling” between earnings and economic growth, which has existed nationally since the 1970s. The gap grew after the recession: Between 2009 and 2012, U.S. GDP grew by 4 percent, while inflation-adjusted median income fell by 4 percent. In 2010, the gap hit a single-year peak of 5 percentage points, as GDP grew 2.2 percent and income fell 2.8 percent.

“Economic abundance, as exemplified by GDP, has remained on an upward trajectory, but the income and job prospects for typical workers have faltered,” Erik Brynjolfsson of the MIT Sloan School of Management wrote last year.

Cumulative economic growth, as measured by the change in GDP, outpaced median income growth in every state from 2000 to 2014. Some states, in some years, bucked the trend, but 2015 marked the first time that median income had outpaced GDP in as many as 49 states, since state-by-state numbers became available, in the 1980s.

Lane Kenworthy, a University of California at San Diego economist who has studied the gap between income and GDP, said the one-year change was heartening but likely not the start of a new trend.

“It’s good news, to be sure,” Kenworthy said. “But I don’t see any sign that the deep-seated obstacles to shared prosperity have abated. So I’m not optimistic.”

In 2015, a tightening labor market gave workers more bargaining power and thus higher pay, Kenworthy said. But he predicted that deeper economic trends, such as the diminishing power of labor unions and the rise in new technology that could replace workers with machines, would continue to erode pay over the long term.

Mark Perry, a University of Michigan economist who is affiliated with the conservative American Enterprise Institute, agreed that it’s too soon to determine whether 2015 was “a change in direction or a one-time blip.”

Perry also pointed out that the median income measure may be misleading, because it doesn’t capture other forms of compensation, such as health insurance and stock options.

Montana and Tennessee had the largest increases in median household income in 2015, and in both states median income gains easily outpaced GDP growth.

William Fox, director of the University of Tennessee’s Boyd Center for Business and Economic Research, said his state had seen a tightening job market, as more people flock to Nashville, Knoxville and Memphis.

Much of Tennessee’s job growth has been in business and professional services, he said. Some companies, like Bridgestone, in Nashville, and FedEx, in Memphis, have expanded corporate operations in Tennessee over the past several years, attracted by a relatively low cost of living and the central locations.

Montana has benefited from wage growth in all industries, said Barbara Wagner, the state’s chief economist. Technology and research companies around Bozeman, home of Montana State University, are doing particularly well, she said.

At the other end of the spectrum, New Jersey’s median income increased less than half a percent in 2015, the lowest rate of any state, even as the state’s GDP increased by 2 percent.

Last year, New Jersey still had fewer jobs than it did before the recession, despite adding 69,200 of them. James Hughes, dean of the Edward J. Bloustein School of Planning and Public Policy at Rutgers University, said the state’s economy is still suffering from the effects of Superstorm Sandy, in 2012, and from the consolidation of the casino industry, in 2014.

Another factor, Hughes said, is that many businesses no longer want to be in suburban office parks, and New Jersey has plenty of them.

“The office growth is now in the 24/7 cities, like Manhattan, Boston and Washington, D.C., on the East Coast,” Hughes said. “That suburban stock is languishing. It used to be the driving force that made New Jersey a regional economic powerhouse.”

In some states, however, surging income growth in relation to GDP was not a sign of good times. In North Dakota, GDP declined by 4.4 percent, largely because of falling oil prices. But median income grew by 2.5 percent, creating a 6.8 point gap, the largest among the states. (The changes in GDP and in median income have been rounded.) Because of the way the U.S. Census Bureau asks about income, the North Dakota income data may reflect relatively high energy prices in late 2014.

When economic growth outpaces median income, it indicates that the fruits of prosperity are not being distributed widely, said Gary Burtless, an economist at the Brookings Institution.

“It might be that a lot of the extra income went to the top 1 percent or the top 20 percent, and the middle didn’t get as much of the gain. They didn’t get their fair share. That’s usually how it’s interpreted,” Burtless said.

Growing income inequality has spurred many cities and states to raise the minimum wage. But the largest planned increases are still being phased in and were unlikely to have had an effect on median income so soon, said Dean Baker, an economist at the left-leaning Center for Economic and Policy Research.

“The story of most states has been a modest shift back to wages, from profits, in the last couple of years,” Baker said. “The median [income] will be moved by more jobs per family, more hours per job and higher wages. All of those things were going the right way in 2015.”