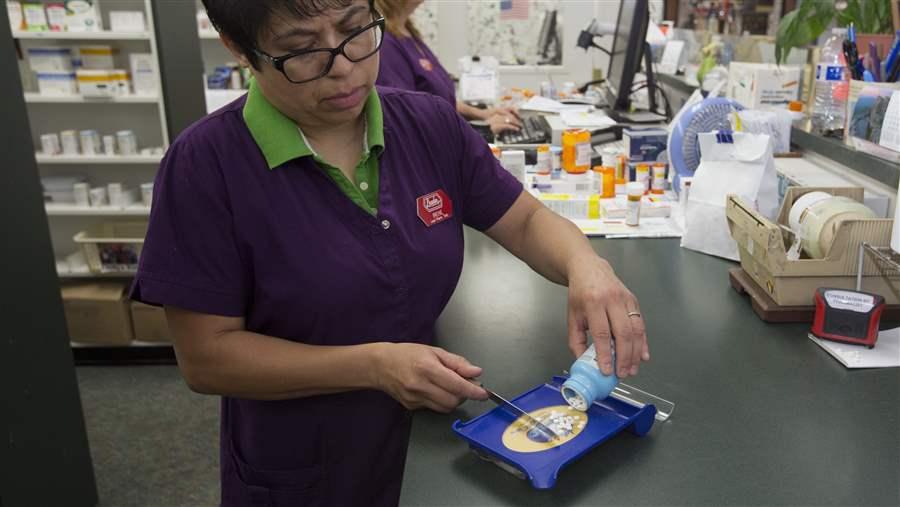 As drug prices continue to soar, Medicaid and other insurers are looking at tying prices to results. Above, a pharmacist technician fills a prescription in Sacramento, California.

Can states save money on increasingly expensive prescriptions for Medicaid patients by setting prices based not on drugmakers’ wishes, but on how well the medicines control, contain or cure disease?

The notion of tying drug payments to results, called “pay-for-performance pricing” or “value-based pricing,” already is being tested by some health insurance companies, some pharmaceutical companies and Medicare. And just last week, the Oregon Health & Science University announced it will undertake a large-scale research project to examine how states could apply the concept to Medicaid.

If states are able to adopt a workable performance- or value-based pricing system on drugs, they may be able to hold down spiraling Medicaid spending, said Matt Salo, executive director of the National Association of Medicaid Directors.

Medicaid, the federal-state health insurance plan for the poor, is staggering under escalating prescription drug prices just as patients and private insurers are, and the costs are straining state budgets. On average, roughly a quarter of a state’s budget goes to Medicaid spending.

Medicaid spending on prescription drugs for Medicaid recipients rose 24.3 percent between 2013 and 2014, in part owing to an increase in enrollment under the Affordable Care Act. That was nearly double the increase in total U.S. prescription drug spending in that same period, according to federal data.

And there’s every reason to think the increase in spending will continue as drugmakers prepare to introduce dozens more “specialty drugs,” high-priced, complex medications developed from living cells to treat chronic conditions such as hepatitis C, HIV, cancer, rheumatoid arthritis and multiple sclerosis.

Although they barely existed a decade ago, last year specialty drugs accounted for nearly a third of Medicaid spending, or about $16.9 billion.

Specialty drugs make up just 1.5 percent of claims, but they could play a big role in the rise of Medicaid spending on drugs.

Something has to give, said Jeff Myers, CEO of Medicaid Health Plans of America, the trade association representing Medicaid managed care plans. “A system in which the manufacturers are pricing to get the most money out of taxpayers isn’t workable,” he said.

Currently, Medicaid and federal health plans such as Medicare and the U.S. Department of Veterans Affairs are constrained in bargaining with manufacturers over drug prices.

But those prices are set by the manufacturers, and the manufacturers are not governed by any price ceilings, nor are the prices based on the drugs’ success, such as whether they control or cure a patient’s disease.

Pay-for-performance or value-based pricing would change that. It would tie payments for prescription drugs to their effectiveness, whether they did what they were designed to do.

The Pharmaceutical Research and Manufacturers of America, which represents biopharmaceutical research companies, did not respond to requests for comments about value-based pricing of prescription drugs.

The concept is being tried in other parts of health care. Under the Affordable Care Act, for example, hospitals face financial penalties if too many previously hospitalized patients are readmitted, a provision intended to encourage hospitals to provide better follow-up medical care.

Value-based pricing in drugs is the norm in many industrialized nations, including in most of Europe. Here, the pharmaceutical companies Novartis, Eli Lilly and Amgen are experimenting with value-based drug pricing for specific drugs.

Eli Lilly, for example, has agreed with the Harvard Pilgrim health plan to pay additional rebates if diabetes patients using its Trulicity medication do not achieve better lab results than patients using a competitor’s drug. The drugmaker will get a higher price if Trulicity’s results surpass others.

Medicare, the federal health plan for seniors, announced in July that it would test different models of tying the payment for certain drugs to their effectiveness.

This week, the Center for Evidence-based Policy, at Oregon Health & Science University, said that value-based drug pricing is feasible for Medicaid. The center is set to begin designing models that state Medicaid agencies would be able to adopt. However, a broad value-based system of drug pricing in Medicaid would require congressional action.

Evaluating the effectiveness of a drug will be essential to pricing under the concept.

One tool health plans could use for evaluating cancer drugs to establish a price has been developed by the Center for Health Policy and Outcomes at Memorial Sloan Kettering Cancer Center, in New York.

Called the “DrugAbacus,” the tool creates a price for cancer drugs based on how many years of additional life they provide, the severity of their side effects, the rarity of the disease and the novelty of their chemistry.

Peter Bach, director of the center and one of the creators of the DrugAbacus, acknowledges that there are many kinks to work out before a broad value-based drug pricing system could work in the United States.

For example, how do you determine the effectiveness of a drug in patients who take more than one? If a drug improves the condition of leukemia patients enough for them to have a costly bone marrow transplant, shouldn’t the drugmaker be rewarded despite the higher costs?

And unlike most of Europe, the U.S. doesn’t have a single-payer health system. Many Americans switch health insurance plans often. Because it may take months or years to determine the effectiveness of a drug for a patient, it could be hard to determine which health plan should be compensated by manufacturers for poorly performing drugs and which should pay the drugmaker for positive results.

But Bach is convinced these are problems that can be solved. Continuing the same system, he said, is what makes no sense.

“The question,” he said, “is how much can we tolerate a system that has no relation between price and benefit.”