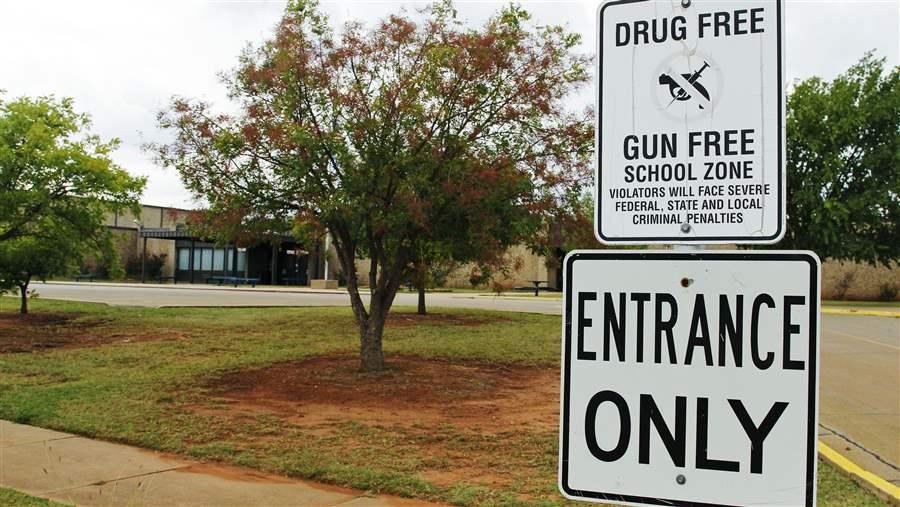 Drug-free zones are falling out of favor in some states that question their effectiveness, even as the opioid epidemic rages on. Above, a drug-free zone sign outside a school in Oklahoma.

In the late 1980s, every state and the District of Columbia had laws that imposed harsh penalties on drug offenses committed near schools.

The idea behind the “drug-free school zones” was to deter dealers at the height of a national crack cocaine epidemic from peddling drugs to children where they could be found most days.

Now those laws are undergoing new scrutiny, as states revisit long sentences for drug crimes that have led to mass incarceration and as they face a new drug epidemic, this time opioid addiction.

Some states, including Delaware, Indiana, Kentucky and Utah, are reducing the size of the drug-free zones as they seek to rid their prisons of so many nonviolent drug offenders with long sentences and as research indicates the zones sometimes fail to steer dealers away from schools.

But other states, such as Arkansas, Hawaii and Texas, are expanding the zones in response to the opioid crisis. They’re adding playgrounds, parks and other areas where children play and imposing heavy penalties for people caught with drugs there, sometimes even for small amounts.

The seemingly contradictory directions states are taking on drug-free zones points to the practical and political difficulties states are having. They’re trying to deter drug abuse, while also seeking to avoid packing prisons with people who receive extended sentences, often with no chance for parole, for being caught with drugs near schools.

From the start, school zone laws have varied dramatically from state to state. Some are more stringent than others, sometimes to the point of being ineffective.

The laws are crafted to exact enhanced penalties for drug offenses within the zones. Some state laws establish distinct crimes with their own drug-free-zone penalties. They are added on top of the penalties for the original crime, in effect charging the offender twice for the same crime.

Arkansas, for example, has one of the nation’s most stringent laws, according to the Sentencing Project, a research and advocacy organization.

Drug-free zones there include not only schools, including colleges and universities as well as school bus stops, but also public parks and skating rinks, YMCAs and community centers, public housing and treatment centers, and day care centers and churches.

Offenders convicted of possession, delivery, manufacture and sale of drugs within a zone are sentenced to an additional 10 years in prison with no chance of parole.

In Alabama, drug-free school zones, which include colleges and housing projects, extend 15,460 feet, roughly three miles — much more than in other states.

In some states, drug-free zones cover nearly an entire city.

Take Connecticut, where the drug-free zone extends 1,500 feet from the perimeter of school property and includes day care centers and public housing.

“You’re increasing the penalties for crime for an entire city,” said Aleks Kajstura, the author of the study. “You’re no longer steering people away from these specially protected zones. There’s nowhere for them to go.”

Research in Massachusetts indicates that when the zones are so extensive they aren’t effective in moving drugs away from children and can have unintended consequences, such as targeting minorities in densely packed urban neighborhoods.

Drug dealers tend to do business close to home and often live within these zones, according to the study, co-authored by Massachusetts Democratic state Sen. Will Brownsberger, a former narcotics prosecutor.

For example, in Tennessee, a small-time dealer in a city can end up doing much more prison time than, say, a meth manufacturer in the country, just on the basis of geography.

Eight Years for a Sugar Packet

The practical — and personal — effects the laws can have raise questions about their fairness.

For example, Rodgerick Griffin Jr. was standing on the porch of his ailing grandfather’s Chattanooga, Tennessee, house, in 2009, when the police rolled up. Relationships between residents and the police were none too friendly in this drug-infested neighborhood, so everyone on the street took off running. Griffin ran, too.

According to the police report, as Griffin ran, he threw down a baggie containing “a single, yellowish rock that appeared to be crack cocaine.” Another bag was found, totaling 2.6 grams of the substance, or less than 1/8 of an ounce, about the weight of a sugar packet. Police arrested him, and he was charged with intent to sell cocaine and possession with intent to deliver cocaine, a Class B felony.

But because the then-31-year-old was arrested within 1,000 feet of an elementary school, or roughly three city blocks, he was charged with a Class A felony instead and faced an automatic sentence of 15 to 60 years with no opportunity for parole. Had he been arrested in another neighborhood, he would have faced eight years in prison and been eligible for parole in less than three.

Griffin, who had no previous arrest record, pleaded guilty and was sentenced to eight years. He’s been in prison ever since, and must serve the full eight years.

“This has devastated us all. Emotionally, mentally, financially,” said Griffin’s aunt, Mary Patterson, a 57-year-old hospital administrative assistant. Griffin, she said, was the primary caretaker of the family’s elder relatives.

Tennessee has one of the more restrictive drug-free zone laws in the country. It includes preschools, day care centers, public libraries, recreational centers and parks.

Drug offenders like Griffin are subject to mandatory minimum sentences, even if they are caught driving past a school zone, even if school is out for the summer and it’s the middle of the night, said Nashville District Attorney General Glenn Funk. Most of his jurisdiction is a drug-free zone.

Funk ran for office in 2014 promising not to prosecute the school zone laws unless a child was endangered; he said that with mandatory sentencing, judges don’t have the discretion to alter the sentences to fit the circumstances, such as awarding probation to a nonviolent, first-time offender.

This means that a first-time offender with as little as a half-gram of cocaine with intent to sell would be punished at the same felony level as someone charged with second degree murder, except the murder convict would eventually be eligible for parole, Funk said.

Someone caught with the same amount outside of the zone would face eight to 30 years and be eligible for probation, he said.

About 500 people in Tennessee are serving time for drug-free zone violations.

Tennessee’s Senate minority leader, Lee Harris, a Democrat from Memphis, estimates that thousands more are just like Griffin: When faced with a stiff prison sentence, they plead guilty rather than take their chances with a jury.

In February, Harris introduced a bill that would have eliminated additional penalties for arrests outside of the school year. A similar bill failed to pass in the House. Harris said he plans to try again next legislative session.

“Our pie-in-the-sky idea is this crime should be just like any other crime and you should be eligible for parole,” Harris said.

Attempts to deal with school zone laws are often met with political or law enforcement resistance and contradictions in state capitols, even as lawmakers debate how they can reduce the world’s highest rate of incarceration by easing long prison sentences for nonviolent drug offenders who don’t pose a threat to children.

The laws are even tougher to deal with when roughly 2.5 million Americans are addicted to opioids and more than 28,000 people died of overdoses of painkillers or heroin in 2014, the highest toll ever.

In addition to Tennessee, lawmakers in Connecticut and New Jersey this year considered scaling back drug-free zones. At the same time, New Hampshire and Washington state considered increasing penalties. None of the proposals were passed.

Even if drug-free zones don’t make for good policy, “it’s very hard to get legislators to make reforms in the criminal justice system when it comes to reducing sentences,” said Michael Freeman, Hennepin County (Minnesota) Attorney and president-elect of the National District Attorneys Association.

“I can just see the campaign literature,” he said. “Votes to reduce penalties in elementary schools.” “Soft on drugs.”

While some law enforcement officials, such as Nashville District Attorney Funk, say the laws should be scrapped, others, such as Terry Ashe of the Tennessee Sheriffs’ Association, disagree.

The laws send a clear signal to drug dealers and should be kept, Ashe said.

“If you sell drugs in school zones, you’re going to get an enhanced penalty,’” he said. “I’m not so sure that throwing out the baby with the bathwater is the right thing to do.”