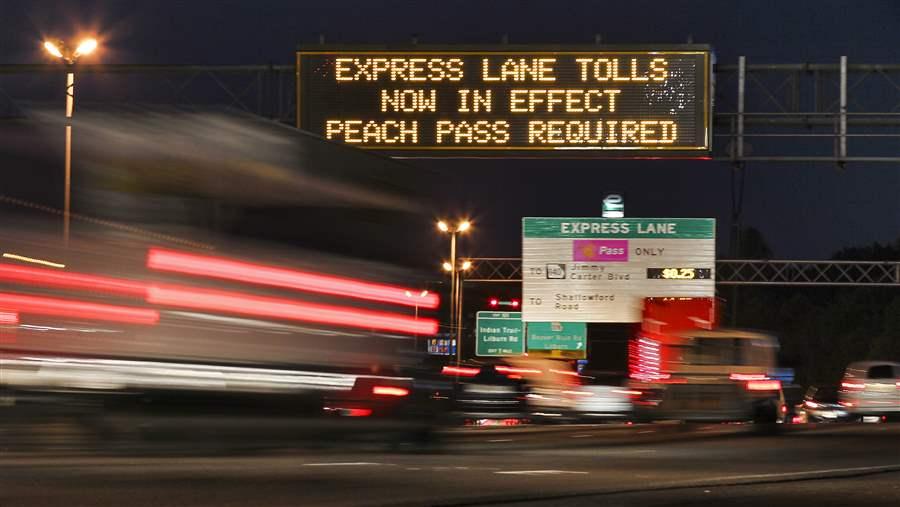 Atlanta is one of several cities that have converted carpool lanes into “high occupancy toll” express lanes that allow solo drivers to pay to use them. The lanes have been so popular with drivers that states are having trouble keeping them from getting congested.

This story has been updated to reflect new action in California to lift caps on hybrid vehicles in HOV lanes.

Highway express lanes provide a faster trip for carpoolers, people who drive low-emission cars, and solo travelers who are willing to pay more.

But as Americans drive more miles than ever before, express lanes are facing a challenge: they are too popular. So many drivers of all kinds are using the lanes that it is increasingly difficult for transportation officials to keep them speedy.

For solo drivers, the tolls in express lanes typically vary based on demand. In some places, drivers pay more during peak travel times, and in others prices go up as more cars enter the lane. Either way, the idea is to charge enough so that the lane is never overcrowded.

In South Florida, tolls have risen from $6 in 2009 to $10.50. But last year, during evening rush hour, Florida drivers going northbound on Interstate 95 only traveled faster than 45 mph — the federal standard for express lanes — 65 percent of the time.

Average speeds are now below 45 mph on nearly half of the San Francisco Bay Area’s carpool lanes.  As a result, drivers of electric vehicles who have a state-issued tag to drive on express lanes are now barred from some Bay Area lanes during peak congestion times, up to an hour each morning. Transportation officials say similar restrictions may be put in place on other Bay Area highways.

Meanwhile, California has struggled with a program that capped the number of hybrid vehicles allowed to ride on California’s HOV lanes for free. Legislators killed a bill that that would have raised the cap, but Democratic Gov. Jerry Brown later signed a measure that lifts the cap entirely until 2019, though the Department of Transportation will review the program’s effect on the lanes two years before it ends.

John Goodwin, of the Metropolitan Transportation Commission in San Francisco, said his agency opposed another increase in the number of hybrid vehicles allowed to use the express lane, because they were clogging it up for carpoolers.

“We do want people to use the HOT [high-occupancy toll] lanes, but there’s already ample encouragement to drive electric cars,” Goodwin said. “The idea behind free carpool access is to maximize groups of people on the road, not the number of vehicles on the road.”

In Los Angeles County, express lanes are restricted to carpoolers when the lanes get too congested, a feature common to many programs. In 2013, the express lanes on Interstate 110 switched into high-occupancy vehicle (HOV) mode for 1,983 minutes. The number tripled in 2014, to 6,336, and nearly doubled in 2015, to 11,476.

Kathy McCune, deputy director of Los Angeles County’s Metropolitan Transportation Authority, said the region’s express lanes are so congested it may become necessary to require hybrid and electric vehicles to pay at least a partial toll.

“If the lanes are congested, you’ve got to do something,” said Mark Burris, a researcher at the Texas A&M Transportation Institute. “You’ve got to raise the price or say we’re not going to have hybrid and low-emission vehicles.”

After a dip during the recession, Americans have returned to their cars in force: There were more cars on U.S. roads in 2015 than ever before. Americans lost nearly 7 billion hours to traffic delays last year — more than three times the amount lost in 1982, according to researchers at Texas A&M. During the same period, the amount of wasted fuel resulting from stalled traffic rose from 500 million to 3.1 billion gallons.

At the same time, the percentage of commuters who carpool has been falling since the U.S. Census Bureau began tracking numbers in 1980. Back then, 20 percent of commuters carpooled to work. The carpooling percentage declined to 13 percent in 1990 and 12 percent in 2000. Today it is only 9 percent.

The plunge occurred despite city and state efforts to encourage carpooling by introducing more high-occupancy lanes restricted to cars with two or more passengers. As those HOV lanes fell into disuse, more cities and states have transformed them into express lanes open to solo drivers of low-emission vehicles or those willing to pay for the privilege.

At least twenty cities, from Los Angeles and Houston to Miami and Washington, D.C., now have express lanes where tolls change based on demand or the time of day.

“They have a more consistent trip. It’s still congested, but they can predict their time better than in the regular lanes,” he said. “Even though they pay a price to use the lane, it tends to travel better than general-purpose lanes next to them.”

Only about 14 percent of express-lane travelers in Atlanta are carpoolers who use the lanes for free. Tomlinson now has his eyes on getting more people to use the buses that run in the express lanes.

Last year, Georgia experimented with allowing people to earn toll credits for riding the bus — up to $60 in six months — to save them money on the days they choose to drive. The state is considering expanding the program to more drivers if it can find the money for it.

The region also plans to add express lanes near “park and ride” lots. The idea is to make it easier for people to be express-lane bus passengers rather than car drivers.

“We recognize, in a congested metro area like Atlanta, having some segments of the population choose to use transit could make a big difference,” Tomlinson said.

What Are They Paying For?

As tolls have climbed around the country, researchers have noticed an interesting phenomenon: Rather than deterring drivers, as they are supposed to, higher prices tend to attract them.

David Levinson, a researcher at the University of Minnesota, said that when express tolls rise, many drivers take it as a sign that regular lanes are congested, rather than realizing that it means that the express lanes are especially crowded.

Levinson said people aren’t good at estimating how much time they’re saving by taking the express lane, and assume they are saving a lot because they are passing other cars. In fact, they may end up paying a high price for just a few minutes.

Even so, Levinson views the overwhelming popularity of express lanes as a positive development.

“If people are willingly paying lots of money voluntarily for this service it must be a valuable service,” he said. “That’s a success not a failure.”