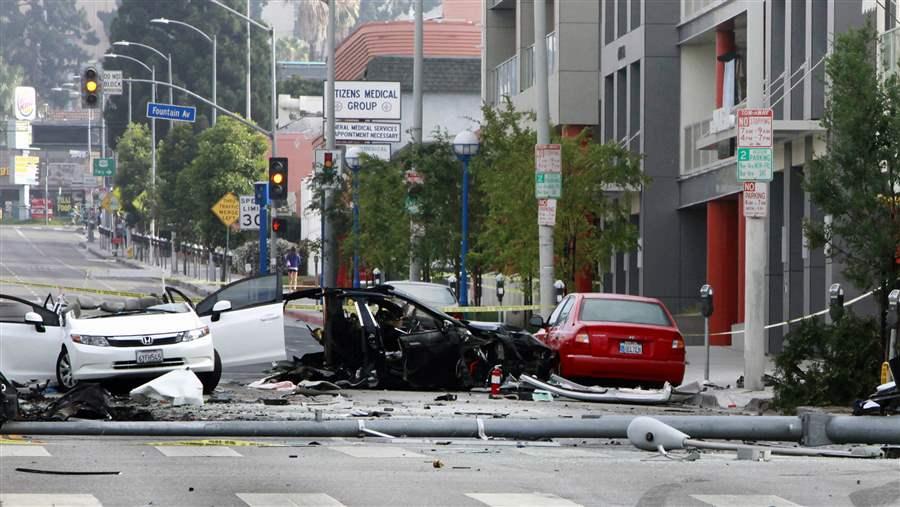 A car crash in West Hollywood, California. A dozen states still use no-fault auto insurance to cover the medical expenses of crash victims.

Michigan House members returned to work this week to decide whether they’ll give the state’s motorists a break on their highest-in-the-nation auto insurance premiums.

In doing so, they’ll decide whether to dilute the nation’s most stringent no-fault auto insurance law, which requires drivers purchase coverage that provides unlimited lifetime medical benefits, and continue a trend among states of altering or even scrapping their no-fault laws.

For many Michigan motorists — who pay on average $2,738 a year, more than double the national average — the decision would appear simple enough.

“Customers are saying it’s getting tougher and tougher to pay those premiums,” said Lori Conarton, a spokeswoman for the Insurance Institute of Michigan, which represents insurance companies.

But caught up in the Michigan debate is whether to also limit how much doctors and hospitals get reimbursed for injuries caused by car crashes and constrain payouts for people who abandon their jobs to care for an injured loved one.

Michigan is one of a dozen states still requiring no-fault insurance, which assumes each driver’s insurance company will cover the cost of treating injuries regardless of who caused the wreck. (Damage to vehicles and property are typically covered under the collision and comprehensive portions of insurance policies.)

The idea behind no-fault laws was that insurance companies would deliver faster payouts to crash victims and lower premiums in exchange for caps on damages and limits on consumers’ ability to sue.

By the mid-1970s, 16 states had embraced the idea. But the benefits promised didn’t come to fruition everywhere. By the early 1990s, insurance premiums had increased, drivers were suing their insurers over coverage benefits, and fraud had become rampant. Some states found themselves in the position Michigan is in now. They altered their no-fault laws or dropped them.

It’s a situation that Florida lawmakers also find themselves in. They’ve looked at a proposal to scrap their no-fault law. In New Jersey, lawmakers have expanded caps on reimbursement rates for certain medical procedures. Both states have no-fault laws and are among the 10 states with the highest auto insurance premiums.

Michigan’s highest-in-the-nation premiums can be attributed to the requirement of providing unlimited lifetime medical benefits and care, which no other no-fault state has, Conarton said.

Her group estimates premiums could be cut by as much as 45 percent if House members agree to a bill, which the Senate has passed, that would limit how much insurers have to pay for specific medical procedures and allow drivers to choose the amount of medical coverage they get.

The proposed changes Michigan House members are considering also are aimed at cutting down on fraud, in which unscrupulous doctors or other health care providers collaborate with drivers to fake crashes or embellish medical claims from real crashes to collect insurance payouts.

Without a requirement to prove fault, scammers can easily trick the system into an illegitimate payout, which also leads to higher premiums for law-abiding drivers. The proposal would create a fund to pay for investigators and prosecutors dedicated to chasing down auto insurance fraud cases.

“Insurance companies know that there is fraud going on,” Conarton said. “But when they take it to a prosecutor or investigators, their resources are limited. They’re working on cases that involve murder and assault … and don’t always have the time or the knowledge of insurance fraud to pursue those cases.”

Florida has been plagued by a string of auto insurance fraud cases over several years. One scam led to $1.5 million in questionable insurance payouts to a Florida chiropractor.

But fraud is only part of the problem in Florida, said Republican state Sen. Jeff Brandes, who proposed that the state scrap its no-fault law and instead force drivers to carry coverage for property damage and bodily injury liability.

The current no-fault law, which has capped medical benefits at $10,000 since 1972, only provides “marginal” benefits to crash victims because medical claims for serious injuries can cost a lot more, Brandes said.

When his bill failed earlier this year, Brandes asked the state to study how premiums would change if the no-fault system doesn’t change and how proposals, like his bodily injury liability coverage requirement, could improve coverage.

The study also will analyze the effect of Florida’s 2012 reforms that required that crash victims seek treatment within 14 days and capped the medical payout at $2,500 for injuries not considered to be “emergency medical conditions.” The changes were designed to lower the cost of personal injury protection and limit fraud, though medical providers say it hindered their ability to get paid.

“We’ve been constantly reforming it since the ’70s, but I think there’s a general consensus that $10,000 of minimum coverage is not enough,” Brandes said. “As most other states have figured out, you can provide better, more comprehensive coverage.”

The idea of a no-fault insurance system originated with academics in the 1930s as a way to try to make sure medical benefits were paid quickly to crash victims and not clog the courts with small claims cases.

But while people injured in crashes benefited from quick payouts, no-fault laws also meant they largely gave up their right to sue negligent drivers and in a few cases saw a steep increase in insurance premiums.

Most states require that drivers purchase a minimum of liability insurance to cover damage to property and other people’s injuries if they cause a crash. Many drivers end up buying more coverage than is required.

When the National Association of Insurance Commissioners (NAIC) last analyzed no-fault auto insurance laws, 16 years ago, it concluded that it was unclear whether insurance programs that only require a minimum amount of bodily injury coverage and still allow drivers to sue over crashes are better than no-fault.

Wayne Goodwin, North Carolina’s insurance commissioner and head of the NAIC’s automobile insurance working group, said, “the fact that we have so many states that do not have no-fault is indicative of what’s working better.”

No-fault laws are not the only source of high auto insurance premiums, even in Michigan, said Michael Barry, a spokesman for the Insurance Information Institute, a nonprofit communications group supported by the insurance industry.

States with high premiums are often subject to other risks like natural disasters or congested roads, which up the chances that people will have a wreck.

“This drives the frequency and severity of automobile accidents,” he said of traffic congestion. “Just a lot of cars on the road, driving a lot of miles. Just a lot of people going to and from work.”

Josh Hovey, a spokesman for Michigan’s Coalition Protecting Auto No-Fault, a group of consumer organizations, patient advocates, health care providers and rehab facilities that wants to preserve the state’s no-fault law and lifetime benefit, points to other expenses, such as property and other liability coverage, that are driving insurance premiums.

Only a third of a driver’s premium goes to the no-fault coverage requirement, he said, and that amount of coverage is essential to guaranteeing people with major injuries can get the medical care and long-term rehabilitation they need.

“We have patients who have been paralyzed, who have received significant brain injury, and through the rehab that’s been provided, they’re able to in some cases recover to go back to some type of employment,” he said.

The proposal before the House would preserve Michigan’s lifetime medical benefit, but Hovey said it wouldn’t do enough to lower premium costs and would ultimately restrict the care that crash victims could receive at the hospital and at home.

Hovey’s group argues that the savings promised by proponents of the legislation would only amount to a few dollars each month. The proposal could also cost Michigan hospitals as much as $1.2 billion, Hovey said; and would significantly limit how much compensation family members receive when they have to abandon jobs to care for a disabled loved one.

But Conarton says the state needs to set limits, similar to those established for workers’ compensation cases, on how much insurance companies have to pay when someone is injured in an accident. Right now, she said, hospitals or doctors can charge as much as they want to treat someone for car crash injuries.