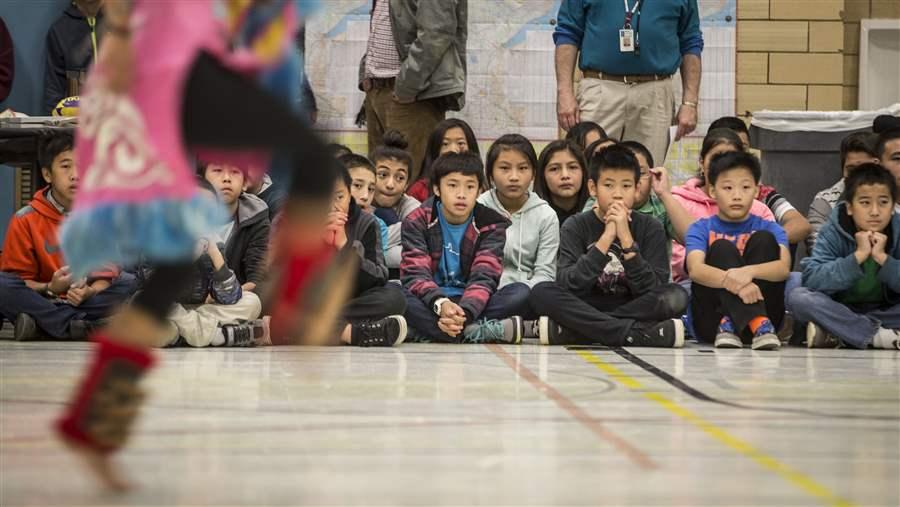 On the Spokane Indian Reservation, in eastern Washington, a group of about 40 public school teachers gathered last month, in a field of reeds that stretched as high as their heads.

Before harvesting the reeds, or tules, to make mats, they prayed. Later, they left tobacco as a gift. By learning the rituals of the Spokane tribe, the teachers of the Wellpinit School District hope to connect the culture to their lessons to get their students — almost all of whom are indigenous — to be more engaged.

In Washington and across the U.S., Native American students struggle more than any other student group to attend school consistently and graduate on time.

But this year more states — especially those with large Native American populations such as South Dakota and Washington — are trying to help by training teachers, working with tribes to create policies and programs, embedding culture in lessons, and giving more money to schools with many Native American students.

At the same time, a new federal law has incited conversation about how states and school districts should involve tribes in education.

The Every Student Succeeds Act, which last year replaced No Child Left Behind, places new requirements on all states and some school districts. For the first time, they must engage in “timely and meaningful consultation” with tribes when making annual plans. If they don’t, they could lose federal aid through programs such as Title I, for schools that serve mainly low-income families.

Separate from the federal efforts, Minnesota last year and South Dakota this year passed bills that increased funding for some schools with large Native American populations. The extra money will allow schools to update their curriculum with more references to indigenous culture and history.

Native American teens are more likely than teens from any other racial group to not be in school and not be working, according to a 2016 report.

The disparities start when the children are young: More than half of 3- and 4-year-old Native American children are not enrolled in preschool, the report found.

The report also outlines problems at home. Native American students are the most likely to have parents who lack secure employment. Thirty-six percent live in poverty, compared to the national average of 22 percent.

Students attending Wellpinit schools in Washington often don’t have internet at home or a reliable way of getting to school, educators say. They face domestic violence, homelessness and the loss of close family members.

Also, schools on or near reservations are run in many different ways, making it hard for students to get a consistent education, said Ahniwake Rose, executive director of the National Indian Education Association, a nonprofit that advocates for Native American, Alaskan Native and Native Hawaiian students.

The vast majority of indigenous students — about 93 percent — attend public schools, on or off reservations. The rest attend schools either run by the federal Bureau of Indian Education or run by a tribe.

All those schools are run differently, and yet a student could end up going back and forth between them, Rose said.

Some states are giving tribes more control over education and that will help, Rose said.

“We know if we are more engaged in our kids’ education, they are going to do better,” Rose said. “Just give us a seat at that table.”

New Mexico passed a law, in 2009, requiring all state agencies to collaborate with tribes when making policies and programs that affect Native Americans or Alaska Natives. The governor now meets with Indian nation, tribe and pueblo leaders once a year to talk through issues.

But many Native American students’ performance in school has since worsened. Reading, math and science test scores were mostly down from 2010 to 2014, according to a state report.

And the students still have the worst attendance and the lowest four-year graduation rate.

Part of the reason why Native American students struggle in school is that they are taught from a “white-privileged point-of-view,” said Washington state Democratic Sen. John McCoy, a member of the Tulalip tribe who supported the new law there that requires districts to add Native American culture to their curriculum.

“That has to stop,” he said. “We have to teach history, the good, bad and ugly, but it has to be taught correctly. By giving the true history, Native students in school can start feeling better about themselves.”

Strong Native American language and culture programs have been found to lower attrition, enhance student-teacher and school-community relations, and improve attendance and the rate of students who go to college, according to a 2011 report by Arizona State University.

Cultural programs can only go so far, however, as a 2003 study indicates.

Education sometimes isn’t valued highly enough on reservations in South Dakota, where 11.5 percent of students are Native Americans or Alaskan Natives, said Democratic state Sen. Troy Heinert, a member of the Rosebud Sioux tribe. He used to teach at a school on his reservation, and one of his sons still goes there.

Transportation is a big issue, he said. Some students have to take a bus more than 30 miles, one way, to get to school. If they miss the bus, they miss school.

The rural nature of the community means educators need to tailor lessons to what children know and understand, he said. Teachers shouldn’t use the example of a skyscraper to teach geometry, “when our kids have only seen them on the internet,” he said. “But we can use teepees. We have those here.”

South Dakota will try to improve outcomes for Native American students a few schools at a time. A law that passed this year provides $1.7 million for a specialist to work with up to three schools for three years to redesign their approaches to teaching, including embedding culture in the curriculum. The program is modeled after a public charter school in New Mexico.

Another law, passed this year, aims to improve teacher recruitment and retention for schools with large Native American populations. The state struggles with that in rural areas, because there’s not enough housing, too much crime and too much poverty, Heinert said.

Under the law, the state will pay the tuition and fees for “para-educators,” or teaching assistants, who go to college to become teachers. Many para-educators now live on reservations but don’t have the qualifications to teach, said Mato Standing High, the state’s director of Native American education.

Schools will use the money for whatever they see fit — from tweaks to the curriculum to supports for students to training for teachers.

In Washington, the Wellpinit teachers learning how to make tule mats were the first to participate in the new certification program at the University of Washington.

The teachers are learning how to better acknowledge their students’ culture in lessons, to help them connect to what they are taught, said Kim Ewing, principal of Wellpinit Elementary School.

Since storytelling is a Native tradition, a language arts teacher could have one student tell a story while another writes it down. A math teacher could teach students how to use algebra to count the tules in a field.

If the richness of the community can be applied in the classroom, Ewing said, “that makes a huge difference in learning.”