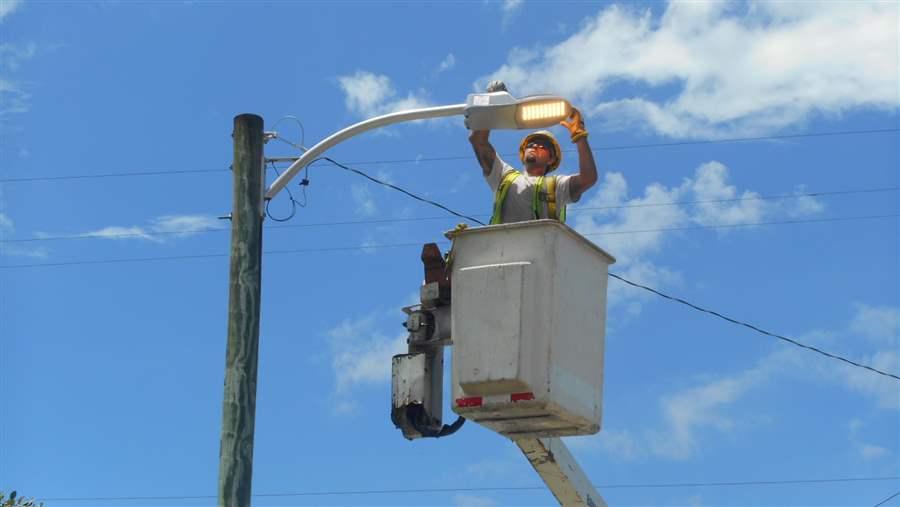 © City of Fort Worth

An electrical foreman installs a new 2700K LED streetlight in Lake Worth, Florida. Concerned about health risks, Lake Worth and some other cities have installed less-intense LED lights.

In the last several years, New York, Los Angeles, Houston, Seattle and other U.S. cities have installed high-intensity, white LED streetlights. In all, at least 13 percent of outdoor lighting is now LED, and many communities that haven’t yet made the switch are rushing to do so.

The LEDs are up to 50 percent more energy-efficient than the yellow-orange high-pressure sodium lights they replaced. They last for 15 to 20 years, instead of two to five. And unlike sodium lights, the LEDs spread illumination evenly, enhancing visibility for drivers and pedestrians.

But health concerns, heightened by a recent warning by the American Medical Association (AMA), are giving pause to some local officials, spurring them to consider less-intense LED alternatives. Honolulu, Phoenix and smaller cities in Arizona, California, Florida and Massachusetts are among those who are taking the health warnings seriously.

In June, the AMA warned that high-intensity LEDs (which stands for light-emitting diodes) emit unseen blue light that can disturb sleep rhythms. The full report from the AMA found that LEDs possibly increase the risk of serious health conditions, including cancer and cardiovascular disease. The AMA also cautioned that high-intensity LEDs can impair nighttime driving vision.

Honolulu, which was poised to install high-intensity LEDs, decided to hold off and consider other options. Phoenix is still deciding between a bright white LED model and one with a softer hue. It might opt for intense lights for major intersections and ballpark areas and a softer light for residential areas.

Lake Worth, Florida, spent 18 months debating and sampling different options before settling on lower-intensity LEDs with an amber glow.

“We found a color that made sense for the health of our city, and we’re proud of the choice we’ve made,” said Michael Bornstein, city manager of Lake Worth, which is in Palm Beach County.

But other cities say the health concerns are not convincing enough to override the benefits of the first-generation LEDs, which many of them installed within the past decade.

New York is one of them, although for residents who complain that lights on their block are too bright, the city has been “toning those lights down.”

Scott Thomsen, a spokesman for Seattle City Light, which is responsible for that city’s outside lights, dismissed the health concerns about the bright white LEDs, noting that they emit less of the problematic blue light than most computers and televisions.

“We have been able to reduce by half the light spread so it doesn’t go into people’s homes while increasing driver’s acuity and visibility,” Thomsen said.

A Harsh and Lurid Light?

The Department of Energy and the Environmental Protection Agency “put a lot of push into them,” said Michael Siminovitch, director of the California Lighting Technology Center at the University of California, Davis. “I call it a rush.”

But until last year, cities eager to make the switch to LED streetlights had limited options.

LEDs are measured by their color temperatures, which are expressed in “Kelvins” or “K.” The original LED streetlights were made with at least 4000K, which produces a bright white light with a high content of unseen blue light.

Cities that installed LED streetlights before the end of last year used 4000K lights or higher because those with lower Kelvin ratings either weren’t yet manufactured or hadn’t achieved the same energy-efficiency.

Now, however, LEDs with lower Kelvin ratings have roughly the same energy-efficiency as those with higher ratings. They don’t emit as much potentially harmful blue light and they produce a softer, amber hue.

When 4000K and 5000K LEDs were initially installed, they drew mixed responses. Police and traffic safety officials and many motorists liked them because they created a bright light that sharply illuminated the ground they covered.

But in many places, including New York City and Seattle, residents complained that the bright white light they emitted was harsh, even lurid. People described them as invasive, cold and unflattering.

Even before the AMA warning, some researchers raised health concerns. Some noted that exposure to the blue-rich LED outside lights might decrease the secretion of the hormone melatonin in humans. Melatonin, which is secreted at night, helps balance the reproductive, thyroid and adrenal hormones and regulates the body’s circadian rhythm of sleeping and waking.

“As a species, we weren’t designed to see light at night,” said UC Davis’ Siminovitch.

Meanwhile, the “dark sky” movement, which aims to reduce the level of “light pollution” humans cast into the night sky, criticizes LEDs as a major contributor to the problem.

In its warning, the AMA, which conducted a review of the scientific literature on LEDs, cited the melatonin issue, noting that studies have linked bright LEDs to reduced sleep time, poor sleep quality and impaired daytime functioning.

It referred to evidence that exposure to high-intensity light at night might increase the risk of cancer, diabetes, cardiovascular disease and obesity. And it cautioned that intense LEDs have been associated with “discomfort and disability glare” in motorists, meaning that they impair nighttime driving vision.

Finally, the AMA cautioned about the harmful effects of bright LEDs on wildlife, particularly nocturnal animals, birds and insects.

“These lights aren’t just bad for us,” said Mario Motta, one of the authors of the AMA report, “they’re bad for the environment, too.”

The AMA did commend LEDs for their energy-efficiency and effectiveness, but it urged cities to minimize blue-rich outside lighting and recommended the use of LEDs no higher than 3000K.

Tony Dorsey, a spokesman with the American Association of State Highway and Transportation Officials, said that the organization’s environmental committee is studying the AMA’s report, but that association members haven’t seemed concerned about the use of 4000K LEDs on their state roadways.

The Department of Energy said LEDs should be used with “prudence” but praised their overall performance. It said the AMA had added “another influential voice” to the issue.

Others, including the Lighting Research Center at Rensselaer Polytechnic Institute, said the lights pose less risk than the AMA suggests. The research center pointed out that the AMA report is based on extended exposure to high-intensity LEDs, and said the blue-light hazard of LEDs “is probably not a concern to the majority of the population in most lighting applications.”

Motta, co-author of the AMA report, stood by the group’s concerns about the health and environmental impact of LEDs that are 4000K and above, and said there is no downside — either in cost or efficiency — to choosing a lower-intensity light.

Some cities are satisfied with their higher-intensity LED streetlights.

In Seattle, which has installed about 41,000 new 4100K lights since 2010, Thomsen, the spokesman for Seattle Light, attributed the early complaints to residents’ surprise at the sharp difference in brightness between the old sodium lights and the new LEDs.

The new lights are comparable to moonlight and provide excellent visual acuity for drivers, Thomsen said. Police especially like them, he said, because unlike the old sodium lights, they enable people to distinguish colors at night. “The police say they get much better witness descriptions,” Thomsen said.

Thomsen also noted that even though the Seattle LEDs are 4100K, that is significantly less than most computer screens, laptops and televisions.

But Pete Strasser, technical director at the International Dark-Sky Association, said moonlight contains far less blue light than higher-Kelvin LED lights. As for other computers and television screens, he said, “Everyone knows it’s a bad thing for your sleep cycle to watch TV or work on your computer before going to bed.”

A little more than a year ago, Gloucester was on its way to replacing its old sodium streetlights with 2,800 new 4000K LEDs. But then city planner Matt Coogan began reading about health and environmental warnings. He also had residents sample the 4000K lights against 3000K models.

Next month, the city is expected to finish installing its LEDs, but they will be 3000K rather than 4000K.

Coogan knows the debate over the health risks of LEDs rages on. But he doesn’t want Gloucester, and its city planner, to risk being on the wrong side of history.

“I didn’t want to get 10 or 15 years down the road and find out we had exposed our people to a health risk,” Coogan said.