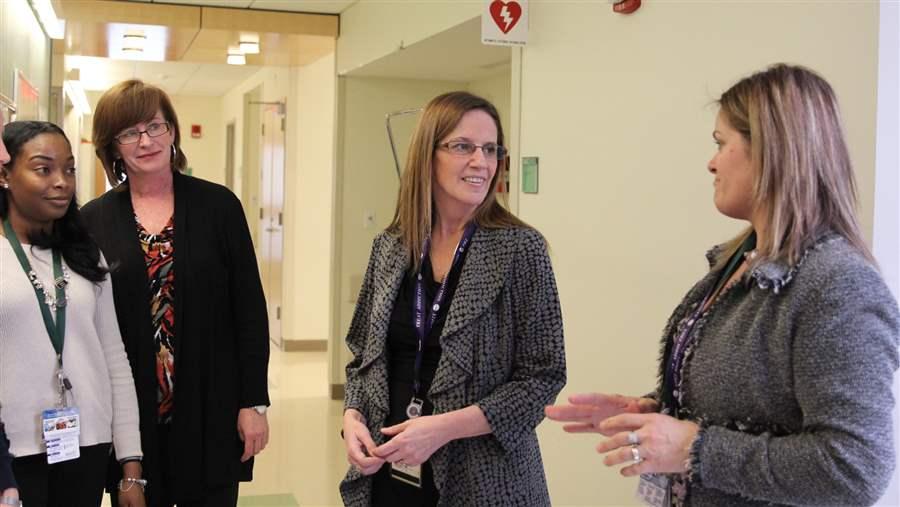 Colleen LaBelle (center), a registered nurse, talks to members of the opioid addiction team at the Boston Medical Center. States are eyeing the center’s nurse-managed approach to buprenorphine therapy as a way to treat more people.

BOSTON — As the opioid epidemic advances, public health officials nationwide are calling on doctors to help stanch overdose deaths and salvage shattered lives by prescribing medications that have proven highly effective at keeping people away from drugs.

So far, though, not enough doctors are signing up, and less than half of the 2.2 million people who need treatment for opioid addiction are receiving it, according to the U.S. Department of Health and Human Services (HHS).

A program developed at Boston Medical Center could change that.

Instead of doctors taking the lead, registered nurses have been managing the medical center’s opioid treatment programs, which have been using buprenorphine — a medication that eliminates withdrawal symptoms and reduces drug cravings — since 2003, when the federally approved addiction medication became available.

By taking over the labor-intensive office visits, behavioral health assessments, drug screenings and paperwork that go along with buprenorphine treatment, registered nurses make it easier for physicians to accept more patients and write prescriptions for the medication they want and need.

The Boston program was developed in collaboration with the Massachusetts Department of Public Health. And from its origins here in the city’s historic South End, it has been replicated in 30 other health centers across the state.

The U.S. Substance Abuse and Mental Health Services Administration recommends other states replicate Boston Medical’s model, and many are considering it.

Washington state recently adopted a similar nurse manager approach at two medical facilities in Seattle. And California, Connecticut, New York and Wisconsin are working with Colleen LaBelle, the founder of the Boston program, to create their own versions.

Once Boston Medical’s clinic was up and running, the state Bureau of Substance Abuse Services helped fund its expansion and worked with the state Medicaid program to develop reimbursement rates that would make the program pay for itself.

In the three years after Massachusetts began funding an expansion of the program, in 2007, the number of doctors in the state who signed up for federal permits to prescribe buprenorphine nearly quadrupled, according to a recent study.

With a support staff, busy primary care physicians were more willing to devote part of their time to treating people with addictions, LaBelle said.

Research shows that Medicaid-funded addiction treatment programs that use buprenorphine reduce overdose fatalities by half compared to treatment with no medications.

Another advantage of Massachusetts’ program and ones like it is patients can receive treatment for their addictions in doctors’ offices and health clinics where their other health needs can also be met, said Michael Botticelli, director of the Office of National Drug Control Policy.

“We must make sure that every American with an opioid-use disorder who wants treatment can get the help they need when they need it, and that includes integrating treatment into primary care settings,” he said.

Botticelli, who was appointed drug czar in 2015, directed Massachusetts’ substance abuse agency in 2003 when LaBelle first sought funding for the program and was instrumental in expanding it throughout the state.

Separately, an HHS ruling loosened a long-standing restriction on the number of patients a physician can treat with the opioid-based medication, increasing the limit from 100 patients to 275.

Earlier in the year, the administration awarded $94 million to community health centers and proposed $1.1 billion in the 2017 budget for medication-assisted opioid treatment.

What’s needed is more physicians and other health care providers who are willing to step up to prescribe the medications, she said.

More than 900,000 U.S. physicians can write prescriptions for painkillers such as OxyContin, Percocet and Vicodin. But only about 34,000 doctors are authorized to prescribe buprenorphine to people who become addicted to those and other opioids. Most only treat a handful of patients.

The biggest reason doctors give for not treating more patients is lack of support staff to assist with the numerous office visits and after-hours calls that typically go along with medication-assisted addiction treatment, said Dr. Kelly Clark, president-elect of the American Society of Addiction Medicine.

Doctors also complain they don’t have time to keep up with the extra paperwork, including insurance claims and pre-authorization requirements, referrals to mental and behavioral health services, and compliance with U.S. Drug Enforcement Administration rules, Clark said.

LaBelle’s nurse manager model removes those barriers and makes it possible for individual doctors to treat more patients. It also reduces the overall cost of treatment by minimizing the time spent by doctors, the highest-paid members on any medical team.

Research shows that addiction medications are at least twice as effective as abstinence and 12-step programs at keeping people in recovery and avoiding relapse for at least a year. Medications also lower the risk of a fatal overdose.

But until 2003, methadone was the only approved medication and it could only be taken under supervision at sparsely scattered clinics across the country.

When the National Institute on Drug Abuse funded the research that led to buprenorphine’s development, the hope was that office-based prescribing of buprenorphine would mean greater access to addiction medication nationwide.

Unlike methadone, patients taking buprenorphine don’t have to show up at a specialized clinic every morning to receive their daily dose. They can get a prescription from their family doctor, pick up a month’s supply at a local pharmacy, and take the medicine in the privacy of their homes.

Taken daily by mouth, buprenorphine is considered more effective at keeping people in recovery from drug addiction than treatment without medication.

But in spite of its positive results, buprenorphine remains underused, in part because of stigma against so-called maintenance mediations, including methadone, which was approved for opioid dependence in 1964.

Buprenorphine and methadone are themselves opioids, and critics say their use amounts to trading one addiction for another. Although regulated differently, both medications are considered controlled substances by the federal government because of their potential for diversion into illegal markets.

As a registered nurse, LaBelle can’t prescribe buprenorphine. But she and other nurses manage nearly every other aspect of its use.

When patients come to a clinic seeking help for their addictions, a nurse on the team checks their urine for opioids and other drugs, talks to them about their drug use, health and mental health history, and makes sure their insurance is up to date and covers the treatment.

A nurse explains how buprenorphine works and makes sure the patient isn’t taking benzodiazepines such as Valium or Xanax, which are dangerous when combined with buprenorphine. Nurses also set patients up with behavioral health counseling and group classes and refer them to mental health professionals when needed.

Doctors only enter the picture to prescribe the medication and approve the patient’s treatment plan. Over the course of each patient’s treatment, which typically includes monthly office visits and can last for years, doctors see patients only occasionally. Nurses are their main point of contact.

Nurses traditionally have done most of the work in treating other chronic diseases like diabetes, kidney disease and AIDS. LaBelle says getting people with opioid addictions started on buprenorphine, maintaining their treatment and coordinating their counseling is no different.