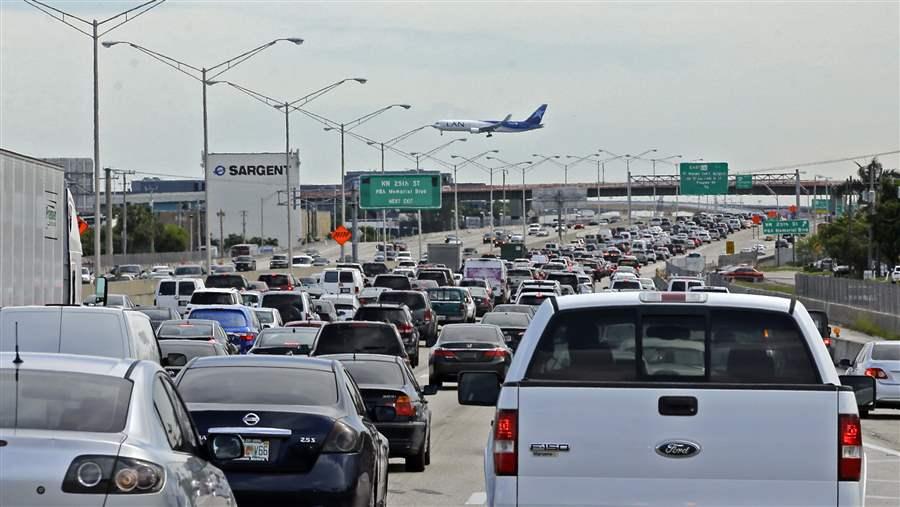 Congestion leads to a backup on the Palmetto Expressway in Miami. A decline in carpooling means more cars are on the road.

Carpooling is at a new low — just 9 percent of people share their ride to work with others, according to the U.S. Census Bureau. But carpooling services offered by popular internet ride-hailing services, such as Uber and Lyft, may have the potential to change that.

“Most efforts at increasing carpooling in the past have been on the public side of things,” said David Schrank, a Texas A&M researcher who studies traffic congestion. “Now, more so than ever, is the private sector getting involved. There’s potential for the private sector to expedite that process because they see income to be generated.”

If private ride-hailing services are successful in getting people to carpool in greater numbers, traffic congestion could be eased and greenhouse gas emissions could be reduced. But getting people into the habit of sharing rides — especially to and from work — could be a challenge. Recent trends are running against it.

The share of commuters who carpool has been falling since the Census Bureau began tracking numbers in 1980, despite city and state efforts to encourage carpooling by introducing more high-occupancy lanes that give preference to cars with two or more passengers. Twenty percent of commuters carpooled to work in 1980. That number plummeted to 13 percent in 1990. It has trailed off since 2000, from 12 to 9 percent.

Meanwhile, congestion has worsened. A record number of cars now are on the road. The number of hours Americans lose to traffic delays hit nearly 7 billion last year — more than three times the amount lost in 1982, according to researchers at the Texas A&M Transportation Institute. The amount of wasted fuel resulting from stalled traffic rose to 3.1 billion gallons from 500 million gallons in the same period.

Although greenhouse gas emissions had been dropping in the U.S. since 2005, they rose 1 percent from 2013 to 2014, the U.S. Environmental Protection Agency calculated.

Academics who have studied the decline in carpooling point to many reasons for it, including far-flung workplaces, busier lifestyles and even a recent drop in gas prices. But some say that the new mobile ride-hailing apps have the potential to provide the flexibility that can revive carpooling.

“Driving in your car alone is so inexpensive and convenient it’s not worth the hassle of an inflexible schedule,” said Paul Lewis with the Eno Center for Transportation, a nonprofit focused on mobility, safety and sustainability. “People aren’t just going to work and then going home.”

“On the flip side, new technology applications are starting to change that equilibrium. They’re making haphazard commutes easier by allowing you to schedule trips on the fly. That last-minute convenience is what consumers are demanding right now.”

The Gender Gap in Schlepping

The share of commuters driving alone to work is 76 percent, up from 64 percent in 1980 — the rate has remained about the same since 2000. And people are driving more miles. Americans drove 3 percent more in the first half of this year than the year before.

The change in the nature of work is a major reason behind this, said Alan Pisarski, an expert on commuting and the author of the “Commuting in America” report. “You just don’t have as many people working in manufacturing, with 3,000 people working in a large facility where the whistle blows and then everyone goes home. People in dispersed housing are working for dispersed organizations.”

People’s schedules are also changing. Employers are providing more flexible schedules, which allow people to come and go at different times. And people are changing how they use their commutes.

It’s what people who study commutes call “trip-chaining.” A trip to work is really a trip to day care, then to the bank, and then to work. Tacking on errands makes it difficult to coordinate carpooling.

The errands often fall on women. Brian Taylor, a professor of urban planning at the University of California, Los Angeles, calls this “the gender gap in schlepping.”

In a 2015 study in Social Science Quarterly, he found that, in couples with children, women make twice as many trips related to caring for children as their partners.

“People tend to drive every day because they want the flexibility of deciding when they make that non-work stop,” said Chandra Bhat, a professor of transportation engineering at the University of Texas at Austin who studies commuter behavior. “They want to make that decision on the fly.”

Reversing the slide in carpooling to and from work is a big challenge, but Uber and Lyft have shown success in getting people to share rides.

Uber’s pooling trips, which it started in 2014, comprise about 20 percent of its trips worldwide. When people open the app they can choose between a regular ride and a cheaper one that stops to pick up other riders. But the carpool option is only available in 13 major cities, such as Atlanta, Chicago, New York, Seattle and Washington, D.C. Lyft launched its carpooling service on a similar timeline and offers it in many of the same cities.

In Uber’s case, the company saw pooling as a way to make money, but quickly realized the environmental benefits.

“We initially started Uber pool as a business bet,” said Kaitlin Durkosh, a company spokeswoman. Riders get to split the cost of their trip while drivers have less idle time between picking up passengers.

Uber estimates that, worldwide, in the first three months of this year, its carpooling service has eliminated 21 million miles of travel, 400,000 gallons of gas and 3,800 metric tons of carbon dioxide emissions.

What’s not clear, however, is how many people are using the companies’ carpooling services to commute to and from work — where big dents can be made in traffic congestion, gas and emissions.

Uber and Lyft have launched a commuting service trial feature on their apps designed to match people already driving to work with a passenger looking to carpool. Uber’s commuting option in Chicago is still underway. But Lyft recently stopped its commuting program in San Francisco. That’s not because there was a lack of demand, said Lyft spokesman Tim Rathschmidt. There just weren’t enough drivers.

Uber also is looking at offering driverless rides and carpools. The company will soon test driverless cars in Pittsburgh.

Other new mobile apps also are aimed specifically at carpooling.

RideFlag, which launched in May, matches Miami-area drivers with passengers who want to carpool. Drivers set the price they would like to receive from passengers, but RideFlag sets an upper limit so drivers cannot profit.

“We use similar technology as Uber, but for a completely different purpose,” said RideFlag CEO Mike Papineau. Uber pool pays a driver to shepherd riders around. RideFlag pairs riders with drivers who are already on the road.

Paul Mackie with Mobility Lab, which advocates for sustainable transportation, said the ride-hailing services have started to change attitudes about carpooling by having gotten people “to get out of the mind frame that you have to drive alone.”

Carpooling to and from work may not become a daily habit for many people, said Steven Polzin of the Center for Urban Transportation Research, at the University of South Florida. But the flexibility the apps offer could persuade commuters to do it on days when don’t have errands to run, he said.

To really turn around the decline in carpooling, many more people would have to start using ride-hailing apps. Eighty-five percent of people have never used Uber or Lyft, according to a Pew Research Center survey. (The Pew Charitable Trusts funds both the Pew Research Center and Stateline.)

“There’s a lot of excitement” about ride-hailing, Eno’s Lewis said, “but in order for it to become mainstream, many more people will have to be using it.”