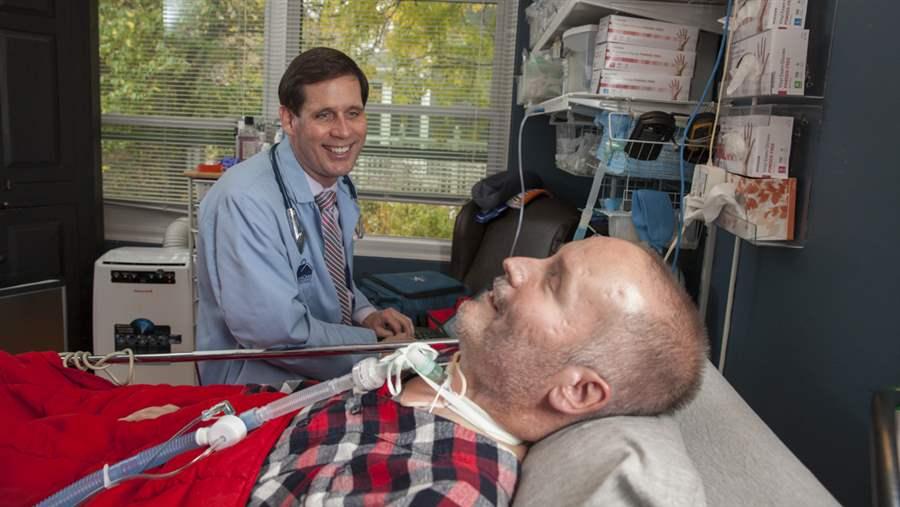 Joshua Bowler, who was paralyzed and suffered a brain injury from a fall 11 years ago, is tended to by his doctor, Thomas Cornwell, in Bowler’s home in Glen Ellyn, Illinois. Home health care saves money by keeping homebound patients out of hospitals and emergency rooms.

Doctors who make house calls may seem like something from America’s Norman Rockwell past. But they never disappeared entirely, and there is new evidence that home visits can play an important role in providing health care to the aged and chronically ill — while saving taxpayers millions.

The federal Centers for Medicaid and Medicare Services (CMS) said this month that a demonstration project has shown that delivering comprehensive primary care services at home helped to keep Medicare recipients with multiple chronic illnesses or disabilities out of hospitals, emergency rooms and nursing homes.

Many of those patients are among the 37 percent of Medicare beneficiaries with more than three chronic health conditions who together consume almost three-quarters of spending for the federal health care plan for the elderly and disabled. Because they are sick, frail, and often isolated, they are prone to putting off visiting their primary care provider while their conditions worsen, leading to more expensive care down the road.

But having a doctor come to them can make all the difference. And the savings for taxpayers could be significant: The CMS analysis found that house calls saved an average of $1,010 per beneficiary.

A 2014 U.S. Department of Veterans Affairs study estimated that home care for Medicare beneficiaries with multiple chronic illnesses could save close to $4.8 billion a year.

Doctors who make home visits say encouraging house calls could also bring savings to Medicaid, the health plan for the poor financed jointly by the states and the federal government.

Evidence of the savings from home health care has been promising enough to spawn a bipartisan proposal in the U.S. Congress that would make the demonstration project, which provides financial incentives to primary care practitioners to tend to elderly and disabled patients in their own homes, a permanent feature of Medicare.

Ross said 18 doctors and six nurse practitioners from her program made about 12,000 visits last year to 1,600 patients in Manhattan, 90 percent of them elderly and the rest with severe conditions such as multiple sclerosis, morbid obesity or amyotrophic lateral sclerosis, known as Lou Gehrig’s disease.

Physician house calls were once a staple of American life. But over time, reimbursement rates for primary care physicians did not keep pace with those for other medical specialties, and, from the 1980s onward, it generally became more difficult to sustain primary care practices. As that happened, those who made house calls were less able to afford the losses that came with making home visits, and many retreated to office-based practices, where they could see more patients.

As medical technology became more prevalent, doctors were less inclined to leave office- or hospital-based practices and their high-tech equipment, said Nengliang Yao, an assistant professor in public health at University of Virginia School of Medicine.

But many doctors and nurse practitioners with patients who are housebound — because of age, chronic illnesses or disabilities — kept making house calls.

In 2013, about 5,000 primary care providers across the country made 1.7 million house calls to Medicare beneficiaries, according to a study co-written by Yao in this month’s issue of Health Affairs.

Most homebound patients live 30 or more miles from the providers who do the highest volume of house calls, Yao found. Many more would benefit from home visits if the service was available where they lived, he said.

Less than 12 percent of completely homebound Medicare beneficiaries received primary care at home, according to a 2015 survey in the Journal of the American Medical Association-Internal Medicine.

Between now and 2035, with the aging of the baby-boom generation, the population over 65 is expected to grow from 48 million to 77 million and, with it, the number of homebound Americans.

But making house calls represents a considerable financial sacrifice for practitioners. A primary care physician in an office commonly sees 20 or more patients a day, but it’s rare for a doctor making home visits to see even half that number. Many doctors who make home visits also maintain an office practice in order to remain solvent.

Dr. Thomas Cornwell, a family practitioner in the Chicago area, estimates that he has made 32,000 house calls to 4,000 patients over the last quarter century. But it hasn’t been easy.

A health care company Cornwell once worked for, which specialized in house calls, went bankrupt in 1995. Now he runs HomeCare Physicians, a small group of doctors and nurses who make house calls in the West Chicago area that is part of the Northwestern Medicine health system. The practice, he said, depends on the hospital system kicking in about $375,000 a year to cover its losses.

Those who have a high volume of house calls say it’s impossible to make a go of it without financial support from hospitals, health care systems, philanthropy or other sources to make up for operational losses.

Terri Hobbs, executive director of Housecall Providers Inc., in Portland, Oregon, said that in her 15 years with the organization, it has received about $2.2 million in grants from local foundations in order to stay in operation. The company has made more than 150,000 house calls since 1995.

Medicare in the 1990s increased reimbursement rates paid to doctors for making house calls, with payments now ranging from $55 to $232 per visit depending on geographic area and medical services performed, according to the American Academy of Home Care Medicine. In most cases, however, physicians say the reimbursement doesn’t cover their costs.

To help ensure their financial viability, Hobbs and others who make house calls successfully lobbied for relief in the 2010 Affordable Care Act.

A provision of the law authorized the three-year Independence At Home demonstration project, which began in 2012. It has been extended until 2017.

When participating medical practices spend less than limits set by CMS, they receive a share of the savings. They also have to meet certain quality standards, for example, achieving low rates of hospitalizations, readmissions and emergency room visits by their patients. To participate, medical practices have to make house calls, be available 24/7, and have at least 200 Medicare beneficiaries with multiple chronic health conditions, such as cancer, diabetes, cardiovascular disease and asthma.

Seventeen practices across 15 states and the District of Columbia participated in the first two years and, according to CMS, achieved $35 million in savings. Ten practices shared in nearly $17.4 million in incentives for besting their financial and quality targets.

The program saved $3,070 per beneficiary in the first year and $1,010 in the second. (CMS changed the way it calculated the savings between the two years.) CMS reported fewer hospital readmissions for the tested group, and fewer inpatient hospitalizations or emergency room visits.

Hobbs’s Housecall Providers, in Oregon, reported that it achieved 32 percent savings in its first year in the project and 26 percent the second year. The nonprofit earned $2.3 million for those savings. “Before Independence at Home, we were able to stay in the black,” Hobbs said, “but barely.” In 2015, it made about 11,000 home visits serving 1,450 patients.

Physicians who make house calls say Medicaid, which also serves a disabled population, could increase savings by encouraging more primary care home visits. House calls by doctors and nurses already may be saving Medicaid money by keeping beneficiaries out of nursing homes, which are paid for by Medicaid, rather than Medicare.

“The longer you can keep people out of nursing homes, the more money you are saving,” said Dr. Bruce Kinosian, an associate professor at the University of Pennsylvania’s School of Medicine who works in the school’s in-home primary care program, which does about 3,000 home visits a year for a patient population of 210.

Doctors who make house calls say the home visits provide them with insights that can improve their medical care for their patients.

“I can see their home environment,” said Dr. Eric De Jonge, director of geriatrics at MedStar Washington Hospital Center, in Washington, D.C., and president-elect of the American Academy of Home Care Medicine. “Are they safe in their homes, what kind of food are they eating? You can see their medication bottles, which they often don’t bring into the office.”

For patients, the advantages are plain. Elizabeth Crane, a 92-year-old great-grandmother with multiple health problems, including asthma, severe allergies and a bad heart, lives alone in a Portland, Oregon, apartment and says she used to suffer through repeated hospitalizations because getting to her doctor was simply too arduous.

But since enrolling in Housecall Providers about two years ago, she’s only had to visit the hospital once. The day she spoke by phone, a nurse practitioner had just left, and two days earlier, her doctor had stopped by. “I don’t know what I’d do without her,” Crane said.

For Joshua Bowler, a 41-year-old who was paralyzed in both arms and both legs after falling from a roof 11 years ago, Cornwell’s visits to his home in Glen Ellyn, Illinois, represent far more than convenience. Transporting the inert, 180-pound man, who is on a ventilator that connects to a tube in a hole in the front of his neck, is enormously difficult for his parents, Tom and Trudy. It’s also perilous.

“He has a very compromised immune system,” said Tom Bowler. “Any time he goes to a hospital, there’s the risk he’s going to get an infection or worsen one he’s already developed.”