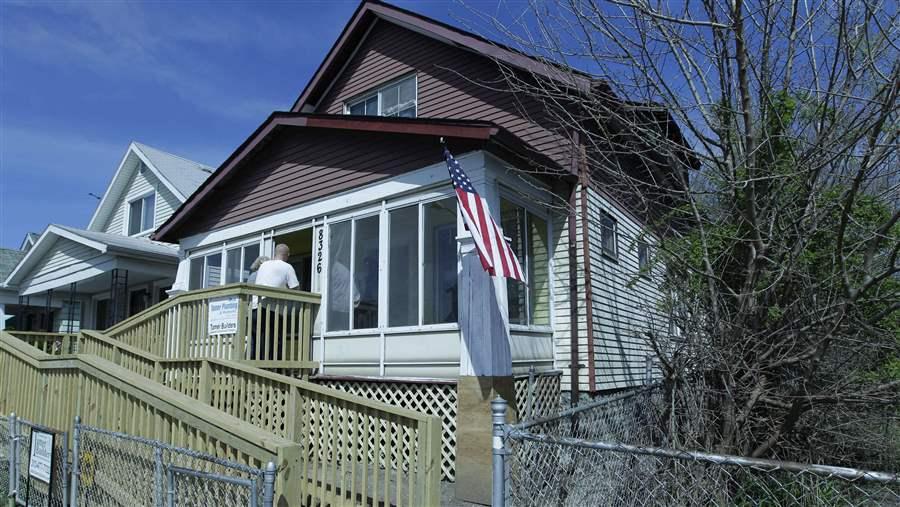 Wheelchair ramps are among the home modifications that older adults may need to stay where they live. Several states have considered bills that would give tax credits to residents who make their homes more accessible.

Most seniors and aging baby boomers want to remain in their homes as they grow older. But to do that, many will have to retrofit their homes to accommodate them if they become frail or disabled — and that can be prohibitively expensive.

Virginia and at least three counties in the U.S. have approved tax credits for residents who make their homes more accessible. Modifications include adding ramps to create step-free entrances, widening doorways and putting grab bars in bathrooms.

For states, giving tax credits to allow people to stay in their homes may be a money-saver, since it’s much more expensive for Medicaid, the joint state-federal program for the poor and disabled, to pay for nursing home care.

Violet Peyton, of the Virginia Department of Housing and Community Development, said her state’s Livable Homes Tax Credit is available to homeowners of all ages, but it’s especially important to seniors and baby boomers — now between the ages of 52 and 70 — who want to remain at home as they grow older.

“Often, this is the home where they raised their families or spent most of their lives,” she said. “If there is any way they can retrofit it, they want to do that and remain in that environment.”

In Virginia, homeowners or contractors can get a tax credit to retrofit a house for 50 percent of the costs up to $5,000. Or they can get as much as $5,000 in credits to buy or build a new home with accessibility features.

The state allocates $1 million a year for the tax credits, which have been given to more than 1,100 homeowners and nearly 400 contractors since 2008. Recipients got on average $3,536 in credits for the 2015 tax year.

This year, legislators in more than a half dozen states, including Maryland, South Carolina and New Mexico, considered tax credit measures modeled after Virginia’s. None were approved.

In Rhode Island, John DiTomasso, an associate state director for the AARP, said a similar bill failed there this year because of the cost to the state — up to $500,000 a year.

He said he thinks the bill will be refiled next session and is optimistic about its passage because it faced no opposition and had strong support from a coalition ranging from disability advocates to real estate agents.

“Rhode Island is facing a huge increase in the 65-plus population in the next decade. We have baby boomers every day who are moving into that age group. This is where are future housing needs are going to be.”

In Illinois, a tax credit bill that would have applied only to seniors and people with disabilities also failed this year. Its sponsor, Democratic state Sen. Linda Holmes, said it had bipartisan support but died in a subcommittee as legislators wrangled over an 18-month budget impasse with Republican Gov. Bruce Rauner.

Holmes called her bill “a simple fix” that made sense both fiscally and from a quality of life perspective.

“Ultimately, it’s more cost-effective for us as a society. It makes more sense to help people who are aging make their own home a little more accessible so they can maneuver, rather than end up in a nursing facility, which ultimately could cost the state a lot more money in Medicaid spending.”

The senior population in the U.S. is expected to explode in the coming decades, as the number of those 65 and older jumps from 48 million in 2015 to 77 million by 2035. Many live in multistory single-family homes that have lots of stairs, front entrances with steps and no full bathroom or bedroom on the first floor.

A report in May concluded that there would be an increase in housing that is accessible to an aging population if state and local governments created more tax credits for home modification.

“In many cases, it’s less expensive to retrofit than it is to move to another house or condo or apartment,” said Kathy Robertson, an associate director of the Virginia housing agency.

Livable home tax credits also are available in Howard and Montgomery counties, in Maryland, and Allegheny County, Pennsylvania. Participants can get a break on their county property taxes, and as in Virginia, they don’t have to be a certain age or have a disability to qualify.

In Howard County, homeowners can get a tax credit of $2,500 or 50 percent of eligible costs, whichever is less. The county applies any credit above what is owed in property tax to future tax years.

Some communities also have changed zoning laws to encourage developers to build single-family homes using “universal design,” with features such as no-step entry and wider hallways and doorways. Those standards are mandatory in a few areas, such as Pima County, Arizona, and Bolingbrook, Illinois.

A livable housing tax credit proposal also has been pitched in the U.S. Congress.

In May, U.S. Reps. Patrick Murphy, a Florida Democrat, and Bruce Poliquin, a Maine Republican, introduced a bill that would give federal tax credits to people 60 and over who spend up to $30,000 to make home modifications so they can grow old there.

“This isn’t an individual problem; it’s a national housing issue,” said Louis Tenenbaum, a former contractor from Maryland who recently started a group, Homes Renewed, that advocates for more housing that meets people’s needs as they grow older.

Tax credits are a good way to help middle-class seniors who don’t qualify for government programs, Tenenbaum said. “The better you prepare your home, the better it will be for you, and you won’t be forced to move because you can no longer stay there.”

The push to create home modification tax credits was started by disability advocates. People with disabilities often need expensive retrofitting in their homes and many can’t afford it, said Karen Mariner, a vice president at the National Multiple Sclerosis Society.

Mariner’s group has made tax credits a policy priority in the last three years and advocated for legislatures to offer them as a way to give financial relief to people with disabilities who wanted to maintain their independence and mobility.

“People with MS are younger, and as they progress, it becomes a safety issue,” she said. “They have a high number of falls, and this [the retrofitting] minimizes the number of [emergency room] visits they may have to make.”

A handful of states, including Kansas and Missouri, have enacted laws granting tax credits for people with physical disabilities. This year, Maine passed legislation offering up to $9,000 for homeowners to retrofit if they meet certain disability and income requirements.

Recently, the MS society started working with AARP in some states to push for homeowner tax credit measures not only for people with disabilities but also for seniors, Mariner said.

This year, legislators considered tax credit bills in at least a dozen states. Most were drafted broadly, with no age or disability requirements. Some were targeted only for people with disabilities. And a few applied only to that group and to older adults.

Mariner said she expects most of the measures will be reintroduced in 2017.

“We feel confident we’re going to see more states recognize that these types of programs end up benefitting them. It’s cheaper to keep people in their homes. And that’s what we want.”