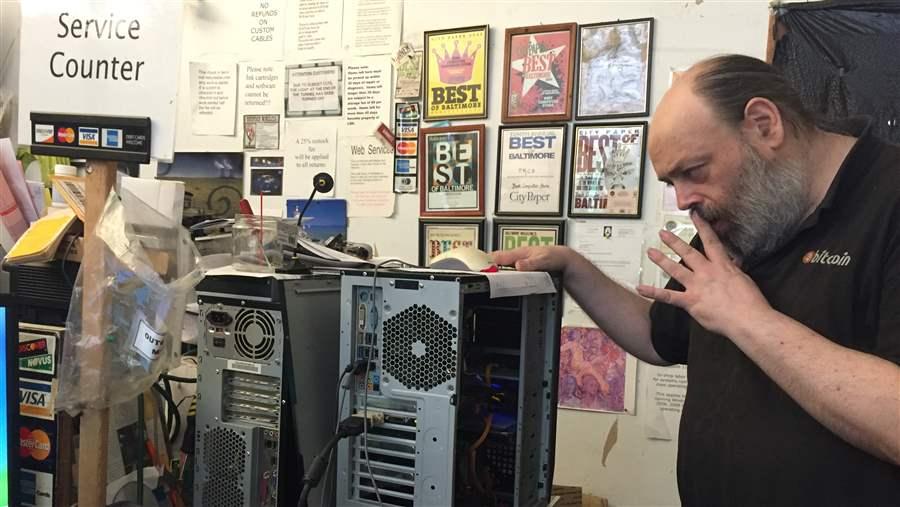 John Reynolds, a technician at the Little Shop of Hardware, in Baltimore, explains the challenges of fixing computers without being able to order parts directly from the manufacturer.

BALTIMORE — When the technicians here at the Little Shop of Hardware needed to replace a keyboard on a laptop, it took months to find the part and when it finally arrived, it didn’t fit.

Because manufacturers typically won’t sell repair parts to customers or independent repairmen, the employees at this computer repair shop in North Baltimore were left searching online for a keyboard in hopes it would be compatible with the computer they were asked to fix.

“There are things we just can’t get,” John Reynolds said. “They just won’t let us have them.”

Because they can’t get what parts, manuals and tools they need from the companies that make them, Reynolds and his co-workers must use their engineering backgrounds and online tutorials to figure out how to fix laptops, desktop computers, smartphones and other devices. Sometimes they have to tell customers that repair is impossible.

A group of independent repair shops, mechanics and do-it-yourselfers who fix and resell used electronics, appliances, medical and farming equipment want to change that. They want to do so by requiring manufacturers to open access to the manuals, parts, tools, diagnostic equipment and permanent software that is almost exclusively available to their own employees and authorized dealers. The Repair Association has lobbied for “right to repair” bills in five states — Massachusetts, Minnesota, Nebraska, New York and South Dakota. None have passed.

The bills are modeled on a 2013 Massachusetts law that requires automakers to give the same information and parts to independent auto repair shops as to their licensed dealers. In 2014, automakers agreed to apply the law’s provisions across the country.

The laws are not what electronics manufacturers want. They say they could open the door to the sale of counterfeit devices and the resale of electronics that were improperly repaired.

The laws could also pose a significant liability risk for the manufacturers if their software is repaired incorrectly, said Walter Alcorn, a vice president at the Consumer Technology Association, a trade group whose members include Apple and Google.

Gay Gordon-Byrne, who heads the Repair Association, said that allowing manufacturers and dealers to retain a monopoly on repair means they can make it hard to fix products and charge so much for repairs that consumers are all but required to buy new devices.

Her group is asking for a technological about-face. It essentially wants to go back to a time when manufacturers offered schematic diagrams to help diagnose problems, and corner repair shops could order the parts to fix most household appliances.

“You knew what was connected to what,” Gordon-Byrne said. “If you wanted to take your TV or look at the schematic and say, ‘I think this [part] is fried,’ you could go down to the local TV repair shop and buy a part.”

Reynolds, the technician in Baltimore, said a right to repair law could make his job easier.

In addition to fixing broken hardware, he resuscitates virus-stricken computers and retrieves data from otherwise inoperable machines. But manuals are largely unavailable, so to make it happen he has to search on YouTube and other online, after-market tech guides.

“We have to sit here and learn, just like everybody else,” Reynolds said, noting that the time and money involved in researching repair solutions and trying to find the right parts can be costly for small businesses.

Kyle Wiens, a board member at the Repair Association, co-founded iFixit, an online database of electronics repair tutorials, to try to fill the information gap for people who want to take a crack at fixing their own electronics. His website helped more than 85 million people worldwide repair devices in the last year.

Frustrated by an attempt to fix a broken power port on his laptop — an Apple iBook — in college, Wiens began collecting tutorials to help other tinkerers salvage their computers, cameras, cellphones and other devices.

He’s confident that access to repair information could give a boost to a dwindling consumer electronics repair industry while at the same time increasing brand loyalty for the manufacturers. Consumers are likely to buy from a company in the future if they have an option to repair existing devices, he said.

“If you go to the most rural town in America, you’ve got a gas station, a mechanic and a grocery store — and that’s it. That’s the core of commerce in the United States, and as electronics become more and more central to our lives, there could also be an electronics repair shop.”

Repairing and reselling electronics could even be more valuable than recycling them, said Resa Dimino, public policy director at the Product Stewardship Institute, a nonprofit that supports efforts to reduce waste generated by consumer products.

Right to repair laws could be good for the environment and mean more income for repair shops, Dimino said. “Take this laptop and resell it as a laptop instead of crunching it up and selling it for the value of its component parts.”

Repair on the Farm

The Repair Association — whose members include farmers — says manufacturers are limiting farmers’ ability to fix equipment themselves, adding that a decline in dealers and mechanics in rural areas means farmers often lose valuable time waiting for repairs.

Just like cars, farm equipment has evolved to include complicated computer equipment that helps farmers save money and plant their crops in a more sustainable way through GPS and other technology, said John Hansen, president of the Nebraska Farmers Union.

Consolidation among farm equipment dealers means fewer technicians are available to service tractors and combines, Hansen said, adding that the nearest repair shop might be more than a hundred miles away. Some of his 4,000 members are frustrated by long wait times for repairs during critical planting and harvesting seasons, he said.

“These guys are smart guys, they’re gear heads, they work on their own stuff as much as possible.”

Andrew Goodman, president of the Iowa-Nebraska Equipment Dealers Association, acknowledges that dealers have consolidated, but he insists there still are plenty of repairmen.

He points out that the number of farm equipment dealers in his group has only decreased by 58 — from 508 to 450 — in the last 22 years. He says there’s not a location in his area that a mobile service truck can’t reach within 20 minutes.

Farmers are looking to do more than override simple computer codes or change their oil, he said. Some want to convert how their engines work and make other changes that could jeopardize safety and leave dealers and manufacturers liable for equipment that is resold after improper modifications.

Goodman also said that farmers could destroy the value of their equipment by modifying it beyond safety and environmental standards.

If farmers still want to do their own maintenance, he said, manufacturers are willing to sell manuals and parts, but they need to be properly trained.

“You can’t do these things without the right training,” Goodman said. “You can do your own servicing of the equipment and you can get the information to do that. What you can’t do, and be in compliance, is change the engineering of it.”