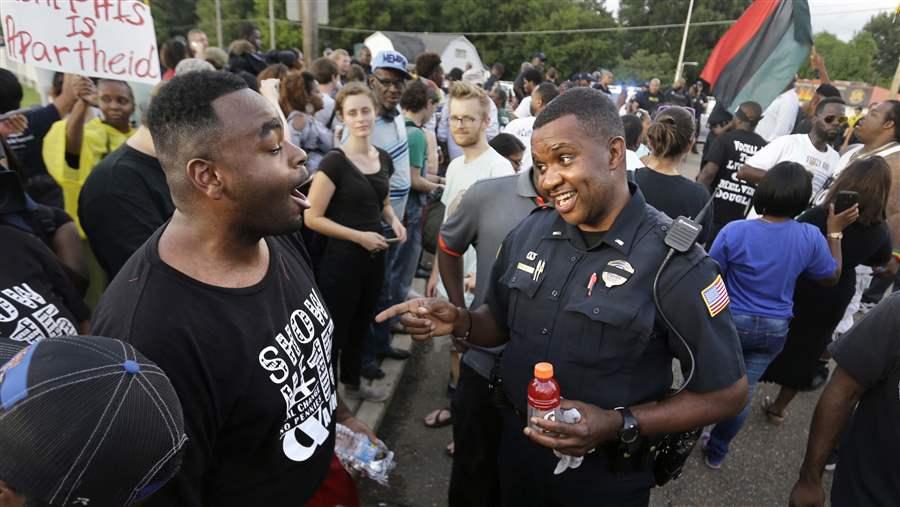 A Memphis, Tennessee, police lieutenant tries to calm a crowd of protesters. Some cities are trying to recruit more minority officers as a way to ease racial tensions.

Normally, when the Dallas Police Department hosts its monthly testing for people interested in becoming police officers, about 70 to 80 people show up. This past weekend though, the department was expecting about 280.

The larger turnout followed a call from Dallas Police Chief David Brown to join the force after five officers were killed and others injured in a targeted ambush there last month. The chief asked young black men to stop protesting, to start applying, and to help fix the problems they see in their community.

As police-involved shootings have increased tensions between police and black communities across the country, some law enforcement agencies have put out similar calls for help in hopes of recruiting a more diverse force as one way to re-establish community trust. Leaders in Indianapolis, Minneapolis and Knoxville, Tennessee, recently refocused their efforts to attract and hire more minorities.

But officials say that having a diverse force is only one way of moving forward. In fact, they point out, research is mixed as to whether diversity helps reduce tensions. Other strategies, they say, help as much or more, such as hiring officers who know and understand the community, asking officers to build better relationships with neighborhoods they serve, reducing officers’ use of aggressive arrest tactics and increasing officer training.

In Baltimore, the police force is fairly diverse — about 42 percent black, compared to 63 percent of the general population.

Yet in a scathing report released this month, the U.S. Justice Department said Baltimore’s policing strategies lead to “severe and unjustified disparities in the rates of stops, searches and arrests of African Americans.”

Aggressive policing tactics hardened a “long-simmering distrust of law enforcement” in parts of the community, the report said.

Conflicts between the police and the community stem from much deeper issues — ones that police are not trained to solve, said Thomas Harvey, co-founder and executive director of ArchCity Defenders, a nonprofit advocacy group that provides legal services for indigent people in Ferguson and the rest of St. Louis County, Missouri.

“Why do we as the public keep expecting police officers to fill the role of nurses, social workers, housing specialists, mental health experts, drug treatment providers, poverty experts and racial justice advocates?” he said. “We don’t need more police. We need to make a commitment to address the root causes of poverty, which is at the heart of what we call crime in America.”

Law enforcement has had some success attracting more minorities. The share of minority officers nationally has nearly doubled in three decades, growing from 14.6 to 27.3 percent since 1987, according to the U.S. Bureau of Justice Statistics.

But that still doesn’t equal the share of minorities in the U.S., at 37.2 percent.

The Ferguson Police Department had two black officers when Michael Brown was shot and killed, two years ago, by a white police officer. To diffuse tensions, the U.S. Department of Justice recommended many changes to the police department — including hiring more minorities. Five more black officers have since been hired, including the new chief, Delrish Moss.

Yet it is unclear if having a diverse force will make a difference, Harvey said. “We can’t get trapped into thinking that individual police officers can change systems.”

A 2004 National Research Council report found that, “there is no credible evidence that officers of different racial or ethnic backgrounds perform differently during interactions with citizens simply because of race or ethnicity.”

White officers in Cincinnati were not more likely to arrest non-white suspects, under similar circumstances, but black officers were, a 2006 study found.

Racial bias in policing comes more from the culture of police departments, said Delores Jones-Brown, founding director of the Center on Race, Crime and Justice at John Jay College of Criminal Justice in New York.

The Justice Department announced in June that it would start giving its lawyers and law enforcement agents implicit bias training.

There are two major reasons why law enforcement struggles to recruit minorities, Jones-Brown said. When police treat communities like they are all criminals, they don’t want to be part of the agency. And when police enforce low-level crimes in communities of color, many people end up with criminal records that disqualify them from applying.

In Knoxville, past recruiting efforts had little success, said David Rausch, the chief of police. Of the 386 sworn officers there, 358 are white.

The lack of diversity could be the result of a lack of qualified minority candidates, Rausch said. But it also could be because of a stigma attached to police by the minority community, which has worsened with recent events across the country.

“We have folks where all they’ve ever heard in their life is law enforcement is the bad guys,” he said. “And quite frankly, my goal in the last five years is to change that.”

Last year, Knoxville police upped its efforts in recruiting minorities. As a result, Rausch estimates, about half of the applicants being interviewed are minorities, compared to the usual 20 percent.

In Indianapolis, the City-County Council voted in April to update its recruitment law to allow the chief of police to handpick 20 percent of applicants, with the rest chosen based on their qualifications, in hopes it would allow for more minority recruits.

Sometimes the racial composition of law enforcement changes as the community changes, especially when a department tries to make the job more attractive.

That’s true in Texas, where the Hispanic population has increased significantly. The share of Hispanic recruits to the Texas Highway Patrol has increased from 31 to 41 percent since 2014.

Pay has increased. So, too, has recruitment. And much of the new hiring has been in communities near the U.S.-Mexico border, said Tom Vinger, press secretary for the state’s Department of Public Safety. Hispanics comprise a larger share of the population there.

Even in large police departments, only a few across the country approximately reflect the racial diversity of their communities, according to a 2015 New York Times analysis.

One of those, in Atlanta, has long been admired for its ability to attract a diverse force — 60 percent of sworn officers are black in a city where 52.4 percent of residents are.

Atlanta leaders have been deliberate about hiring minorities for decades, said Chief of Police George Turner, adding that it helps to involve minorities in recruiting. It also helps to promote minorities, he said. Twenty-three of the 43-member command staff are black, including Turner.

“If your command staff doesn’t reflect your community at the top of the organization, people feel like there is a ceiling in this agency, and they don’t feel like they have a chance of moving in,” Turner said.

Diversity, especially in leadership, can improve problem-solving and increase innovation, said Patrick Oliver, who runs a criminal justice program at Cedarville University, in Ohio, and worked in law enforcement for 27 years.

Diversity at the top also can prevent a culture of racial bias. Managers set expectations and policies, and supervise officers, Oliver said.

Communities see diverse police departments as more legitimate and are more likely to take ownership in policing when a department is diverse, a 2000 study found.

Calling for more diversity in police departments simply distracts from the real issue, said L’lerrét Ailith, communications manager with Black Youth Project 100, a group of 18- to 35-year-old black activists. The real issue, she said, is law enforcement is inherently anti-black and black communities do not receive enough social services.

Police understanding of a community may be more important than its racial composition. In Baltimore, most officers are not from the city, and three-quarters of them don’t live there.

Officers who come from the community will know its history and what it needs, said Chris Burbank, a former Salt Lake City police chief who is now director of law enforcement engagement for a national nonprofit, the Center for Policing Equity.

“Whenever [a police department] is viewed as an occupying force, that is difficult for community members,” Burbank said. “But when it’s individuals who have grown up in the community who are now on the police force, that goes a long way.”

Training also helps. In 2012, Dallas began training officers in how to ease tense situations that have the potential to spiral out of control. Hughes, the assistant chief of police, calls it teaching officers how to “slow down a bit, and approach these incidents a bit more carefully.”

“One little incident can tear down all that effort you’ve made to build community trust.”