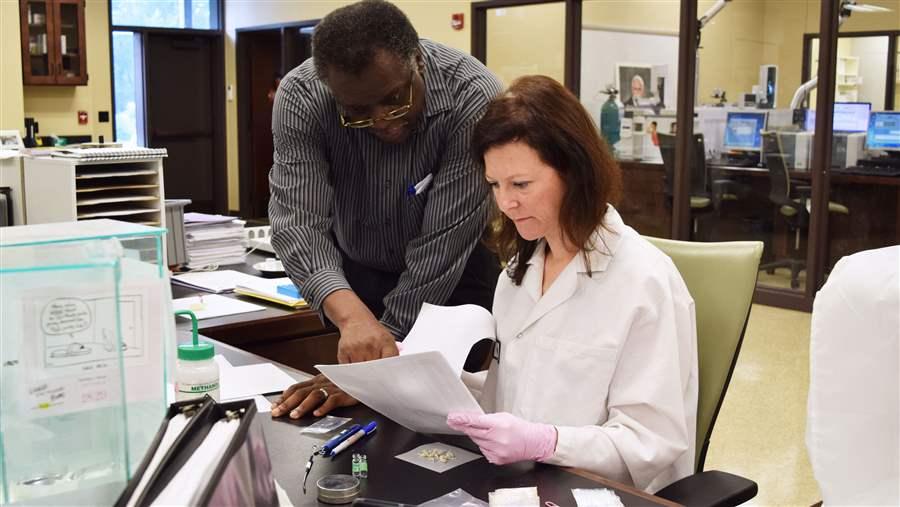 Forensic scientist Pamela Kitchens and lab director Sherwin Boswell examine heroin at a lab in Auburn, Alabama. Identifying new illicit drugs and determining the cause of death in drug overdoses is increasingly complex.

AUBURN, Ala. — As the opioid epidemic surges, Alabama’s toxicologists are testing more blood samples from overdose victims to determine what drugs were in their bodies.

But the results of those costly and time-consuming tests are not always ending up on death certificates. More often than not, when overdose victims are found to have multiple drugs in their bodies, coroners simply write “multiple drug toxicity” or “drug overdose” on the death certificate, says Alabama’s forensic science chief Michael Sparks.

As a result, public health officials in Alabama and at the U.S. Centers for Disease Control and Prevention (CDC) can be left in the dark as to which drugs are causing the most deaths. The lack of specificity can hamper states in developing potentially life-saving strategies for preventing overdoses.

Alabama was the least precise state when it came to drug overdose reporting in 2014, according to a CDC analysis of death certificate data from all 50 states.

U.S. opioid overdose deaths, including prescription painkillers and heroin, exceeded 28,000 in 2014, with a one year increase of 14 percent.

Eighty-one percent of all death certificates for a drug overdose listed the drugs involved. That number has grown in the last five years as states have stepped up efforts to include more details about overdoses to help develop strategies for quelling the opioid epidemic.

“We’ve been saying drug overdoses were a problem since 2006, but it wasn’t until it got to much higher levels around 2010 that people started waking up and saying ‘Oh, we need to do something about this,’ ” said Robert Anderson, chief of the mortality statistics branch of the CDC.

Still, it’s taken some states longer than others to relay the message to the coroners, physicians and medical examiners who fill out death certificates at the local level, he said.

In Alabama, only 48 percent of death certificates mentioned the drugs involved in 2014, followed by Louisiana (49 percent), Indiana, Mississippi and Pennsylvania (all 50 percent), Montana (63 percent), Idaho (64 percent) and Michigan and New Jersey (both 70 percent). 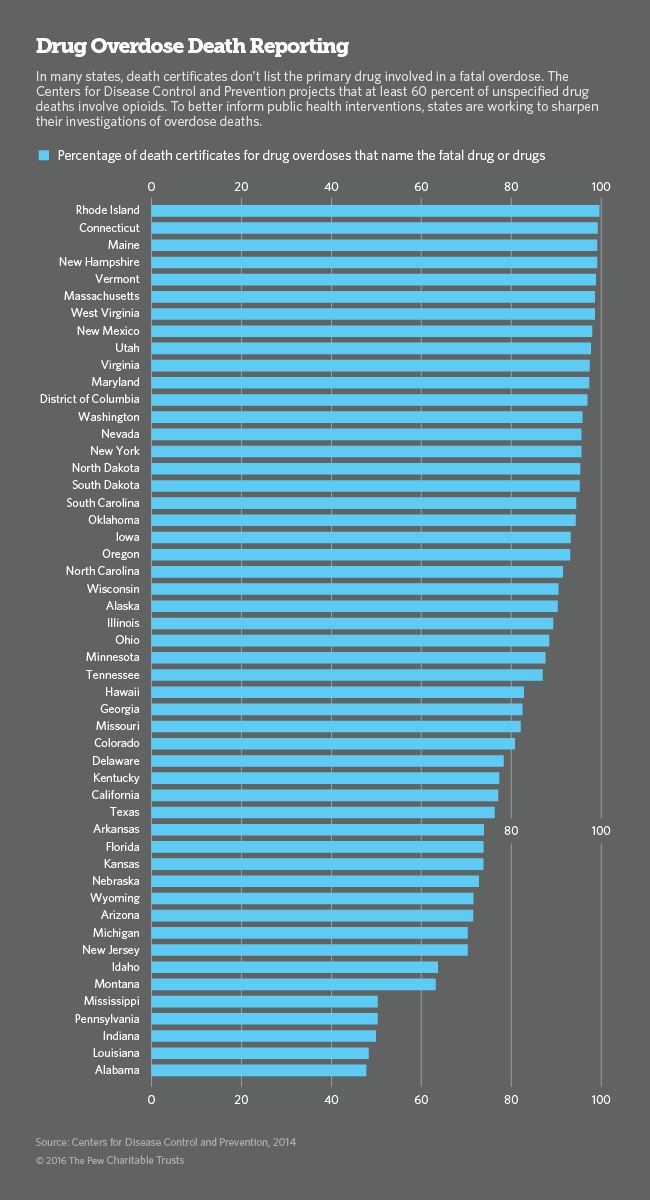 Listing the drugs involved in an overdose death not only allows the federal government to track the growing epidemic and fund intervention strategies for states to follow, said CDC epidemiologist Matthew Gladden. It allows states to achieve the more important goal of developing their own responses to the opioid epidemic, county by county.

For example, if prescription painkillers, such as Vicodin, OxyContin and Percocet, show up on a growing number of death certificates, states may want to beef up their prescription drug monitoring efforts to curtail overprescribing and insist that doctors adhere to safer opioid prescribing rules.

If heroin is increasingly reported as a drug involved in an overdose death, states, cities and counties may want to establish syringe exchange programs to stem the spread of infectious diseases, such as hepatitis C and HIV, that can result from needle sharing.

If heroin and painkillers together appear to be a growing cause of deaths, states and localities may want to make the overdose antidote naloxone more available, Gladden suggested. Public health officials may also decide to allocate more of their resources to medication-assisted addiction treatment, which is only available for opioid addiction and alcoholism, not for addictions to cocaine, methamphetamines, benzodiazepines or other drugs.

In 2014, Alabama led the nation in per capita prescribing of prescription painkillers, but its reported drug overdose death rate was only slightly higher than the national average.

It was also one of 14 states that experienced a significant increase in overdose deaths from 2013 to 2014.

Those numbers could indicate an undercounting of overdose deaths, Gladden said, in addition to a lack of information about which drugs were killing people.

Nationwide, of all overdose deaths, at least 60 percent involve opioids. The same ratio likely is found in death certificates for drug overdoses in which the drugs involved are not listed, Gladden said.

Although death certificates are roughly standard nationwide, the professionals who fill them out and the agencies they report to vary widely from state to state. As a result, the accuracy, timeliness and specificity of death certificates varies. In many states, inadequate funding for vital statistics and death investigations is also an issue, the CDC’s Anderson said.

In many states, a chief medical examiner, typically working within the state health department, ensures standards in determining the cause of death.

Others have county medical examiners or elected coroners, or a hybrid system of both — like Alabama’s.

States with centralized systems and medical examiners trained in medicine and forensic pathology are more complete in reporting details about the cause of death, Anderson said.

“In a utopian situation, if money were no object, you would want a medical examiner system,” Alabama’s Sparks said. But the state can’t afford to pay for that many medical examiners, he said.

Alabama has a hard time filling forensic positions because of a national shortage, he said. “Not many people with medical degrees and forensic training want to relocate to Alabama unless they have a specific reason to come here.”

The state employs about a dozen medical examiners who analyze roughly 3,000 deaths determined by district attorneys and coroners to be “suspicious, unnatural or unlawful.” There are about 50,000 deaths in the state each year.

The state’s largest county — Jefferson — runs its own death investigation operation independent from the rest of the state.

In addition, Sparks’ department oversees three morgues that perform autopsies, one toxicology laboratory, and five crime labs that examine drug seizures. It’s an elaborate system that reports to the attorney general and the governor, not the public health department.

When asked whether his agency was trying to increase the number of death certificates that include the drugs involved in overdose deaths, Sparks said it had never come up. “It just hasn’t been on our radar.”

“We work for the criminal justice system. That’s what we do.” For law enforcement and prosecution purposes, the toxicology information is available, Sparks said.

Coroners hand over their death investigation files to the local district attorney, who can use them in court as needed; and medical examiners routinely spend hours, if not days, testifying as expert witnesses in homicide cases across the state, he said. “In everything we do, we ask, ‘How would it benefit the criminal justice system?’ ”

Elected coroners don’t report to anyone. They work hand in hand with the local district attorney and law enforcers. They use lab reports and medical opinions from the state’s medical examiners to fill out death certificates. They have little interaction with state health authorities.

Like Sparks, Lee County’s coroner, Bill Harris, past president of the Alabama Coroners’ Association, was unaware that he should be listing the drugs involved in more overdose cases. He said he rarely listed the drugs unless it was obvious which one killed the person.

Besides, he said, the state’s new electronic death certificate system does not allow enough space to list all the drugs found in most people who die of an overdose. “If you enter too many letters, the system kicks you out.”

Alabama’s registrar of vital health statistics, Catherine Molchan Donald, said she has long been aware of the need to provide more detail in drug overdose cases, as in other types of deaths.

She says she has brought the issue up at the state’s annual coroner and medical examiner meetings and sent emails to coroners and examiners. But, she acknowledged, not all coroners come to every meeting or check their emails. She can only request they make a change, not require it.

In 2013, South Carolina listed the drugs involved on only 58 percent of death certificates for overdoses. By 2014, that number had jumped to 95 percent.

A letter went out to coroners in 2014 directing them to go back to the beginning of the year and add to death certificates the drugs found in toxicology reports, and to do so going forward.

Ann Joe, deputy coroner for Richland County, said, “I don’t even want to reminisce about how much work that was.” But now, she said, she’s used to it. Once the toxicology report comes in, which can be as much as 90 days after a death certificate is issued, she simply goes back and fills in a supplemental form. It takes about a half-hour at most, she said.