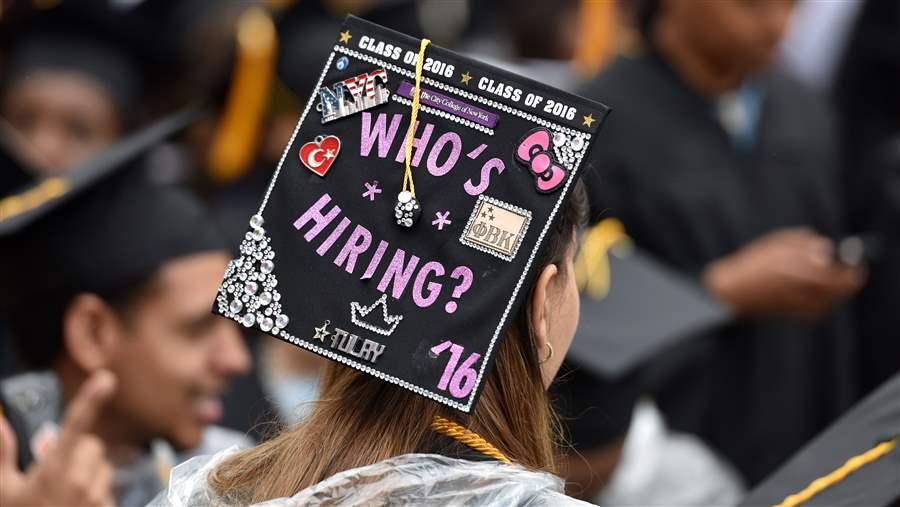 Young adults, often unable to find good jobs, even with a college education, are increasingly staying with their parents.

By now, Karen Wilk thought she would have sold her five-bedroom house in Colts Neck, New Jersey, and downsized to a smaller home. But she has had to put those plans on hold because her 23-year-old daughter, who is finishing her college degree while working part-time, still lives with her. Wilk’s 27-year-old son moved out two years ago.

“I don’t want to chase my kids out, but I expected them to be more independent by now,” Wilk, 54, said. “I don’t see my kids affording our neighborhood for a long time.”

Almost a third of young adults — 18 to 34 — lived with a parent in 2014, making it the most common living arrangement for that age group for the first time in modern history, according to a study published earlier this year by the Pew Research Center. (The Pew Charitable Trusts funds both the Pew Research Center and Stateline.)

Multiple reasons are behind the trend, lingering effects of the Great Recession, high housing costs and student debt among them. Whatever the causes, millennials in some states are living with their parents in far greater numbers than in others.

In New Jersey, a whopping 43.9 percent of young people are living with at least one parent, according to a Stateline analysis of 2014 census data from IPUMS at the University of Minnesota. Connecticut (38.8 percent) was second and New York (37.4 percent) was third, followed by Florida (37.2 percent) and California (36.7 percent).

States with the fewest young people living with a parent were North Dakota (15.6 percent), Wyoming (18.7 percent), South Dakota (19.7 percent) and Nebraska and Iowa (both 20.7 percent).

In New York City and surrounding states, scarce and expensive rental housing is a major factor pushing young adults to return home, said Dowell Myers, a professor of urban planning and demography at the University of Southern California, who wrote about the economic impact of stay-at-home millennials in a study published earlier this year.

Full nests are also prevalent in other areas where renters are severely burdened by housing costs of more than half of their income, such as Los Angeles, Miami and Orlando.

The high cost of homeownership is also a factor. Renters who might otherwise be homeowners end up renting longer, tying up the supply for those coming up behind them.

“Millennials were doubled up at entry levels of their housing life cycle, blocked by older peers who were unable to turn over their apartments for better homes,” Myers wrote in another study he published this year.

Millennials are the most educated generation ever. But in areas where housing is extraordinarily expensive, a college degree is not necessarily a ticket out of your childhood bedroom.

Lisa Jacobs holds two bachelor’s degrees, one in photography and one in graphic design. But work has been sporadic, so this year she moved back in with her parents in Somerset, New Jersey.

“My parents have a lovely home, but nobody’s happy to be living at home at 32,” Jacobs said, adding that she needs to make at least $20 an hour to afford an apartment. “There are plenty of places that would pay me $15 an hour. But that’s not getting me any closer to moving out.”

A Question of Culture?

But financial stress may be only part of the story. More young people were living with their parents even before the Great Recession hit. Some see cultural factors at work.

Debbie Pincus, a psychotherapist who has counseled parents and adult children who live together in New York City and its suburbs, said many of the parents she helps have a tendency to overshelter their offspring.

“You just have to be careful that you’re not enabling them to avoid going out on their own when they’re ready,” Pincus said. “We baby boomers are very protective of our children. We are less likely to put the kids out and say, ‘Figure it out for yourselves.’ ”

Resurgent ethnic traditions may be another factor: In the New York metropolitan area, most adult children of Italian heritage live with parents.

Jason Cerillo, 28, still lives with his parents in the predominantly Italian-American suburb of West Harrison, New York. He said there’s a cultural understanding that he can stay until he gets married.

“My dad is Italian, and he says, ‘Oh, stay as long as you want, but we do want to retire.’ So I am under some pressure here,” Cerillo said, adding that many of his high-school classmates in the neighborhood also live with their parents.

In the New York area, “co-residence” rates are also high for people with Irish, Dominican, Puerto Rican and African-American roots.

Cerillo said his monthly student loan payment — $500 — has made it hard for him to move out of his parents’ place, despite having made as much as $42,000 a year working for a software company. He said he hopes to pay down his debt to $20,000 before striking out on his own.

And underemployment among young people like Jacobs in New Jersey, who can’t find the work they trained for, is also a factor, said Christopher McCarty, director of Florida’s Bureau of Economic and Business Research.

Florida’s official unemployment rate is 5 percent. But McCarty points out that 10.6 percent of workers are unemployed or underemployed, with low-paid jobs they are overqualified for or part-time jobs when they would rather work full-time.

The underemployment rate is 11.7 percent in California, where Kelley Lonergan, 28, said she had to move back to her parents’ home near Los Angeles four years ago. She lived in a room still decorated with her brother’s video-game posters and kept her clothes on the floor because his closets were still full.

With an English degree from Brown, Lonergan said she got a part-time school communications job but couldn’t find full-time work.

The house got even more crowded when her older brother moved back in for a spell. She wrote about the comfort and frustration of living with her parents.

She said she was relieved to finally move out earlier this year. “I had been living with four people and now I’m living alone and it’s great.”

Myers, the USC professor, predicts that a coming dip in the number of young adults may allow a greater percentage of them to finally find their own housing.

The number of 25-year-olds has increased every year since 2005, but is projected to start decreasing next year and for the next five years. That’s likely to free up apartments and jobs for younger people at an increasing rate until 2022.

Robert Dietz, an economist for the National Association of Home Builders, said some cities were slow to adapt to the growth by building more apartments, but are catching up now. He expects older millennials to start buying single-family homes and freeing up apartments.

“Housing is like a ladder — when there are blockages, it backs up the whole thing, and the millennials are having a hard time getting onto the bottom rung,” Dietz said.