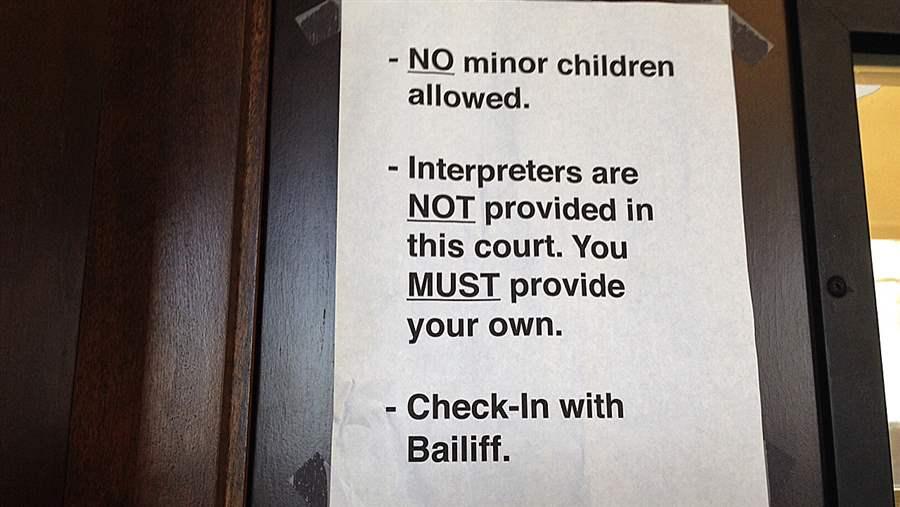 A sign indicating that no interpreters will be provided to defendants posted outside a courtroom in Redwood City, California. California’s Judicial Council last year approved a plan to extend free interpretation services to all cases by 2017.

Patricia Michelsen-King was observing the proceedings in a Chesterfield, Virginia, courtroom a few years ago when a man shouted in Spanish from the back of the courtroom, “I didn’t rape anybody!”

Michelsen-King, who teaches Spanish interpretation at Virginia Commonwealth University, said the outburst was the result of bad translation from his court interpreter. Though the man was accused of running a red light, his interpreter told him he was accused of a “violación,” which in Spanish does not mean “violation,” but “rape.”

The interpreter should have used the word “infracción,” said Michelsen-King, who was in the courtroom because she was about to begin working there as an interpreter, too. When she approached the distressed man, he was sitting with his interpreter, admitting to the traffic offense but firmly denying what he thought was a rape charge.

Such misunderstandings are surprisingly common in state and local courts. Because many states and localities don’t use tested court interpreters and ignore federal rules for when interpreters are required, many criminal defendants and civil litigants with limited English skills are not equipped to navigate the complex legal system, jeopardizing their constitutional rights.

“There is ample experience and anecdotal evidence to substantiate that many [people with limited English proficiency] regularly come before the courts and are unable, without language access services, to protect or enforce their legal rights, with devastating consequences to life, liberty, family, and property interests,” the American Bar Association (ABA) said in a resolution four years ago urging courts at all levels to adopt standards for interpreter services and calling for adequate funding.

The lack of skilled interpreters is less of a problem in federal courts, where interpreters must pass a competitive test. Most states certify court interpreters, requiring that they pass a test to demonstrate their language skills. But many state certification tests aren’t as rigorous as the federal one, and many state and local courts allow uncertified interpreters to serve even if they haven’t passed the test. Many states also ignore the federal mandate that they provide free interpreters in both criminal and civil courts.

In some states, the U.S. Justice Department has stepped in. Since 2010, the department has investigated courts in Colorado, Hawaii, Kentucky, New Jersey, North Carolina and Rhode Island for failing to comply with federal rules.

Because there are so many U.S. residents — roughly 25.6 million — who have limited proficiency in English, the credibility of the nation’s justice system relies on competent interpreters, Michelsen-King said.

A series of court rulings, an executive order and Department of Justice rules require states to provide interpreters in all court settings or risk losing federal money. Not doing so would be tantamount to unlawful discrimination based on national origin. And interpretation should be provided for free.

“Is everyone providing it across the board and free of charge? No. But it’s generally accepted now that that’s how it should be,” said Vanessa Ruiz, a judge with the District of Columbia Court of Appeals who chaired the ABA’s language access project that was instrumental in drafting the association’s resolution.

But eight states don’t certify court interpreters. Thirty-two of the 42 states that do certify interpreters require that courts give a preference to those who are certified, but many interpreters say the policy is not always followed.

Sometimes interpreting tasks fall to people who aren’t interpreters at all. Judges may ask a nearby probation officer or someone in the courtroom to translate. When an interpreter is not available, defendants and civil litigants may be instructed to hire an interpreter or bring a friend or relative to help them out, said Rob Cruz, executive director of the National Association of Judiciary Interpreters and Translators.

“One judge asked if there was ‘someone in an orange jumpsuit’ who could translate, under the assumption that there might be a Latino defendant that could interpret,” said Deborah Weissman, a professor at the University of North Carolina’s School of Law, who wrote a report on the state’s interpreter services. “The idea that you’d actually rely on some random person is absolutely unacceptable.”

States allow uncertified interpreters to serve for various reasons, said Agustín de la Mora, who trains interpreters in a number of states. States may not have a certification test for uncommon languages. And if they do, it’s possible that nobody has passed it. That forces judges to rely on someone who isn’t certified, or perhaps someone who is familiar with the language but doesn’t regularly interpret.

But using uncertified interpreters can pose problems. People who may be considered bilingual — perhaps they grew up speaking the language at home — may not have a wide vocabulary or grasp of technical legal language. Some states require people who interpret, but are not certified, to be trained to translate every single word and to reflect the emotions of the speaker. Interpreters also are told not to advise or advocate.

Certification tests require far more than that. They test not only language skills, including legal vocabulary, but the ability to interpret “simultaneously” so as not to delay court proceedings. Certified interpreters must remain no more than six words behind a speaker — listening to a torrent of words in English while translating what was just said into another language — for minutes at a time.

The tests aren't easy, and many bilingual people who seek certification struggle with them, said de la Mora. “They think they can interpret because they’ve been doing it for their family members their whole life.”

Many haven’t been formally educated in that language, he said. Skipping unfamiliar words or words without a direct English translation might work for low-stakes situations, but it doesn’t work in the courtroom. Not understanding nuances, especially legal nuances, can cause trouble in court.

Michelsen-King remembers one uncertified interpreter who struggled to translate “I went over to the table to chat, and when I went outside they attacked me.” But when it came to the word chat, or “platicar,” the woman struggled.

The Justice Department has required some states it has recently investigated to create a way for people to file a complaint about interpretation services, but it’s not always clear that people who struggle with English are aware of the process.

In Texas, which began testing and certifying interpreters in 2000, the state grandfathered uncertified interpreters who had courtroom experience and could provide letters of recommendation from judges.

But Michelsen-King said court employees may not always be the best judges of interpreting skills. Usually it takes another interpreter or someone familiar with the language to point out bad interpreting.

Some states try to balance the varying skill levels of interpreters with a tiered credentialing system.

Arizona, which does not currently certify interpreters, will soon have a four-tier system. Those who pass a basic proficiency test then move to another test. And depending on the accuracy of their translations, they are granted a two-year or permanent certification.

Robert Joe Lee, who implemented a tiered system in New Jersey in 1987 while serving as the state’s manager of language services for the courts, said tiers give the courts a known quantity. Those with lower certifications could interpret in less serious situations, say in a front office, while those at the “masters” level could handle serious court cases. It also gave interpreters a career path—those who test into a lower certification category are motivated to study and retest in the hopes of a higher certification and the accompanying higher pay.

But the system has a downside, Lee said: When courts want to save money, they turn to interpreters with the lowest certification.

Even with the number of strict federal guidelines on interpreters, courts often ignore those rules, particularly in states where there is no centralized oversight.

In 2010, the U.S. Justice Department sent a letter to states outlining the ways in which they were not following federal law on court interpreters: limiting the types of legal proceedings for which interpreters were invited, charging people for interpreting services and not providing interpretation for services that happen outside of the courtroom, such as in filing or probation offices, or for communicating with court psychologists, child advocates or other court employees.

Lawyers and scholars who study the issue say the situation has improved in states where the Justice Department has exerted pressure, but states continue to come under investigation.

The Justice Department investigated Kentucky in 2014 after a state judge refused to provide interpreting services. In a 2012 letter to North Carolina’s Administrative Office of the Courts, the department said the state was not providing interpreters in all the cases it was required to, including domestic violence proceedings, wage disputes, involuntary commitments and eviction proceedings. The letter also said the state was not doing an adequate job of informing people they had a right to an interpreter.

Aaron Sussman, an attorney with the National Center for Access to Justice at Fordham Law School, which recently reviewed access to court interpreters state by state, said interpreter resources are often targeted at criminal cases and litigants in civil matters are not always given interpreters.

“These civil courts deal with important issues,” he said. “This is family court, issues with custody and child support. This is people who are trying to get alimony. You’ve got housing court where people deal with issues with eviction and foreclosure.”

States often fail to provide oversight over lower courts — a situation De la Mora knows about personally because he has been hired by families to interpret in civil court cases in his home state of Florida. “The [state] Supreme Court can make rules,” he said, but it doesn’t oversee how or whether they are implemented.

Gillian Dutton, an associate professor at the Seattle University School of Law, said providing interpreters for proceedings inside a courtroom is not enough.

“As judges and legal systems move towards alternatives to incarceration, these services which have increased are not always available to those with limited English proficiency,” she said, pointing to parenting classes, community service, and other programs offered instead of prison time. “Outside of a courtroom it’s not clear interpreters are always offered for these services, so sometimes people just aren’t referred to them.”