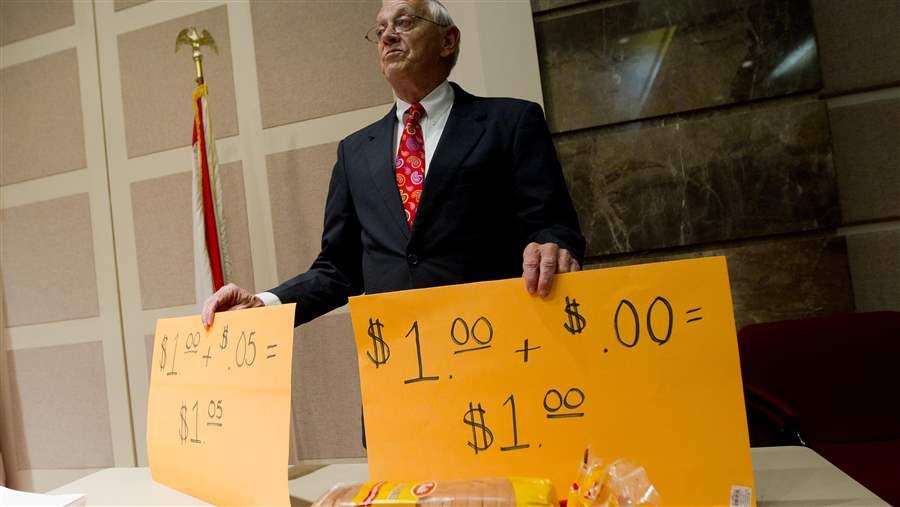 Republican state Sen. Gerald Dial has repeatedly tried and failed to eliminate Alabama’s sales tax on groceries. He says the tax “punishes those on fixed incomes.”

Thirteen states and many localities continue to tax the sale of groceries, even though the taxes disproportionately hurt the poor and may affect the quality, variety and even the amount of food they can afford to put on the table.

The reason: The taxes provide a steady source of revenue in volatile times, making it difficult for states to get rid of them without finding a way to make up the revenue. Recent efforts in several of the states to eliminate or lower the taxes have failed.

“States might be looking at getting rid of sales tax on groceries, but groceries are between a sixth and a seventh of all consumption,” said Scott Drenkard, analyst at the Tax Foundation, a nonpartisan tax study group. “If you want to raise the same amount of money you might have to increase the [general] sales tax by a full percentage point.”

Alabama, Hawaii, Idaho, Kansas, Mississippi, Oklahoma and South Dakota tax groceries at the same rate as the sales tax on all purchases, according to the Tax Foundation. Arkansas, Illinois, Missouri, Tennessee, Virginia and Utah tax food at a lower rate. Seven fewer states tax groceries than in 1998, when researchers at the Center for Budget and Policy Priorities found that 20 did. But the trend to eliminate the tax has stalled.

It’s not just states that rely on grocery tax revenue. A new study, “Do Grocery Food Sales Taxes Cause Food Insecurity?” by four researchers led by Norbert Wilson of Auburn University, finds that because counties and localities sometimes collect food taxes even if their states don’t, people living in more than a third of the nation’s roughly 3,000 counties are taxed at some level on the food they buy at the store.

The average tax rate is 4.3 percent, which translates to more than $200 for a family with an annual grocery bill of $5,000, the authors wrote. But in some places, like Tuscaloosa County, Alabama, combined state and local taxes can be as high as 9 percent.

The taxes disproportionately hurt low-income Americans, the authors wrote, and contribute to “food insecurity,” which the U.S. Department of Agriculture defines as “reduced quality, variety, or desirability of diet” or “disrupted eating patterns and reduced food intake.”

“The correlation that we are able to report says that in the presence of the tax we see a higher rate of food insecurity,” Wilson said.

Although families spend less on groceries than those with higher incomes, what they do spend accounts for a bigger share of their income. The lowest-income Americans spent an average of $3,667 on food in 2014, which amounted to 34.1 percent of their income, according to the U.S. Department of Agriculture. Middle-income families, in contrast, spent an average of $5,992 on food, or 13.4 percent of income.

People whose income is below poverty lines and who receive food stamps don’t pay the tax because the stamps are nontaxable.

'The Most Regressive Tax'

Many of those states that still tax groceries are among the least affluent in the country. Alabama, Arkansas, Mississippi and Utah are in the bottom fifth of states in per capita income.

And the Wilson-led study points out that most of the counties that do not exempt grocery from the sales tax are located in Southern states like Alabama, Arkansas and Mississippi, where food insecurity tends to be the most acute.

Alabama state Sen. Gerald Dial, a Republican, tried and failed this year to phase out the state’s tax on groceries over four years and replace it with a one cent increase in the overall sales tax, to 5 percent.

The tax, Dial said, is “the most regressive tax you can have and punishes those on fixed income.”

But removing it would leave a $650 million to $700 million hole in the state budget — a gap Dial’s proposed increase in the state’s overall rate on other goods was designed to cover. But his colleagues’ uncertainty over whether it would make up for lost grocery tax revenue helped doom the bill.

In Alabama, most of the sales tax goes toward education. And Nancy Dennis, spokeswoman for the Alabama Retail Association, noted that every time the sales tax goes up, retail sales go down. That worries both retailers and educators in the state.

“The kicker here is where the replacement tax revenue is going to come from,” she said. “Alabama, like many states, is in budgetary crisis. So if legislators take away revenue, it’s not going to help solve their problems in continuing to help fund the state.”

On the local level, Tim Swanson, a candidate for mayor of Daphne, a city of about 24,000 on the eastern shore of Alabama’s Mobile Bay, is running on a platform of eliminating the tax. It’s a position he took four years ago in an unsuccessful bid for the job because it is a “regressive tax.”

“It hurts the seniors, the poor, those on fixed incomes and now half the middle class,” he said.

He said the idea has made his opponents “panicky” over the prospect of lost revenue and a fear “we would have to get rid of policemen and firemen.”

Swanson said the city gets revenue from more than 50 sources of taxes and fees, and that any or several of them could be increased to make up for lost grocery tax revenue. Or, he said, the city could reduce spending somewhere else.

He also questions how effective the tax is because many people in Daphne drive across the Florida border to buy their food because that state has no tax.

Shoppers in other states also appear willing to drive to dodge the tax. A Wichita State University study published earlier this year found that Kansans living near the Colorado, Nebraska and Missouri borders often cross over to buy groceries, avoiding state and local taxes in their home state that can run as high as 10.5 percent.

Kansas lawmakers this year again discussed eliminating the tax before abandoning the idea in the face of ongoing budget shortfalls.

The grocery tax also is under review in Mississippi, where Republican Gov. Phil Bryant and legislative leaders put together a commission in July to study overhauling the state’s tax and spending structure.

“Every option, including reducing or perhaps eliminating the tax on unprepared food, will be thoroughly examined,” Bryant said.

In Idaho, a tax credit that offsets the state’s 6 percent tax on groceries for some low-income families has dampened the political will to eliminate the tax, according to House Majority Leader Mike Moyle. The tax credit, $100 per person annually, is available to people who have low incomes but who make too much to qualify for food stamps. Moyle, a Republican, would like to scrap the tax to give relief to a broader spectrum of taxpayers.

A decade ago, then-Utah Gov. Jon Huntsman, a Republican, signed a tax bill that he hoped would be his legacy. It included dropping the state’s sales tax on food from 4.7 to 1.75 percent.

Since then, according to Republican state Sen. Howard Stephenson, most residents haven’t even noticed that they pay less sales tax on food. At the same time, he said, the state’s tax revenue is more volatile. “And that’s not a good idea.”

“States ought to tax the one thing that everybody buys regardless of what the economy is doing so you can have the stability of revenue to provide income and social welfare benefits,” said Stephenson, who also heads the Utah Taxpayers Association. “It makes much more sense to give a food tax credit to low-income families, than it does to reduce the tax for those who can pay it without pain.”