A Shortage in the Nation's Maternal Health Care 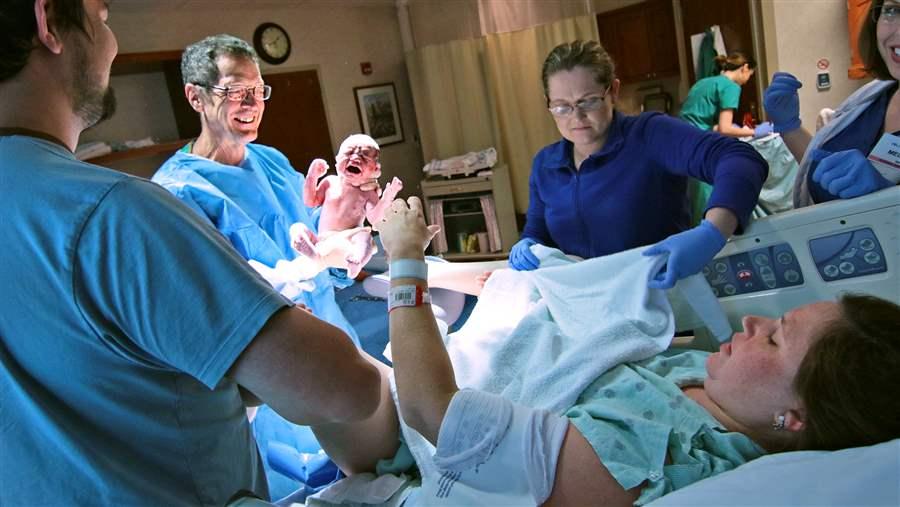 An obstetrician holds a newborn boy at AnMed Health Women’s and Children's Hospital in Anderson, South Carolina. The U.S. is experiencing a shortage in maternal health services, one that is expected to deepen in coming years.

Faced with a shortage of obstetricians and gynecologists and nurse midwives, several states are considering proposals that advocates say would improve health care for women.

But with the female population of the United States and number of babies born here projected to increase sharply over the next decade and beyond, scholars and medical organizations say more dramatic changes are needed to ensure that the medical needs of American women are met.

One possibility: easing restrictions on nurse midwives, who attend to labor and delivery and also provide routine primary and gynecological care for women of all ages. Other steps under consideration include offering financial incentives to encourage more medical professionals to specialize in maternal health care and to encourage them to locate in regions with extreme shortages, particularly in rural areas.

“It’s very simple,” said William Rayburn, a professor of obstetrics and gynecology at the University of New Mexico who has written on maternal health issues. “Our population is continuing to grow faster than we are producing ob-gyns.”

Nearly half the counties in the U.S. don’t have a single obstetrician/gynecologist and 56 percent are without a nurse midwife, according to the American College of Nurse-Midwives (ACNM).

“There are women in California who have to drive hours in order to see an ob-gyn,” said California Assemblywoman Autumn Burke, a Democrat.

The workforce shortage can have dangerous consequences, and may help explain why a relatively high percentage of American women die as a result of pregnancy, said Eugene Declercq, a professor of community health sciences at Boston University who has studied the ob-gyn workforce.

Burke is author of a bill in the California Legislature that would remove the requirement that nurse midwives practice under the supervision of doctors, a change that supporters say would boost maternal health services in underserved areas. There is a similar effort in North Carolina, and many other states have adopted those reforms over the last decade.

As restrictions have been lifted, the numbers of nurse midwives has risen. The number of nurse midwives has grown by 30 percent since 2012, according to the Bureau of Labor Statistics. But their overall numbers remain low, with about 11,200 in the whole country. There are about 20,000 ob-gyns.

Meanwhile, the American Congress of Obstetricians and Gynecologists (ACOG) is pushing measures in the U.S. Congress that would provide financial incentives to encourage medical school graduates to go into the field.

The United States has too few OB-GYNs and nurse-midwives to meet the maternal health care needs of American women. The American College of Nurse-Midwives says that 46 percent of U.S. counties have no OB-GYNs and 56 percent have no nurse-midwives. Here's a look at the obstetrical workforce in the U.S.

The number of women in the United States is expected to climb by nearly 18 percent between 2010 and 2030, and, with it, the number of births. The Centers for Disease Control and Prevention recorded 3.9 million births in 2014 and projects that number will rise steadily in the years to come, reaching about 4.2 million births a year by the year 2030.

The number of medical school graduates going into obstetrics and gynecology residency programs has remained steady since 1980, with about 1,205 residents entering the specialty each year, according to Thomas Gellhaus, ACOG’s president.

Most ob-gyns over age 55 are men. But women are almost equal in number in the 45-54 age group and outnumber men at the younger end of the profession. In 2013, more than four out of five first-year ob-gyns were women.

At the same time, Gellhaus and others familiar with workforce issues say, both women and men entering the field are less inclined to make themselves available around-the-clock in the way older practitioners did.

“The traditional model was that ob-gyns made this extraordinary commitment,” said Boston University’s Declercq. “I’ll be there for you, pre-natal, delivery and post-delivery. Women patients loved it, but today’s obs are looking for a better balance in their lives and don’t want to make that kind of sacrifice in their lives and their families’ lives.”

Those shifting attitudes have given rise to the growing use of “laborists” — ob-gyns or nurse midwives who do nothing but attend labor and deliveries in the hospital. That model leaves ob-gyns with time to concentrate on other maternal health issues. More than 250 hospitals now have a laborist on staff.

Another factor is the growing number of doctors entering obstetrics and gynecology who are choosing subspecialties such as gynecologic oncology, reproductive endocrinology and infertility, and female pelvic medicine and reconstructive surgery, further reducing the number available for routine maternal preventive care and normal deliveries. According to ACNM, 7 percent of ob-gyns residents entered a subspecialty in 2000. By 2012, the percentage had grown to 19.5 percent.

To help address the shortage, ACOG and other physicians’ groups are supporting congressional proposals to increase the number of medical residencies by 15,000 positions over a five-year period, with half of those designated for medical specialties in short supply, including ob-gyns.

The federal government spends about $15 billion a year on medical residency education, most of it by way of Medicare, the health plan for the elderly, and Medicaid, the state-federal partnership health plan for lower income Americans. It now funds about 30,000 residency positions a year.

Another proposal backed by ACOG would have the federal government designate obstetrical shortage areas in the country as it currently does with primary care, mental health and dental services. That would make ob-gyns and nurse midwives eligible for financial help with their education debts from the National Health Service Corps.

At least one state, Wisconsin, has begun an initiative to address the shortage. Starting next year, the University of Wisconsin School of Medicine will designate one resident in obstetrics and gynecology who will do at least a quarter of his or her training in rural areas with too few maternal health providers.

“The goal is to give them experience in these underserved areas because residents who train in certain settings are likely to locate their practices in similar settings,” said Ellen Hartenbach, an ob-gyn professor and residency program director at the Wisconsin medical school.

The program is the first to train ob-gyns in underserved areas, she said, and it has already attracted interest from medical schools elsewhere in the country.

Nurse midwives see themselves as part of the solution to the shortage of maternal health services, but they face some legislative hurdles if they are going to play a greater role.

Nurse midwives are registered nurses who also complete an accredited graduate school course of study in midwifery. Licensed (or its equivalent) in all 50 states, nurse midwives are trained in all areas of maternal health, usually can prescribe and administer medications, and they deliver babies, almost exclusively in hospitals or birthing centers. (Another class of midwives, called “certified professional midwives,” perform home births in the U.S., but they are licensed or statutorily authorized in only 29 states.)

In half the states, nurse midwives are permitted to practice independently.

But 25 states require them to practice under the supervision of a doctor or in collaborative arrangements with doctors. But the ACNM and its state affiliates have complained for years that many doctors are unwilling to take on midwives, denying women access to these maternal health care providers.

While ACOG opposes the restrictions on nurse midwives, other physician organizations, including the American Medical Association and many of its state affiliates, have continued to insist that doctor supervision of nurse midwives is essential to patient health.

In North Carolina, where 31 of 100 counties do not have an ob-gyn, nurse midwives must have signed supervisory agreements with a doctor in order to practice. Nurse midwives are fighting a legislative battle to remove the restrictions.

Suzanne Wertman, president of the state chapter of the ACNM, said few doctors are willing to enter into such arrangements because they regard the nurse midwives as competition or can’t afford the steep increases in their medical malpractice premiums such agreements would require.

John Thorp, Jr. a professor of obstetrics and gynecology at the University of North Carolina agreed that malpractice concerns discourage doctors from entering into those supervisory agreements with nurse midwives.

The ACNM says state Medicaid programs should pay nurse midwives at the same rate they pay doctors for performing the same services, and states should require hospitals to offer nurse midwives the same clinical and staff privileges, including hospital admitting privileges that they extend to physicians.

There is precedent for nurse midwives to play a larger role. In the U.S., physicians deliver 90 percent of the babies. But in other countries, midwives attend the majority of births. In England, for example, over half of deliveries are performed by midwives while ob-gyns concentrate on patients with higher risk pregnancies.

“That model has proven to work,” Declercq said, “and it just makes sense.”