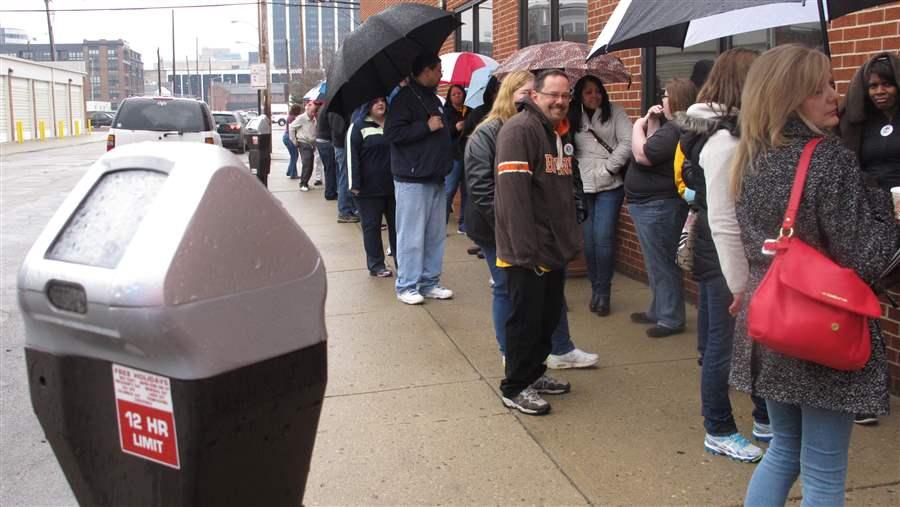 Adoptees wait outside the state Office of Vital Statistics to apply in person for their birth certificates and adoption records in Columbus, Ohio, last year. A number of states have passed laws giving adult adoptees access to their original, sealed birth certificates.

For many years, adults adopted as children who wanted to find out who their birth parents were ran up against a brick wall because they had no legal right to simply get a copy of their original birth certificate in most states.

But that’s been changing, as a growing number of states have been giving adult adoptees more — and in some cases, unrestricted — access to those records.

The shift reflects a move toward more openness in the adoption process itself, as well as the growing influence of adoptee rights groups, which have grown in number and become more vocal, putting pressure on legislators to act.

“We have the right to find out about our ethnicity, medical history, family information and culture,” said Erica Babino, legislative director for the American Adoption Congress, a nonprofit group that advocates for adoptees’ access to their birth records.

Decades ago, the birth records of adoptees were being sealed in most states to try to protect the confidentiality of birth mothers, particularly those who were unwed and faced the stigma of having a child out of wedlock. But advocates for adoptees say getting ahold of original birth certificates is a way to help them understand their backgrounds by revealing where they were born and their birth parents’ names and addresses.

Today about half of all states allow adult adoptees some form of access to their original birth certificate outside of going to court. In at least nine states — Alabama, Alaska, Colorado, Hawaii, Kansas, Maine, New Hampshire, Rhode Island (for those 25 and older) and Oregon — adult adoptees have unfettered access to those records, according to Nina Williams-Mbengue, who works on the issue at the National Conference of State Legislatures.

The Hawaii law was passed this year and took effect in June. At least two other states — Indiana and Missouri — enacted laws this year that make it easier for adoptees to access their birth certificates. But similar legislation failed in other states, including Kentucky and Louisiana.­

Legislators often don’t understand how deeply the issue affects adoptees and how many people’s lives can be enhanced by having birth parents and children they gave up for adoption make contact, said Pennsylvania Republican state Rep. Kerry Benninghoff.

“It’s easy to vote no about those things we don’t know much about,” said Benninghoff, an adoptee who unsuccessfully sponsored an open access bill three times and is trying again this session.

Opponents argue that birth records shouldn’t be opened to adoptees without the biological parents’ approval. They believe it’s a matter of privacy and protecting them from unwanted contact with their adult children.

Missouri Republican state Rep. Bill White, an adoptive parent, voted against an open access measure that became law this year. He said changing the law retroactively is unfair to birth parents who put their children up for adoption under a law that kept that information secret.

“These were the terms. There was anonymity. All of a sudden, we changed the rules.”

No Longer a Stigma

By the 1960s, adoptees’ original birth records in most states would be sealed by courts when a child was adopted, and replaced with an amended document with the adoptive parents’ information.

At one time, nearly every state required adult adoptees to get a court order to gain access to their original birth certificates — in about 25 states, that’s still the case.

But as attitudes toward adoption and women having children out of wedlock have changed, many states have modified their statutes. They have eased access for adoptees, although often with restrictions, such as delaying release for a certain period of time, redacting biological parents’ names, or requiring their consent before information is released.

“Even within a state, there are different judges who will open records and some who won’t,” said Babino, of the American Adoption Congress. “There’s no uniformity.”

In New Hampshire, which offers adoptees unrestricted access to their birth certificates, Stephen Wurtz, the state’s registrar, said he’s seen a lot of changes over the decades. “I’ve been here 32 years. We guarded those documents like they were the Mona Lisa. But after legislation was passed about a decade ago to open up those records, it gave us a whole new way of dealing with it.”

State records show 1,760 adoptees requested birth certificates from December 2004 through December 2015, and only 13 birth parents filled out forms saying they didn’t want to be contacted by the child they gave up for adoption.

In Ohio, the state opened its sealed records to adult adoptees in March 2015, making 400,000 birth certificates available, according to Melanie Amato, of the Ohio Department of Health. But if a birth parent had signed an opt-out form before that time requesting that his or her name be kept confidential, it is redacted from the document given to the adoptee.

As of March 2016, Amato said her agency had received 9,000 adoptee requests and issued about 7,800 birth certificates. It also got 259 requests for redactions from birth parents.

Many states have tried to balance the needs of adoptees and birth parents by setting up voluntary registries that can help connect the two parties.

Some states have established programs that use trained “confidential intermediaries” to discreetly reach out to birth parents or adoptees to see if they want to move forward with a reunion.

In some states, birth parents can decide whether they want to be contacted by an adoptee.

Opponents of unfettered access often favor those methods, saying they take into consideration both adoptees’ and birth parents’ rights.

In some states, Catholic organizations and groups that oppose abortion rights have fought measures to open birth records unless they offer protections for birth parents’ confidentiality.

They also say that unrestricted access could result in some women having abortions rather than putting children up for adoption because they didn’t want their personal information disclosed.

Open access supporters argue that laws already exist to protect birth parents — or anyone else — from being harassed or stalked. They say there’s no evidence that pregnant women would choose abortion over adoption because adoptees could one day get ahold of their birth certificates.

“Women don’t get pregnant and say, ‘I’m going to have an abortion because this person may find me.’ It’s almost an insult to women,” said Illinois Democratic state Rep. Sara Feigenholtz, who successfully pushed for changes in her state’s laws to allow easier access to birth records.

Feigenholtz, an adoptee, said she would have preferred for the bill she sponsored, enacted in 2010, to have granted adoptees unfettered access to their birth certificates. But she agreed to a compromise that allowed birth parents to request that their identities be redacted.

In recent years, advocacy groups that represent adoptees, such as the American Adoption Congress, the Adoptee Rights Coalition and Bastard Nation, have become more of a force in getting laws changed.

But others have tread more gently.

The National Council for Adoption, a nonprofit that advocates for birth parents, adoptive parents and adoptees, once thought that the laws didn’t need to be changed. But now it takes a “middle-of-the-road approach,” President Chuck Johnson said, favoring voluntary registries and confidential intermediaries.

The group is concerned that unrestricted access could violate the privacy of that small percentage of birth mothers who never told their families about the adoption or who became pregnant through rape or incest, Johnson said.

“They’re expecting their state to honor the conditions in place when they relinquished their children. It concerns me about the knock on the door.”

“My birth mother needed protection from society, but not from me when I became an adult,” she said. “That was the first thing she said to me when I found her in 1986.”