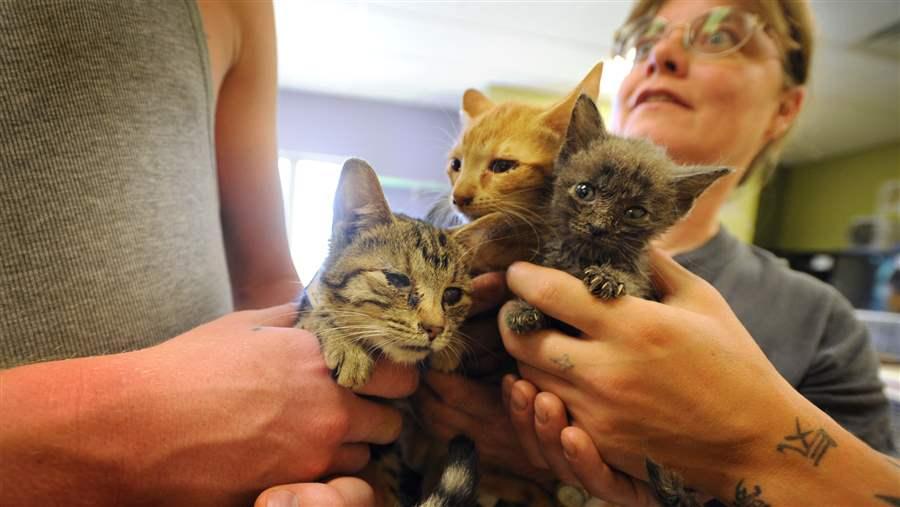 A Humane Society worker holds cats rescued from a home in Fond du Lac, Wisconsin. At least 165 cats were removed from the home. Hoarding animals can be a threat to people, as well as animals.

The stereotype of the crazy cat lady has some truth to it.

You know the character: The person who is struggling with trauma or mental illness, and has more animals than he or she could possibly provide for. Unneutered and confined to the house, the hoard multiplies quickly. The animals get sick, some die.

Reports of people hoarding animals are on the rise, driven partly by the attention social media and reality TV programs have focused on the public health and safety problem. And states and localities are finding themselves walking a fine line between criminalizing the compulsive behavior and helping people with the mental illness that underlies it.

The American Society for the Prevention of Cruelty to Animals (ASPCA) estimates there are between 2,000 and 5,000 new hoarding cases reported each year, with up to 250,000 animals involved. The average number of animals involved in a case is 50, the ASPCA said, though it also has seen instances in which more than a thousand animals were hoarded.

Each case poses potential health and safety concerns for the animals and people. Keeping too many pets can lead to neglect and inbreeding. People living in hoarding situations can get sick from excessive exposure to their pets’ waste. Large amounts of animals and clutter in a house can pose obstacles to escaping during an emergency.

In only two states — Hawaii and Illinois — is animal hoarding explicitly prohibited, according to the ASPCA; others rely on animal neglect statutes that prosecute hoarders for failing to provide adequate food, water, veterinary and other care.

But prosecutors are often hesitant to pursue these time-consuming cases because they require finding care for living animals and filing separate charges for each animal victim. So, groups like the Animal Legal Defense Fund (ALDF) are pushing states to adopt laws that could end hoarding in other ways.

This year, Idaho passed a law that allows judges to order a psychological evaluation for animal hoarders and the Alaska and Georgia legislatures passed measures to make people convicted of hoarding pay for the care their animals receive from rescue agencies.

In 2015, Oregon added animal crimes to its nuisance abatement law, a move Lora Dunn, a lawyer with the ALDF, hopes will be adopted in other states.

The law allows residents or business owners to sue people for violating the state’s animal neglect laws. It has only been in effect since January and has not been used yet, but the ALDF is primed to assist, Dunn said.

Prosecuting animal hoarding cases is important, Dunn said, because without long-term intervention animal hoarders are all but guaranteed to reoffend. They need to be monitored for future instances of hoarding, she said.

“We know without a shadow of a doubt that these folks will go on to harm animals in the future. So having that mechanism in place helps to prevent future suffering for those animal victims.”

But stopping animal hoarding cases is more complicated than just filing criminal charges and taking away beloved, though neglected, pets, said Randall Lockwood, a psychologist working on anti-cruelty projects at the ASPCA.

Prosecuting animal hoarders is equivalent to criminalizing a mental health disorder, he said. In 2013, “hoarding disorder” was added to the Diagnostic and Statistical Manual of Mental Disorders. It was linked to obsessive-compulsive disorder, addictive disorders and personal trauma, like the loss of a spouse.

Unlike people with obsessive-compulsive disorder, who are typically aware that their behavior is unusual, hoarders often cannot acknowledge their problem.

“They believe that the animals love them for whatever care they give and often it is extremely inadequate care, but that is not the way they perceive it,” Lockwood said.

Many animal hoarders he has encountered suffered abuse as children and had parents who were alcoholics or drug addicts. Often, they were looking to pets to fill the void of human bonds.

That attachment persists even after the animals are dead, he said, pointing to a case in which an animal hoarder in Virginia made individual coffins for his “dozens and dozens” of cats, keeping their remains in a shed.

“The reality is animals can be great companions, but they’re not the equivalent of people,” Lockwood said.

And that’s why traditional criminal sanctions don’t work for hoarders, he said, adding that hoarding-specific laws, like Hawaii’s and Illinois’, are unnecessary because existing neglect standards already cover situations that cause pain and suffering to animals.

States, mental health experts and animal rights advocates should instead focus on harm reduction and helping hoarders manage their compulsion, which is unlikely to be cured, he said.

“Just going in and taking away their stuff, removing the animals and then thinking, ‘OK, the case is over’ — that’s never a solution because you haven’t gotten to the base of the problem.”

Rather than criminal penalties on hoarders and banning them from having pets, Lockwood said it would be better to leave a few healthy animals in their care for long periods of probation. That would give mental health and animal control officials legal recourse to check up on them.

Robin Zasio, a California psychologist who has appeared on the A&E show “Hoarders,” said most state and local laws that can be used to prosecute hoarders are loose and don’t address animal cruelty until it becomes extreme.

“Many people have more animals than their land” is legally approved for, she said. “But if they’re taking care of them, no one actually cares.”

Animal hoarding would be better addressed by enforcing city-level limits on animals, she said. Officials could tell a hoarder that they have a certain amount of time to surrender a portion of their hoard, ultimately facing repercussions if they do not comply.

But local agencies and county case workers are not equipped to solve the underlying problem that leads a person to hoard animals, she said. That requires therapy and teamwork, a task Zasio spends at least six weeks working on with her hoarding clients.

In Arizona, preventing hoarding is a matter of creating more concrete requirements for providing food, water and shelter as well as increasing penalties for neglect, said Christopher West, who oversees animal cruelty cases for the Arizona Humane Society. Improving these standards would make it easier to address animal neglect before it gets out of hand, he said.

“Right now in Arizona, if you have a measuring glass of water in your backyard, so long as there’s a little bit of water for the animals, it’s legal.”

While the characterization of the crazy cat lady has some ring of truth, Lockwood points out that hoarding is a disorder that crosses cultures, ages and genders.

Hoarding can occur in families or couples, he says, and hoarders often appear well outside the home — many of them are professional caregivers, such as teachers and nurses.

West said he’s seeing more hoarding cases in the six Arizona jurisdictions he covers. But he attributes that increase to more awareness about hoarding.

Hoarding has become so widely talked about that most major cities have a hoarding task force. And the FBI started to track animal cruelty this year in part because it can be an indicator of larger crime.

Lockwood said increased awareness of the problem is probably a good thing.

“Grandma has 15 cats, two of them don’t look so good,” he said. “If we can help out in that, that’s a lot better than waiting until we have 200 cats [and] most of them need to be euthanized because they’re so sick.”