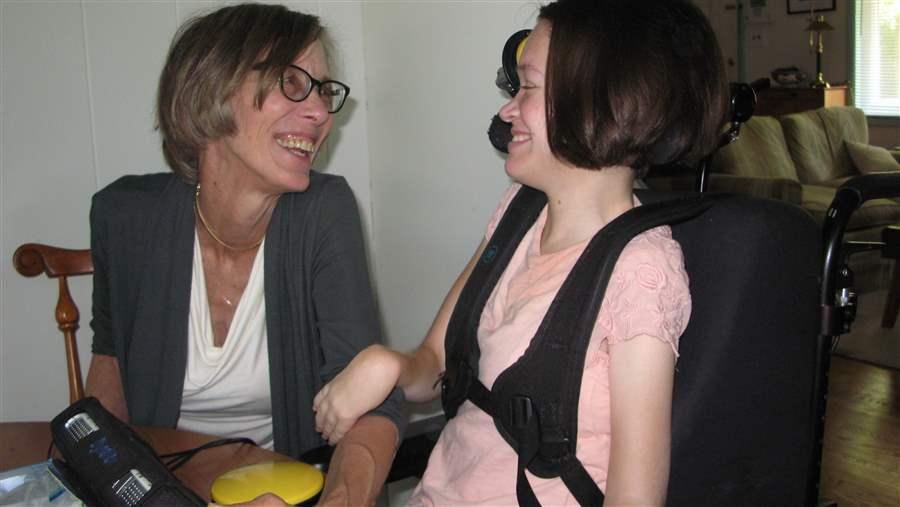 Beth and Caroline Munro laugh as they play on Caroline’s communication device at the kitchen table in their home. Beth Munro is one of many caregivers over 60 in the U.S. who are waiting for the person they care for to get more Medicaid services.

ROCKVILLE, Md. — Ever since she was 4, when a caregiver force-fed her with a spoon, Caroline Munro has not let anyone feed her but her mother.

The 22-year-old has cerebral palsy and an intellectual disability. She doesn’t speak and functions at a preschool level. Her mother, Beth Munro, feeds her with a fork or her hand.

As Beth ages — she’ll be 68 in October — she wonders who will care for Caroline when she’s no longer around. But she may never know. Caroline is on a Maryland waiting list for additional Medicaid services for the disabled. The list is thousands of names long, and as in many states, names often stay on it until a caregiver falls ill or dies.

About 860,000 people over 60 nationwide are in Beth’s place, caring for someone with intellectual or developmental disabilities in their home. And many are waiting, sometimes for years, for state-provided Medicaid help for their disabled child, sister or brother, such as placement in a group home, day services, or transportation or employment programs. If they can’t afford to pay for these services on their own, under the federal-state Medicaid system, their relative could end up in an institution.

As the number of older caregivers grows, and their need for help becomes more dire, a few states have passed laws to give older caregivers a chance to help decide where, and how, the person they care for will live. Tennessee passed a law in 2015 to ensure that anyone with an intellectual disability and a caregiver over 80 got the services they needed, and this year the state expanded the law to those with caretakers over 75. And in 2014, Connecticut passed a similar law that is helping about 120 people with a caregiver over 70.

But the waiting lists for needed services in these states and many others are still thousands of names long. In recent years, states such as Maryland, Virginia and Pennsylvania have put money into their budgets to try to chip away at the lists, and they get federal matching dollars to help pay for it. Some states are prioritizing people with urgent needs, while others are prioritizing students as they age out of school.

Yet advocates for people with disabilities, such as Nicole Jorwic, director of rights policy at The Arc, a national nonprofit, say there needs to be a federal fix.

“Something that pumps money into the system,” Jorwic said. “And that’s just not going to happen in the current climate in Congress.”

In Maryland, Beth Munro realizes that unless she becomes seriously ill or dies, her daughter might not be placed in a group home.

“I’ve worked really hard at the issue over the years,” Beth said, “and you get nowhere.”

In 2013, spending for community- and home-based services surpassed spending for large institutions, such as mental hospitals and nursing homes, for the first time. By that time, 14 states no longer had any large state-run institutions for people with intellectual or developmental disabilities, and many others had only a few, according to University of Colorado research.

The move to deinstitutionalize care has provided care that is more personalized while also saving states money. Average costs for care in a state-run institution, in 2013, ranged from about $129,000 a year in Arizona to about $603,000 in New York, while the average state costs of community-based services nationally is $43,000, according to the University of Colorado.

What this has left, though, is fewer residential options, and lengthening waiting lists. About 198,000 people were waiting for home- or community-based services in the 34 states that reported data in 2013, according to University of Minnesota research. The longest waiting lists were in Ohio (41,500), Illinois (23,000) and Florida (22,400).

But April Lopez, chairwoman of California’s State Council on Developmental Disabilities, said that’s not always the case there. Some services aren’t available when you need them, she said. The state’s reimbursement rate is so low, she said, it discourages doctors and health centers from providing services.

If states aren’t able to provide services for everyone, they should focus on providing more support for family caregivers, such as high-quality case management and respite services, said Susan Parish, director of the Lurie Institute for Disability Policy at Brandeis University in Massachusetts.

With medical, technological and public health advances, people with disabilities are living longer than before, Parish said. And with family size shrinking over the years, fewer siblings are around to assume care of their brother or sister as their parents age.

Caregivers need help transitioning out of their role — finding the person with disabilities a place to live, money, benefits and a new guardian, Parish said.

“I’ve worked with several parents who said they’ve hoped their son or daughter would die before they did because they don’t feel there are supports out there,” she said.

Some Steps in Some States

Beth Munro said she has felt that way, at times. She said she has been caring for Caroline on her own since she was 9 months old. Caroline has a brother and sister, but they live out of state and Beth doesn’t want them to have to take over her role. Caroline’s cerebral palsy affects both of her arms and legs. She is dependent for all of her care and can’t be left alone.

But her laugh is full of life, and she laughs often. Her mother says she is generally a happy person. She is in a day program with other adults with disabilities, and they often go out into the community, like to a nature center or to the movies.

Under Maryland law, people with intellectual or developmental disabilities who are transitioning out of the school system at age 21 receive some services. Yet 7,600 people on the waiting list in Maryland either have no services or need more.

Last year, Gov. Larry Hogan, a Republican, added $3 million to the budget, which served about 120 people who were deemed to be in crisis, and added $3.5 million this year for the same purpose.

This has been a bright spot in a decadeslong fight by the Maryland affiliate of The Arc to educate people and get more funding, said Cristine Marchand, its executive director.

In the past, the organization would suggest a new tax in the state to cover the expenses — a tax on snacks or telecommunications — and each time the governor at the time would take the money and use it for something else, Marchand said.

Whether a state makes progress addressing the issue has less to do with the political party in power and more to do with how much officials know about the issue, or how much influence advocates have, said Bernard Simons, Maryland’s deputy secretary for developmental disabilities.

Simons has worked in similar jobs in five other states and he said it’s the same wherever he goes — parents dying or getting sick, and children left with no plan in place.

States, including Maryland, need to be planning more, he said, instead of just reacting to emergencies.

In Pennsylvania, which has one of the largest waiting lists — about 13,800 people — Republican state Rep. Thomas Murt said he has several bills pending in the Legislature that would collect money specifically to provide services for the people on the list using different taxes, including on natural gas, tobacco, and vaping.

Like Maryland, Pennsylvania provides services for students transitioning out of school — about 700 a year. But sometimes it takes an older caregiver falling ill to get help, Murt said. “If another state is doing a better job, I think we should take a look at what they’re doing.”

Courts have ordered some states to provide more community-based services.

Virginia is making big changes to how it serves people with disabilities because of a 2011 settlement with the U.S. Department of Justice, which found that the state was needlessly keeping people in institutions and failing to provide enough community-based alternatives.

The state agreed to close down four of its five large institutions and serve 4,170 new people with community-based supports by 2021.

In Tennessee, The Arc Tennessee, an affiliate of the national group, pushed the Legislature to help older caregivers.

And, because these people have gone without the state’s help for so long, the Legislature wanted to help, said state Rep. Bob Ramsey, a Republican who advocated for the state’s new law.

“I felt it really appropriate for us to do something to give them some relief and some assurance that they weren’t going to have children, loved ones or friends that were assigned to institutions,” Ramsey said.

The state plans to provide new home- or community-based services to 1,700 people — compared to the 100 or 200 people it has been helping in recent years — on the waiting list this budget year, according to a spokeswoman, Sarah Tanksley.

Hope for an ‘Active Life’

In Maryland, Beth Munro has struggled for years to care for her daughter on her own. She said it’s tough to find the strength to lift her daughter in and out of the bathtub every night.

But later this month, she’ll be getting extra help. The state just approved 35 hours of in-home services for her, including for bath time.

Still, she hopes her daughter can move into a group home soon, so she can start to learn to live without her mother and do the kinds of things she likes, such as sewing, taking photos and dancing in her wheelchair — with help from others.

“That’s the main thing,” Beth said. “Not only that she’s well taken care of, but that she has an active life, doing things that she likes to do.”