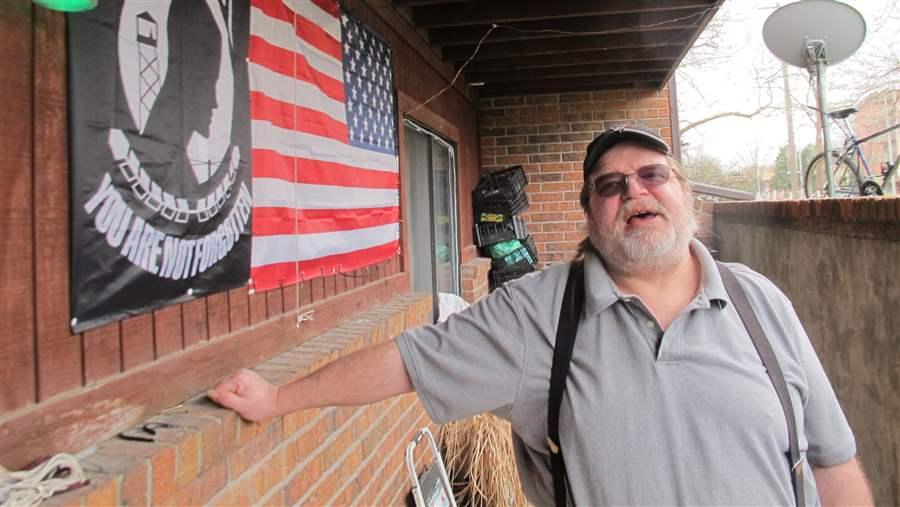 Ronald Tillman, a Navy veteran in Lincoln, Nebraska, spent three years in prison for selling morphine pills to a police informant, and is now ineligible for food stamps despite conditions that have made it hard for him to work. Nebraska is among a dwindling number of states that still enforce a lifetime ban on drug offenders receiving food stamps.

ATLANTA — Twenty years after a federal law blocked people with felony drug convictions from receiving welfare or food stamps, more states are loosening those restrictions — or waiving them entirely.

In April, Gov. Nathan Deal, a Republican, signed a criminal justice reform bill that lifted the ban on food stamps for drug felons in Georgia. Alaska followed suit in July, although applicants must prove they are complying with parole and are in treatment for substance abuse. And in Delaware, a bill to lift cash assistance restrictions for drug felons passed out of committee in June. The legislative session ended before the bill could be put to a vote.

The changes come amid broader efforts in Washington and many states to reform drug policies and criminal justice approaches. And they reflect a growing consensus that helping people when they are released from prison can increase the chances that they don’t end up going back.

“Most have a hard time getting a job and initially need to rely on public assistance. And food is a basic primary way they need help,” Meyers said.

The federal ban was established in 1996, a product of the tough policies of the “war on drugs” and sweeping welfare reform that restricted recipients to no more than five years of government assistance in most states and required most recipients to work, do community service or enroll in vocational training.

It prohibits those convicted of felony drug crimes — but not other felonies — from receiving food stamps and cash assistance, but states have the option of relaxing those rules.

States have been more reluctant to lift their restrictions on cash assistance, known as Temporary Assistance for Needy Families; but at least 11 states and the District of Columbia have done so, according to the Congressional Research Service.

Despite the movement to loosen the ban, some critics object to making the change at a time when states are being forced to slash their budgets.

“States should be looking for ways to shrink the welfare rolls and tighten eligibility requirements to families legitimately working to get back on their feet,” said Texas state Rep. Matt Rinaldi, a Republican who last year voted against lifting the state’s food stamps ban. “Expanding welfare benefits to convicted drug dealers and drug felons is a giant leap in the wrong direction.”

But Georgia state Rep. Rich Golick, a Republican who supported lifting the ban in his state, said the ban didn’t make sense on a number of levels.

“You had individuals who were coming out of the system convicted of a violent crime who had the eligibility to apply for food stamps whereas someone who went in on a drug charge, including possession, didn’t have that ability.

“You’re increasing the chances that they may reoffend because they don’t have the ability to make ends meet. Doesn’t this go against what we’re trying to achieve as they re-enter society?”

About half a million people in the U.S. are incarcerated with a felony drug conviction. Most are not high-level drug dealers and have no prior criminal record for a violent offense, according to a 2015 report by the Sentencing Project, which advocates against racial disparities in sentencing and for alternatives to incarceration.

Sixteen percent of people in state prisons are being held on felony drug offenses; in federal prisons that number is close to half, according to the report.

Proponents of lifting the restrictions say the bans target poor people and minorities and drive people further into poverty, sending them in and out of federal and state prisons. A 2013 study by the Yale School of Medicine found that 91 percent of people recently released from prison didn’t have reliable access to food.

“One of the best ways that someone can move on after they’ve been released from prison is their ability to eat and take care of themselves,” said Marissa McCall Dodson of the Southern Center for Human Rights.

As states grapple with reducing their burgeoning prison populations, many are looking for ways to help former inmates as they return home.

“A lot of legislatures are starting to see it’s not beneficial to have these flat bans and indefinite restrictions imposed on people,” Meyers of the Legal Action Center said.

By 2001, eight states and the District of Columbia had completely opted out of the food stamps and cash assistance bans, while another 20 states had modified them, according to the Sentencing Project.

More rural states are less likely to lift the bans, because they aren’t as affected by large numbers of people with drug records being released into their communities, Meyers said. “The struggle is very different from urban centers if they’re moving back to rural towns where everyone knows them.”

Today, about a dozen states still ban felons from receiving welfare payments. About half of all states have modified the ban in some way.

At least four states — Maine, Minnesota, Pennsylvania and Wisconsin — have recently modified the cash assistance ban to require those with a drug record to undergo drug testing in order to receive cash assistance, according to the National Conference of State Legislatures.

“There are higher hurdles to clear” to lift cash assistance bans, said Nicole Porter, director of advocacy for the Sentencing Project. “And that’s more about welfare and anti-welfare sentiment in this country.”

Georgia has the country’s highest correctional control rate — that is, the share of people who are either incarcerated or on parole or probation. Each year, about 10,400 people are released from state custody with drug felonies, according to the state Department of Corrections.

Before the ban was lifted, approximately 555 Georgia residents were denied food stamps each month because of a drug felony, according to a report by the Georgia Budget and Policy Institute (GBPI), a nonpartisan research group, and the Pew Charitable Trusts (Pew also funds Stateline). Their children and anyone else in their household could receive benefits.

And each year, because of the ban, the state was losing as much as $10.4 million in federal food stamps, the study found. The federal government pays for food stamps through block grants to the states but splits the administrative costs with states.

“Once legislators understood that these are federal dollars that we are ignoring — that was a big selling point in modifying the food stamps ban,” said Melissa Johnson, senior policy analyst for the GBPI.

Doug Ammar, executive director of the Georgia Justice Project, a legal services nonprofit that lobbied to lift the welfare restrictions, recalls an elderly client who applied for benefits a few years back. The man, who’d served time for a drug conviction in the ’60s, moved a few miles across from the state line, from Florida to Georgia, and found that his change of address meant he could no longer receive food stamps.

“That [drug] record can haunt you and have real-life implications. It’s a lifetime of punishment,” Ammar said. “How long should your brush with the law impact you and your family?”