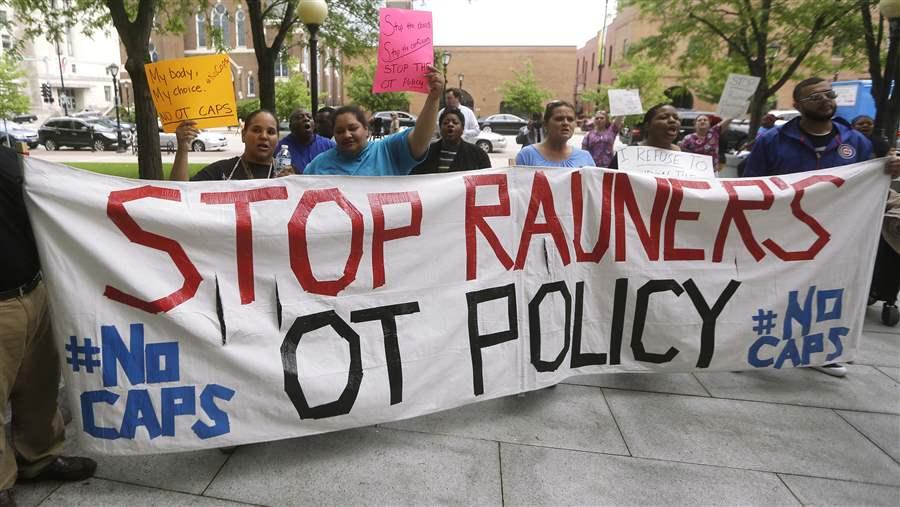 Take divided government, mix in red-hot tax issues, sprinkle with partisan politics, build on a base of pension liabilities, structural deficits and a dash of Great Recession hangovers, and you have the noxious stew that created record-setting budget standoffs this year in Illinois and Pennsylvania.

In both states, the animosity between legislatures controlled by one party and governors of the opposite party rose to a rolling boil. Pennsylvania’s impasse finally came to an end in March, although most big issues were left unaddressed. On June 30, Illinois lawmakers approved a $50 billion stopgap plan that will allow schools to open in the fall and fund colleges and human services programs for six months, but it does not include money for other state operations.

In both states, the effects of the budget fights ranged from the critical to the inconvenient to the absurd. It seemed like every week there was another real or threatened impact — from closing schools, reducing college scholarships and cutting mental health services to eliminating license plate renewal reminders, cutting assistance for low-income burials and delaying payments to lottery winners, to name a few.

To get through the first half of the school year, Pennsylvania school districts and the vendors and contractors that serve them borrowed about $1 billion, resulting in up to $50 million in interest and fees, according to state Auditor General Eugene DePasquale. In Illinois, staff at mental health facilities struggled to keep their doors open.

But what didn’t happen was as significant as what did. Tens of thousands of state workers didn’t suddenly appear on the unemployment rolls, nor did hundreds of school buses sit idle in parking lots while children romped endlessly in backyards. Some believe that leaving these big-ticket areas unfunded would have forced timelier compromises.

“There’s no doubt it’s a double-edged sword, because it doesn’t bring everything to a head quicker,” said Pennsylvania House Majority Leader Dave Reed, a Republican.

“If the state had shut down, you better believe we would have had a budget by now — and everybody knows it,” said Illinois Sen. Toi Hutchinson, the Democratic chairwoman of the Revenue Committee. “We can’t even shut the state down right.”

Illinois Gov. Bruce Rauner, a Republican, and Pennsylvania Gov. Tom Wolf, a Democrat, are wealthy businessmen who put millions into their own 2014 races. Both of them campaigned as outsiders and pledged to shake up the establishment. But Rauner and Wolf quickly discovered that the top-down governance of the business world doesn’t necessarily work with legislative bodies — especially when the other party has the majority.

Despite Pennsylvania’s $50 billion unfunded pension liability in 2014, Wolf campaigned against scaling back pensions. Instead he called for a tax on hydraulic fracturing, which would also raise $1 billion for schools. That appealed to voters who had seen school funding cut by his predecessor, Republican Tom Corbett. Wolf also promised to address the state’s $2 billion structural deficit.

Legislators sparred with Wolf over the budget deficit and the pension system, as well as taxes and school funding. There were other polarizing issues, too, including privatizing liquor sales and lowering property taxes.

“Everyone starts with the attitude that we’re going to get things done,” said Pennsylvania Senate Majority Leader Jake Corman, a Republican. “But it soon became all fight, fight, fight, as the governor tried to get everything done in the first year.”

The situation was exacerbated by the fact that Pennsylvania is recovering very slowly from the Great Recession, leaving tax revenue lagging.

Apparently chastened by the previous stalemate, lawmakers quickly approved the $31.5 billion plan for 2017 — and the taxes needed to pay for it. The tax package Wolf signed last month will raise nearly $1.3 billion with a $1 increase in the $1.60-per-pack cigarette tax and a new tax on lottery and table games winnings. The measure also allows the sale of liquor on Sunday and wine in grocery stores.

“In retrospect, could we have ended the budget impasse last June the way we finally ended it this April? Yes, we absolutely could have,” said Reed, the House majority leader.

After he let the 2016 budget take effect without his signature, Wolf repeatedly accused lawmakers of postponing hard decisions. “I think all sides share the goal of moving the commonwealth forward, but we have to come up with solutions to really address our issues.”

“We have a very polarized Legislature, more than in any time in modern history,” said G. Terry Madonna, director of the Franklin & Marshall College Poll. “We elected a liberal governor and an even more decidedly conservative Legislature and never the middle shall meet.”

In Illinois, party control is reversed, but the polarization is similar to Pennsylvania’s, if not worse. Rauner, a venture capitalist, pledged to disrupt the “entrenched” Democrats in the Illinois General Assembly, reform union bargaining rules, change the workers’ compensation system, modify regulation of business and reform tort law.

Rauner spent $28 million of his own money on his campaign and enraged Democrats by putting $20 million into the Republicans’ campaign fund ($10 million of his own and $10 million from two friends) after he was elected to help move his agenda. He also had his allies help fund a primary challenge to veteran House Speaker Mike Madigan. The challenger, Jason Gonzales, lost nonetheless.

The General Assembly — where Democrats outnumber Republicans 39 to 20 in the Senate and 71 to 47 in the House —has worked with Republican governors in recent history, including Jim Edgar and George Ryan in the 1990s. But Rauner is different. He came in riding a wave of what he thought was a mandate to change things with his pro-business agenda.

He also allowed a 2011 temporary income tax hike to expire, dropping it from 5 to 3.75 percent. The corporate tax fell from 7 to 5.25 percent. These changes, along with the delayed budget, resulted in the state spending $500 million more than it takes in every month, creating an estimated $6.2 billion budget gap in 2016.

Democratic lawmakers bristled at Rauner’s actions. “If you have a supermajority in one party and the governor of another party, the things that you want or hold hostage before you approve a budget have to be within reason; something you can expect the people in the other party to vote for,” said Senate President John Cullerton, a Democrat.

“There’s a real lack of trust between players,” said Illinois Sen. Heather Steans, another Democrat. Rauner’s perceived attacks on unions and state employees unified the Democratic constituencies against him, she said. “You consolidate them all against you, so it becomes a war, rather than an effort to compromise.”

Republican Rep. Patti Bellock, a Rauner supporter, said the governor stuck with his reforms “so he can face the people who put him in office wanting to change this state.”

“Rauner represents change, a business approach,” said David Yepsen, director of the Paul Simon Public Policy Institute. “But he has no background in elective office and has … made a lot of enemies in the beginning — you can’t do that in Illinois.”

Rauner admitted things have not gone the way he envisioned.

“We knew change would be hard, but we didn’t know it would be this hard,” the governor said. He blames the “entrenched politicians,” who he says have run the state badly.

As the deadline for passing the fiscal 2017 budget without a three-fifths majority expired June 1, there was political sniping in all directions in Springfield. Democrats were pitted against Democrats over a stopgap education funding bill that some suggested was a “giveaway” to Chicago schools, while Republicans and Democrats continued to blame each other for the impasse.

Of the registered voters surveyed by the Paul Simon Institute, 84 percent said the state was on the “wrong track.” Rauner’s disapproval rate jumped from 31 percent in early 2015 to 50 percent this year. The poll did not ask about the General Assembly’s approval rating.

With the two sides unwavering in both states and solutions evasive, the Paul Simon Institute’s Yepsen turned to humor.

“My solution for the problem in both Illinois and Pennsylvania is that the two states swap governors,” he says. “They are both well-to-do, and they’re both Dartmouth graduates.”