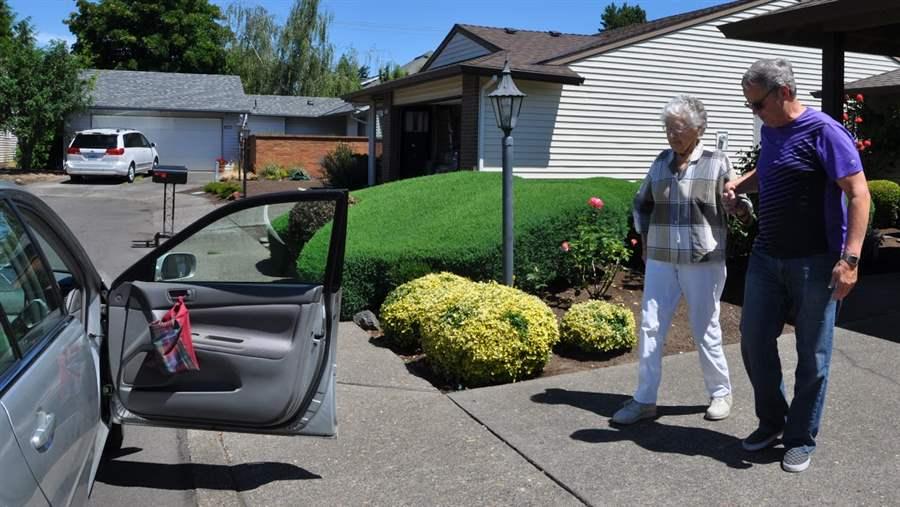 Bob Yohn, a volunteer driver for Ride Connection, a nonprofit, helps Helen Conner to his car in Tigard, Oregon, before they head to her dentist’s office. Some states have passed laws protecting volunteer drivers from higher insurance rates.

Many of the nation’s seniors depend on volunteers to shuttle them to grocery stores and doctor’s appointments. And as tens of millions of baby boomers grow old in the coming decades, even more seniors who no longer drive and don’t have access to public transportation will need help getting around.

But advocates say some would-be volunteer drivers shy away because they fear their insurance rates would spike or their policies would be canceled. They also worry they’d be vulnerable to lawsuits in the case of an accident or injury.

Some states have passed laws aimed at protecting volunteer drivers. But questions remain in many other areas about whether volunteers are protected from liability, or need to purchase enhanced insurance.

All of this uncertainty makes it harder to recruit volunteers, said Helen Kerschner, director of the National Volunteer Transportation Center, which provides assistance to volunteer driver programs. “These programs are important because they help people who are homebound or trying to age in place who aren’t able to access services,” she said.

At least five states — Florida, Illinois, Maine, New Hampshire and Vermont — bar insurers from raising rates, imposing surcharges or canceling someone’s policy solely for being a volunteer driver. (In a sixth, California, the law applies only to canceling a policy.)

Maryland passed similar legislation this year, which goes into effect in 2017, and another measure in Delaware is awaiting Democratic Gov. Jack Markell’s signature.

Maryland state Del. Mark Chang, a Democrat, volunteered for a local nonprofit to ferry seniors to grocery stores and dialysis appointments in his Honda Civic. He often heard from other volunteers who were worried their insurance premiums would go up.

He said he sponsored his state’s legislation to ease those concerns and prompt others to volunteer. “I hope it will help remove any obstacles or fears that people may have using their own vehicles to volunteer.”

Maryland’s law and others like it don’t prohibit insurance companies from raising volunteers’ premiums if they drive many more miles. Nor do they protect volunteer drivers if they’ve been negligent or committed willful or reckless conduct.

Robert Passmore, an assistant vice president of the Property Casualty Insurers Association of America, said his trade group, whose members write more than 40 percent of auto insurance policies, doesn’t oppose legislation such as Maryland’s as long as it includes those restrictions.

“If a law says you can’t cancel or raise rates solely because you’re a volunteer driver, we’re fine with that,” he said. “But if you drive a lot more miles or get into a lot of accidents, that should play into how your policy is priced.”

But not everyone in the insurance industry supports such measures.

W. Minor Carter, a lobbyist for the American Insurance Association, whose members sell auto insurance, in February testified against the Maryland bill, saying it was unnecessary because insurers aren’t discriminating against volunteer drivers.

Carter warned the legislation could open the door to anyone claiming he was a volunteer driver. “Now is everybody going to come in to get an exception, to say we’re protected?” Carter said.

Volunteer driver services for seniors and the disabled are popping up all over the U.S. At least 800 organizations — mostly community-based and faith-based — run programs in 37 states, according to the National Volunteer Transportation Center. About 74,000 people volunteered to drive nearly 471,000 passengers in 2015.

Volunteer driver programs are essential to allowing older people who no longer drive and can’t afford taxis or ride-hailing companies, such as Uber or Lyft, to age in their homes, Kerschner said.

“You need to be able to get out and go to the grocery store and doctor’s appointments and other places,” she said. “When people are isolated, depression sets in.”

In many of the programs, drivers pick up passengers at their door, stay at the destination, make multiple stops and carry packages into their house. Drivers in one New York City program even make cemetery visits.

The programs take many forms. Some use only volunteers; others also have paid drivers. Most volunteers are unpaid, but many get reimbursed for mileage. Many programs offer passengers free rides, but accept donations. Some charge a fee. And many volunteers, often seniors themselves, drive their own cars.

A 2011 report by the National Conference of State Legislatures (NCSL) and AARP found “significant legal ambiguities” surrounding volunteer driver programs, especially when it comes to liability. Some agencies were unsure whether they were liable for accidents involving their volunteer drivers and needed to extend their insurance coverage. Some volunteers reported that insurance agents required them to carry more insurance to cover the extra use of their cars for volunteer activities.

Only a handful of states explicitly protect volunteer drivers from liability.

In states where laws don’t address the issue, the situation facing volunteer drivers is less clear. The report said “a strong legal argument” could be made for volunteers in those states to be immune from liability as long as their actions are in good faith and without malicious intent.

Kerschner maintains the problem isn’t the state liability laws; it’s that some insurance agents and nonprofits are misinformed and mistakenly believe volunteer drivers would be liable for accidents or injuries. She said most — but not all — volunteer driver programs carry additional insurance that protects them and their drivers from liability. That means drivers can be protected from an out-of-pocket loss if their own policy isn’t sufficient to cover a claim.

William Henry, executive director of the Volunteers Insurance Service Association Inc., which insures nonprofits, said his group strongly recommends that agencies buy the additional coverage. Doing so helps nonprofits recruit and retain volunteers, Henry said. “They tell the volunteer that we have this policy to back you up if you’re worried about what might happen if you’re in an accident and you’re at fault and your personal policy isn’t enough.”

But sometimes having such a policy isn’t enough to avoid headaches for volunteers, said Elaine Wells, executive director of Ride Connection, a Portland, Oregon, nonprofit that gave rides to more than 17,000 seniors and people with disabilities last fiscal year.

Wells said her nonprofit covers its more than 350 unpaid volunteer drivers under an excess liability policy and they don’t need to buy additional insurance. Even so, she said, over the years, she’s had to advocate for some whose insurance agents have tried to pressure them to buy commercial insurance. Ultimately, the insurers backed down.

The situation can be even more complex for organizations that charge their passengers to help cover the cost of the ride.

It’s a challenge for ITNAmerica, a nonprofit transportation network with affiliates in a dozen states that have about 500 volunteer drivers and up to 50 paid drivers.

Katherine Freund, the group’s president, said some states consider it a “livery service” — transporting people for pay, similar to Uber and Lyft — and view the drivers as being “for-hire.” Livery requirements vary from state to state, she said, but for her organization, they could mean being forced out of the market or needing to purchase much more costly insurance or applying for licenses intended for traditional livery services.

The network, which has about 5,000 members, shouldn’t be considered in the same category as for-profit companies because it serves the common good and isn’t trying to make a profit, Freund said. Passengers pay annual membership fees ranging from $40 to $75, she said, and fares average about $12.

“ITN wanted people to have true freedom of choice and true mobility,” Freund said, noting that her group’s services are available to seniors 24/7 for any purpose. “God forbid an older person wants to go play bridge rather than go to the doctor.”

Several states have exempted nonprofits that give rides to seniors from livery laws.

Freund hopes other states will follow their lead, and warned that treating nonprofit volunteer driver programs the same as for-profit ride-hailing companies will only hurt seniors in the end.

“These services are huge,” she said. “Without them, older people are stranded.”