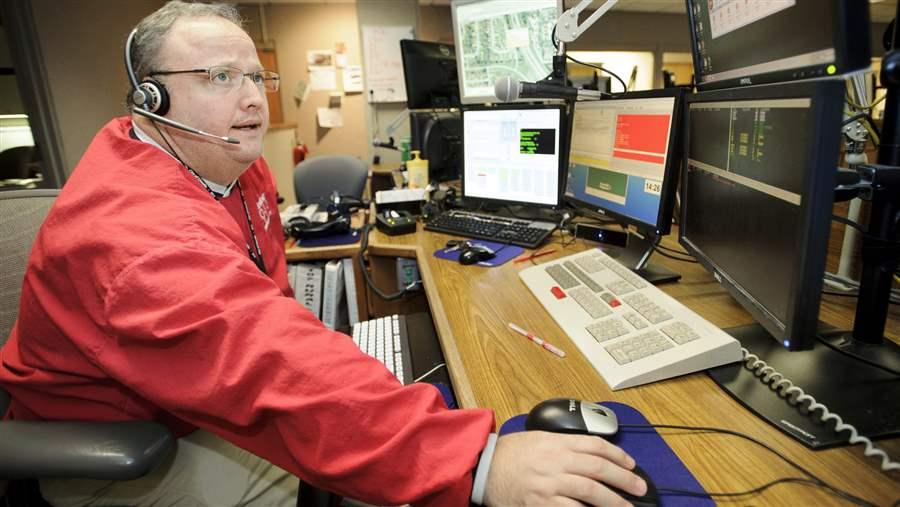 Like most 911 systems in the U.S., Orlando’s emergency communication center cannot receive text messages, photos or videos. Nor can most 911 systems tap into other mobile device features, like detailed location services.

Texting 911 could be valuable in emergencies like the Orlando shooting or a domestic violence incident, where it is unsafe to make any noise let alone talk out loud about the danger at hand. And sending text messages to 911 could allow people who are deaf or have speech impairments to communicate without other special devices.

So far few states and cities have adopted 911 texting, but that will change over the next several years, as utility companies abandon old copper phone lines for fiber optic cables.

That transition, which phone companies say they want to complete by 2020, is also forcing states and cities to cut their traditional emergency phone networks in exchange for Internet Protocol networks, which can send digital voice, photo and video information over the internet.

A speedy transition is critical, in part because 70 percent of 911 calls are now made with wireless phones that cannot be accurately routed with existing technology. Upgrading the 911 infrastructure would enable emergency responders to get to callers faster and receive detailed information, like video from a crime scene as it happens. Some proponents of the transition say it could also save local governments money by consolidating call centers on a statewide or regional network.

The National Emergency Number Association (NENA), which represents government agencies and private firms involved in the emergency system, and the National 911 Program, housed in the U.S. Department of Transportation, are pushing states and localities to adopt what they call Next Generation 911.

The cost of making the switch will vary by jurisdiction, but major metropolitan governments can expect to spend between $5 million and $7 million, and potentially more depending on other equipment and network needs. The 911 program is studying the costs associated with the transition to help Congress develop a long-term funding plan.

For some state and local governments, the transition will mean installing entirely new digital 911 systems, said Evelyn Bailey, the director of the National Association of State 911 Administrators; for others it will mean paying to connect existing infrastructure to the new, digital networks.

“My guess is that people aren’t thinking about this and are not budgeting for it,” she said. “Those devices are not particularly cheap.”

Four states — Indiana, Iowa, Maine and Vermont — already have moved to Next Generation 911, according to NENA. Another seven — Connecticut, Hawaii, Massachusetts, North Dakota, South Dakota, Tennessee and Virginia — are doing so.

In at least five additional states — Florida, Illinois, Michigan, Ohio and Texas — city, county and local governments either have upgraded their systems or are in the process of doing so.

But in at least six states — Georgia, Missouri, Nevada, New Mexico, Oklahoma and West Virginia — it is unclear if any preparations for the switch have been made at the state or local level.

Bailey points out that 911 won’t disappear in places that are slow to adapt. But, she said, they are delaying the inevitable. Cities and states that wait to implement the new technology might ultimately spend more money as they patch together old and new systems.

This year, nine states enacted bills relating to the shift to Next Generation 911, according to the National Conference of State Legislatures. Many of the new laws had to do with funding and overseeing the new systems. Illinois lawmakers, for example, voted to create a single, statewide 911 system; Virginia laid the groundwork for building a state IP network to support emergency calls.

Next Generation 911 systems are necessary because there are significant gaps between the data that can be sent via cellphone over new networks and the information most emergency call centers are capable of receiving, said Trey Forgety, government affairs director for NENA. Because new types of communication, like Skype and FaceTime, are internet-based, smartphone users expect to be able to use that type of technology in all their communication, he said.

Finding callers who aren’t using landlines, which are registered to a physical address, has been a problem since cellphones became popular in the 1990s. Calls to 911 from cellphones are not routed based on the exact location of the caller, but on the location of the tower transmitting that call. This can lead to emergency calls getting answered by faraway call centers and make it hard for responders to locate the caller.

In some cases, dispatchers “had no idea where the call was coming from,” Bailey said. “And people died.”

The problem persists even though phones have progressed to include more sophisticated mapping technology. In 2014, a newspaper delivery woman drove into a pond in suburban Atlanta. She called 911 but her call was routed to the wrong center. The dispatcher failed to locate her in time.

Next Generation 911 will be able to use technology like Wi-Fi, Bluetooth signals and geographic information systems to find mobile callers, Forgety said.

For instance, office buildings could install Bluetooth beacons in exit signs, he said. When a cellphone pings that beacon during a 911 call, dispatchers can tell emergency responders which floor the call is coming from.

“If there’s something in the handset that can help us find a 911 caller, we ought to be using those,” Forgety said. “It’s silly that Uber or Google can find me and 911 can’t.”

Moving to the new 911 systems is a huge shift for lawmakers, and for administrators who have been running 911 systems on copper lines for nearly half a century. For many states, the challenge lies in deciding whether it’s worth investing in an entirely new IP network or paying to maintain old systems.

Some states have decided that even though phone carriers haven’t completely shifted to the high-tech networks, they’re going to build the new 911 networks anyway.

In Indiana, two telecom companies — AT&T and INdigital — are in the final stages of building two IP networks that will be able to take digital 911 calls from anywhere in the state.

The first of its kind deployment will allow local governments to save money as they patch into the state IP network, said Barry Ritter, director of Indiana’s 911 board. Having two networks will also make the system more reliable because one will be able to pick up calls for the other if it fails.

“If for some reason AT&T’s core were to suffer a catastrophic outage, INdigital will be able to receive and route any 911 call” in the state, Ritter said.

Digital IP systems in general will be more reliable because the network will continue to look for a way to put a call through, whereas cutting a hard wire in an analog phone system could render an entire 911 system useless, Forgety said.

But states that give local governments control of 911 systems will have less control over the Next Generation 911 transition and will likely spend more time and money converting their systems, Bailey said. Many of those will build IP networks, but it will be up to local governments to hook into them.

“All of a sudden,” Bailey said, “we could find little islands of 911 as analog, legacy technology, while everything around them is IP.”