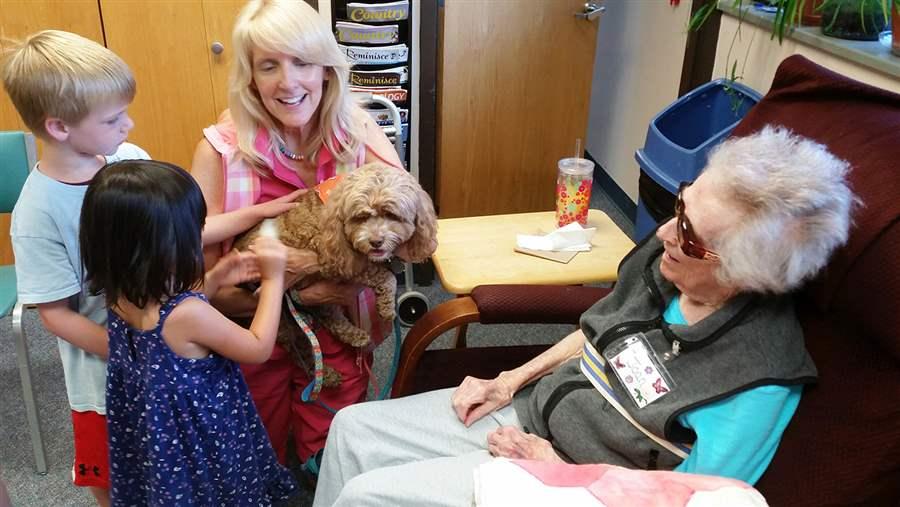 Maggie, a cockapoo and service dog, gets some attention at Virginia Tech’s adult day center, where preschoolers from the child care center across the hall often come to visit. As the country ages, several universities and communities have started programs that bring multiple generations together.

This story has been updated to correct Joan's age and details about the Virginia Tech program.

BLACKSBURG, Va. — As a music therapist strums his guitar and other seniors start to sing at an adult day center here, 83-year-old Joan, who has dementia, sits rigidly in her recliner, barely moving her lips.

But when five preschoolers come scampering in from the day care center across the hall, Joan brightens. She sits up, beckons them to come over, and chuckles as she watches them play.

By bringing old and young together, in an academic hall at the center of campus, Virginia Tech hopes to help older adults with conditions like dementia live better lives, while also teaching children how to be respectful and understanding of seniors and those with disabilities, and college students how to work with both groups.

So far there are few intergenerational programs like this across the country. But as the country grows older, more colleges and communities are trying such programs to build kinship and improve quality of life for people of all ages.

The programs can take many forms. Some are housed at universities; and several localities, including San Diego County and New York City, run programs that bring seniors and other adults together with teens and children for games and community projects. “It’s a way to feel connected to other generations, and to give back,” said Freddi Segal-Gidan, a gerontologist and director of an Alzheimer’s disease center at the University of Southern California.

Virginia Tech and Virginia Commonwealth University’s medical campus have been running intergenerational programs for years. Ohio State University opened a center in December, and Arizona State University is expected to have a center, by 2020, that will offer faculty and researchers the opportunity to study child behavior, aging and disabilities.

Research also shows that seniors have the time and the desire to give back. They want to feel valued, Segal-Gidan said, and not feel “they are being discarded.”

But programs that bring multiple generations together can be seen as just another expense for governments short on cash.

The key, said Ellen Schmeding, director of San Diego County Aging and Independence Services, is proving that the programs work, and that they matter. “We constantly need to tell the story of why this makes a difference — why does it matter that older adults are in the community.”

But these older adults will still have a lot to contribute to their community, said San Diego County Supervisor Greg Cox.

In 2002, San Diego County hired an intergenerational coordinator and started hosting events such as the Intergenerational Games, where adults 50 and over pair up with children for games and sports, such as Frisbee and badminton. The county now has five employees who organize events and help organizations start their own programs, and it spends about $1.3 million each year on staffing and events.

Under one program, the county hires 17- to 21-year-olds who are aging out of foster care for six-month internships and partners them with a county employee, who acts as a job coach, and a community member over 50, who acts as a life coach. Another program, funded by the county and the state, brings adults over 55, early childhood education staff and preschoolers together to learn about healthy living and tend to community gardens.

The volunteerism the programs foster is saving the county money, Cox said. During the last budget year, more than 41,500 volunteers — mostly seniors — provided the equivalent of $4.5 million in work, Cox said.

Joan, whose daughter asked that her last name not be used to protect her privacy, and other seniors at the Virginia Tech center say they love when their “neighbors” visit them. The children sit on the seniors’ laps and they read together, or they all play games, like tossing a ball with a parachute. The activities offer the physical and cognitive therapy and stimulation that the seniors often come here for and give children the chance to build friendships with people decades older than themselves.

But everybody’s favorite day is Thursday, when Maggie, a cockapoo and therapy dog, comes to play.

A 5-year-old girl sitting near Joan’s feet pulls a stuffed bear toy from Maggie’s mouth. “Look!” she says, lifting it up to show Joan. She opens her mouth and widens her eyes, exaggerating her surprise.

Joan was a middle-school teacher, said her daughter, Vicki Brackett, and children were her passion. Brackett, of Blacksburg, now cares for her mother and brings her to the center on weekdays.

Some local governments aim to use the background and career of adult or senior volunteers to help younger residents.

In New York City, the Department for the Aging runs a work-study program that partners high-school students from about 15 schools with older adults in senior centers, nursing homes and home care settings. The program’s director, Theresa Knox, says the goal is to guide inner-city youth.

“It’s an adopt-a-grandparent type program,” Knox said. “Some of the students go to the work sites even when no longer assigned.”

In San Diego, seniors can apply to live in a house near San Pasqual Academy, a county-run campus where foster teens live and go to school. The seniors must agree to mentor a student for at least 10 hours a week, but Cox said they often spend much more time with the students.

“They are at their football games,” he said. “They are cheering them on.”

But while those programs help teens, teens also have a thing or two to teach seniors. Generations United, a national nonprofit aimed at improving the lives of children and older adults by bringing generations together, has seen growing interest from local governments in programs that recruit teen volunteers to teach seniors about technology, said Sheri Steinig, the organization’s special projects director.

There are other ways governments can encourage interaction among age groups, Steinig said, such as combining public spaces like libraries and senior centers under one roof when building or renovating.

The Arizona State University Foundation hopes that a new building, projected to open by 2020, will connect many generations.

The planned 20-story assisted and independent living building is expected to have about 290 apartments, an on-site child care center, and programs that bring residents and children together. Students of music and theater would also be able to live there in exchange for performances. And researchers, such as those studying Alzheimer’s, would come to study the lives of residents.

Ohio State’s new intergenerational center, near campus, in Columbus, came about after faculty members said they were concerned with how to take care of both their aging parents and their young children.

The number of people across the U.S. with similar concerns — often referred to as the sandwich generation — is growing. Nearly half of adults in their 40s and 50s have a parent age 65 or older and are either raising a young child or financially supporting a grown child, according to a 2013 survey by the Pew Research Center. (The Pew Charitable Trusts funds both the Pew Research Center and Stateline.) About 41 percent of those caring for both kids and parents don’t meet or barely meet basic expenses.

The program relies on the Virginia Tech model, with a child care and adult day center in the same building and seniors and children mixing often. Students in medicine, social work and nursing study at the center, and faculty are set to begin doing research there.

At Virginia Tech, the seniors become animated, even giddy, when the children are around.

Joan sometimes doesn’t remember her day when she gets home, Brackett said. But that’s OK, as long as she had a good time. If she wasn’t at the center, Brackett said, she would be in bed, refusing to get up. “There would be no stimulation, no socialization — no nothing.”